As a co-founder of Romulus Summit Academy, Leann Hedke was intent on creating an atmosphere conducive to academic achievement.

Summit opened its doors in Flat Rock in 1996 for grades K-5, soon expanding to K-12 once the school moved to Romulus the following year. According to Hedke, in the last 10 years 100 percent of those graduating were accepted to a college or university.

Also, according to a 2017 report, Summit had the highest graduation rate among charter schools in Michigan and was ranked in the top 50 by graduation rate during the 2015-2016 school year. Summit, rated No. 17, had a graduation rate of 98.58 percent, nearly 20 percent better than the state average of 79.65.

Summit Academy North High School didn’t sponsor varsity sports until the early 2000s and, frankly, they weren’t very good, particularly in the sports of boys basketball and football. From 2004-2016 the football team boasted three winning seasons and made the playoffs once (2007). Until the 2019-20 season, the most wins the basketball team totaled was 10.

“Our focus has been on the scholar-athlete,” Hedke said. “We focus on academics. Our GPA (grade-point average) requirements are higher than what the (Michigan High School Athletic Association) requires.”

Hedke said there’s been quite of bit of turnover in the coaching ranks in boys basketball over the years. Part of this is due to the lack of success, as far as wins and losses, but some of this can be attributed to the high standards Hedke and her fellow administrators demand. Swearing is taboo, and a coach is expected to be a stickler for discipline, and must adhere to a strict decorum.

With the backing of Summit athletic director William McKoy, veteran coach Mark White, less than a month before the start of the season, was hired in November of 2018. Summit was 9-12 during White’s first season before showing vast improvement last winter finishing 16-4. Highlighting that season was the school’s first division title (within the Charter School Conference) and a spot in a Division 2 District Final against Flat Rock. Summit has never won a District title so this game loomed as the most important in school history.

Then COVID-19 hit, ending the season.

Summit returned four starters from that team and is off to a 15-0 start with the MHSAA Tournament less than a week away.  Most of its victories have been by double digits including last Saturday’s 71-53 victory over Taylor, a Division 1 school, and Tuesday’s 72-46 victory over Detroit Community in a conference tournament quarterfinal. Summit’s semifinal is scheduled for Thursday.

Two wins stand out in particular, and both came on the road. Summit defeated Harper Woods Chandler Park Academy, 54-51, on March 1 and then upset No. 3-ranked (in Division 2) Detroit Edison, 49-46, on March 8. Edison’s only other loss this season was to Warren De La Salle Collegiate, a Division 1 school, 72-68. Both Chandler Park and Edison are Charter School Conference members and have had strong programs over the years.

“All of our players got better during the offseason,” Lovejoy said. “(White) is an intense coach. He’s demanding. He’s constantly pushing us. He’s a perfectionist.”

Much of the credit goes to White for the recent success, but one can’t overlook the talented players within the school. Take the recent success of the football program for example. The football team was 0-9 in both 2015 and 2016. The Dragons went 5-4 the next two seasons before finishing 8-3 in 2019, a run which included an 18-12 victory over Redford Union in a Division 4 District opener, the program’s first playoff win. This past regular season was shortened to six games because of the pandemic, and Summit won two playoff games finishing 7-2.

“Summit is an excellent school,” White said. “They’re in line with what I want to be as a coach.

“There are more accolades for a team that hasn’t been that good in the past. (Winning) has never been done before here. I feel the best is yet to come, and not just for the team, but for the school as well. Gaining recognition in basketball helps promote the school. People will find out about how good Summit is as a school.”

Winning is anything but new for White. His first season as a head coach was at his alma mater Detroit Renaissance in 1998. In 2000 Renaissance, which had never played for a Detroit Public School League title, won the PSL defeating Detroit Redford, 41-37, in the championship game. Renaissance won the title again in 2002 and 2003. Renaissance then won two MHSAA Class B titles (2004, 2006) under White.

White left Renaissance after the 2005-06 season to become head coach at Adrian College, another alma mater. He spent seven seasons there before returning to the high school level at River Rouge. White guided River Rouge to the Class B Semifinals in 2017 and 2018.

White said he couldn’t be happier, at this time in his professional life, than he is now at Summit. In addition to his duties as the boys basketball coach, White is also the school’s academic interventionist and assistant athletic director. 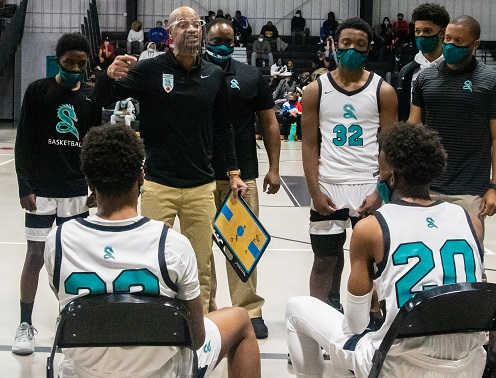 Lovejoy is aware of the success his coach has had at other schools. And even though Summit hasn’t achieved that type of success, he said anything is possible.

“We want to win our conference tournament, a District and Regional title, and the states,” Lovejoy said. “To some that’s farfetched, but it is realistic. We’re with a coach who’s done it before.

“This is special. (Summit) has never won a District, and here we are undefeated. We’re soaking it all in. We want to give the school something to cheer about.”

Lovejoy and his teammates recently gave Hedke a gift from their hearts. It’s a poster, a collage of sorts, with photos of the team in addition to pictures the players painted. This was in response to Hedke being a cancer survivor. She was diagnosed with breast cancer this past November and now is cancer-free.

“Mark is a wonderful coach,” Hedke said. “He focuses on what (the players) do well. He talks about who they are and what they represent. He teaches them to be aware. When I was going through my cancer, he told the players that we’re fighting on the court to win a game. She’s fighting for her life.”

The players have since dedicated their season to Hedke.