Basketball is all about scoring points and stopping teams from scoring.

Gage Kreski of St. Ignace is one of those rare players who excel on both ends of the floor.

Kreski eclipsed a 51-year-old Upper Peninsula scoring record this season while also establishing himself as a defensive ball hawk. That production helped him become Associated Press Class C Player of the Year in Michigan. He was also a three-time Division 7-8 all-state football selection.

Just two years ago, Lexi Gussert of Crystal Falls Forest Park became the all-time girls – and overall – scoring leader in the U.P. with 2,630 points. Allison Bailey of Ewen-Trout Creek had set the previous girls mark of 2,131 points in 1996.

"I was not focused on the record," Kreski said recently while on spring break in Panama Beach, Fla. "My goal was to make it deep into the playoffs."

The Saints (17-4), however, were upset by Boyne City in their Class C District opener.

A 6-foot-3, 195-pound point guard who frequently took his defender inside, Kreski scored 519 points this season. His career points will rank 15th on the MHSAA's career list for that category.

On defense, he set an MHSAA record with 450 career steals (Matt Taylor of Pinckney had 363 through 2000). Kreski also set a single-season record of 137 steals this school year and pulled down more than 900 rebounds during his career.

"I like scoring points, but defense is more important and I liked it a little more because I had to do the job," Kreski said, noting coach Doug Ingalls is a stickler about defense, highlighted by frenetic full-court pressure. "Defense first for sure.You play all-out on defense the whole game and the offense goes from there."

Ingalls also runs an offense similar to what he played under his dad, Jack, at Gladstone High School, using a motion approach – or perhaps freelance to a degree.

"We don't have many sets, but we know how to play basketball," Kreski said.

"For us to be good, he had to score a lot. It was all about winning for him," said Ingalls.

Ingalls admitted Kreski's weakness was shooting, but that he made up for it with a sterling overall game. "He has great instincts and is a very, very good athlete," said Ingalls. "I would get on his case because sometimes he was not aggressive enough going for steals. He has the length, the quickness and is savvy. He can guard anybody.

"He gets to the bucket and gets his points in many different ways. I can't imagine anyone being a better all-around basketball player. He is so good at making the right decision. He passes as well as anybody.”

At a time when perimeter scoring is stressed more and more – think of Steph Curry and other potent sharp shooters – Kreski made fewer than 35 shots beyond the 3-point arc this season.

That was drastically different than the method used by Jacobetti, whose career ended more than 20 years before the 3-point shot was adopted. A wing guard for three years before replacing his graduated brother at the point for his final season, Jacobetti's normal shot was from the perimeter, and usually well past today's 3-point arc.

He estimated perhaps 70 percent of his field goal attempts were outside that line, yet he unbelievably converted about 85 percent of his shots. "I shot basically from outside," Jacobetti said.

During his era, many small-school gyms were tiny, with well below regulation-sized floors that allowed offenses to get the ball into scoring range quickly. The feet of spectators often were on the playing floor, and at some gyms the base line was painted on the wall while the three jump circles were often intertwined. Jacobetti pointed out, "You didn't have much room to run an offense."

In his first game on the varsity as a freshman, Jacobetti scored 22 points and did not miss a field goal or free throw. He averaged about 12 points as a freshman, and then raised it to 22, 28 and 32 points per game, respectively, over his final three seasons.

Asked about a potential career behind the arc, Jacobetti said he has not really thought about it much because it wasn't part of the game at that time. "Wherever you had a shot from, you took it," he said of a fairly simple yet very effective approach.

Jacobetti finished three points ahead of Trout Creek legend Jim Manning, who finished his ended in 1961 with 2,137 points. Jacobetti's career ended in a tournament loss at Pickford and he recalled a Sault Ste. Marie sportswriter informing him after the game that he had just set the Upper Peninsula scoring record.

"I was shocked. I had no idea (about the record)," he said, noting it was not a big deal at the time, perhaps because it was only four years old. "It wasn't talked about a great deal." 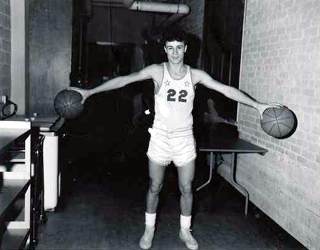 Jacobetti only remembers one time in his career when scoring was stressed. His coach at the time, Gordy LeDuc, told him the offense would run through him in a game at Negaunee's Lakeview Arena. Just a night earlier, Pat Groleau of Nahma scored 48 points and LeDuc said, "Duke, tonight you're going to break the record."

Jacobetti scored 52 points, but he said, "I didn't feel comfortable because everybody was giving me the ball."

Jacobetti and Kreski share the same idea about basketball. Jacobetti said, "It was win or lose, not really about the points." Kreski, in a telephone chat about 30 minutes earlier, said, "I just tried to win the game. It (McDonald's record) was a goal but winning was first, and for us to win games I had to score a little bit."

He knew about McDonald's mark, obviously, but didn't learn about Jacobetti's record until he was within about 300 points. "It was not the most important thing on my mind," he said.

He said Ingalls told him, "We're not going to do anything that we normally don't do. If it happens, it happens."

It happened Feb. 27 when Kreski produced a single-game best 46 points against Pellston.

"Records are made to be broken," said Jacobetti. "I never expected it to last as long as it did. Give that kid a lot of credit. I am very happy for him. He sure put in a lot of work and a lot of time. It is quite an accomplishment. I realize what it takes. I put in hours and hours myself (much of it on outdoor courts during winter with snow banks towering around the surface), and I know he did."

Ingalls confirmed that opinion. "I'm disappointed that other varsity basketball coaches didn't have the chance to coach him. They would be amazed at how hard he works.

"That work ethic comes from his parents. His dad Paul played football at Northern Michigan University, and his mother Deanna was a basketball player at NMU and was named to the Upper Peninsula Sports Hall of Fame in 2013.

"I have good genes, I guess," Kreski said, noting how both parents have put in time helping him pursue his hoops career. "They never really forced me to play or go work out. They made sure I had a positive attitude and (knew) how to be a good man.

"They have just been awesome in my life. They have had a great impact."
He said Ingalls "has been the man. He did everything for me, and my parents have been there for me all the time. Doug's wife (St. Ignace girls basketball coach Dorene) has pretty much raised me."

Kreski will finish his basketball career at the U.P. All-Star Classic in Marquette on June 18. He will put all his athletic focus on football when he reports to Central Michigan University as an invited walk-on in August. The all-state football player (he played quarterback and defensive back for the Saints) will likely play safety but could also become a wide receiver.

"My body is a little better suited for football," he acknowledged. "To be a point guard in Division I (basketball) you have to be 6-4 and be extremely lightning quick. I'm quick, but not lightning quick."

Just as he has adopted a sensible approach to his athletic future, knowing where he fits and where he may not, Kreski did everything he could to help the Saints before worrying about his personal achievements.

"I'm extremely proud of him and happy for him. I will follow his career at Central," said Jacobetti, who hopes to meet Kreski at the U.P. All-Star Classic.