IDA – Clay Sampson knows only one speed, whether it’s on the football field, basketball court or baseball diamond – it’s full go, all the time.

“He has such a passion for the game, no matter what sport,” said his basketball coach, Jared Janssen. “As a coach, you preach all the time about giving it your all for 32 minutes. The thing is, with Clay, he did it. He was always going all out.”

Sampson’s career at Ida High School is winding down, and Bluestreak fans will be sad when he’s no longer putting on a uniform and representing the Class B Monroe County school.

Sports always have been part of his life. His parents were both multiple-sport athletes in high school, as was his older brother, now 21. His younger brother, 15, is following in the same footsteps.

“I played four sports when I was younger,” said Sampson, who is about 5-foot-7, 145 pounds. “I think that’s where it started. I’ve always loved the competition.”

His parents have a deep sports background as well. His mom, Carrie, was a three-sport athlete at Ida and part of the Bluestreaks’ Class C championship softball team in 1989. His dad, Steve, was a Class C champion hurdler and record holder for the Summerfield track & field team in 1990.

“He’s the middle boy of three, and he’s probably our spitfire,” said his mom. “He’s a competitor. He’s a debater, too. I’m sure his teachers would say that. He’s always up for a challenge. He’s always been an intense kid.”

In football, Sampson was Ida’s quarterback, helping the Bluestreaks win 16 games over the past two seasons and extend their consecutive playoff streak to six. He threw for more than 500 yards and ran for more than 400.

He’s been a four-year varsity baseball player. As a freshman, he drove in the winning run as Ida won the first District baseball title in school history.

Sampson made his biggest impact on the basketball court. He finished this winter as one of the top scorers in Monroe County at 20 points a game and, despite being Ida’s point guard, was third in the county in rebounding at more than seven boards a game. His shooting has improved every season, he said, and this year he made 44 3-pointers. He also knew how to draw a foul. He got to the free throw line 178 times, shooting better than 74 percent from the stripe.

“I was a sad 3-point shooter as a freshman,” Sampson said. “It’s something I worked on all through high school. This year I was better at it. I was able to use my ability to shoot from outside to draw defenders and get to the free throw line. I didn’t go out there and just chuck up 30 shots or something. 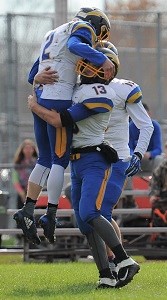 “Coach Janssen sat down with me before the season and told me that we needed a lot of scoring out of me. I knew I had to carry that load.”

Ida went just 1-20 during Sampson’s sophomore season but improved to nine wins the following year. This season, Janssen’s first, the Bluestreaks won 12 games, including back-to-back over Flat Rock and Carleton Airport, two of the three teams that shared the Huron League championship. The second of those wins, against Airport, gave Ida the District title. Sampson scored 28 in that game, including drilling 14 of 19 free throws.

“We started 0-2, but things changed after that,” Sampson said. “We had a lot of fun. No one expected us to win that many games or a District. It was great beating Dundee twice. I know my senior class had never done that, so that was awesome. Winning a District just put a great cap on the season.”

Sampson rarely came off the floor for Ida.

“A lot of people that play that way try and do too much,” Janssen said. “He always seemed to find that good medium. Everything he did helped the team, offensively and defensively. The pace he played at wasn’t too much.”

Sampson, who recently announced he would attend Glen Oaks Community College in Centreville and play basketball, said his parents never pushed sports on him or his brothers. He played in the recreation baseball leagues at Ida beginning in first grade and youth football through the community-sponsored team. He played on travel basketball teams from the time he was 10 years old.

“They introduced sports to me and my siblings, and it’s just always been part of our lives,” he said. “I couldn’t imagine not playing all of the sports that I played in. I don’t understand kids that just play one sport.

“Football is the No. 1 sport that shapes you. It’s a demanding sport. You have to be mentally and physically tough to go through a football season, let alone four. Basketball is probably my favorite, but football is a close second.”

No matter what sport Sampson plays, his family is a big part of it. In addition to his parents being at every game, his aunt, Connie Diesing, has been a strong supporter, sending texts before just about every game and being part of the community following his every play.

“I don’t think she’s ever missed a game,” Sampson said of his aunt.

Sampson is a Bluestreak through and through. The family lives in the house his grandfather grew up in.

“I think my mom is a little more competitive than my dad,” he said. “We joke about them winning state championships or holding records. It’s all in fun. My whole family is so supportive. It’s always reassuring that they have been there the whole time.”

PHOTOS: (Top) Ida’s Clay Sampson directs this offense this winter. (Middle) Sampson (2) is hoisted by a teammate during a playoff win over Dearborn Heights Robichaud on Oct. 26. (Top photo by David E. Phillips; middle courtesy of the Ida football program.)