EAST LANSING – The generations of Flint Beecher basketball rolled over again Saturday at the Breslin Center.

From the stands, stars of recent championships Monte Morris and Aquavius Burks cheered on the current Bucs, whose seniors were finishing the most impressive run in the program’s storied history – and preparing the next group to continue the tradition for years to come.

Ellison, Roland and Blake all were four-year varsity players for the Bucs, joining the team after Morris led Beecher to the 2012 and 2013 Class C titles. Hardnett saw the floor briefly in the 2015 Final and joined the starting lineup this winter. Filling out Saturday’s first five was freshman guard Jalen Terry, the presumed next star in a growing list.

“When I was in the eighth grade, Monte took me under his wing, and he was showing me all the rights and wrongs to get to the championship,” Ellison said. “Basically, that’s what I was trying to do with Little E (Earnest Sanders) and Little Jalen. So when the new set of guys come in, they can sprinkle a little joy and education to them.

“Basically, it’s just a slippery slope. Just tell somebody else, and everybody else is going to adapt to it.”

Beecher finished this season 23-5, and coach Mike Williams said he believes Roland, Blake and Ellison finished with 109 varsity games, which would tie at least Powers North Central’s Jason Whitens, and possibly Morris for the most in MHSAA history.

Morris, who just finished a fantastic career at Iowa State, had FaceTimed Ellison earlier Saturday, nothing new in a relationship that has continued since the mentor left for the next level. 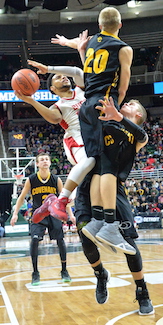 Ellison talked after the win about comparing his life to a book, and his “big brother” Morris certainly played a big part in writing this chapter. Ellison finished it by scoring 32 points as the Bucs held off a spirited push by Covenant Christian, which was playing in its first MHSAA championship game since 1994.

Unranked entering the postseason – while Beecher was tied for the No. 4 slot – the Chargers (21-6) played the Bucs to a tie in the first quarter and trailed by only three points heading into the fourth.

“I’m really proud of our guys. We had to believe to start the game we could win it, and I thought they showed that,” Covenant Christian coach Tyler Schimmel said. “I thought we got over the biggest challenge right as we left the hotel, and stepped off the bus. We knew a lot of people (in the media) and the arena didn’t think we had a chance, but we knew we did.”

Beecher’s seniors stepped in once more to close the door. After Terry opened the quarter with the Bucs’ first three points, the seniors scored the next 18 as their team pulled away.

Covenant Christian, meanwhile, made only 4 of 13 shots during the fourth quarter and tallied 10 of their 19 turnovers over those final eight minutes. Blake had nine points, but also 12 rebounds, four steals and two blocked shots while providing the most sizable obstacle to the Chargers’ comeback attempt.

“We talked about in the huddle, we have eight minutes left in your playing life, and what are you going to do about it?” Williams said. “And the whole thing is our identity is our defense. When the kids sit down, start applying the pressure, I think it really got to them.

“(Blake’s) been doing that for us for four years. He anchors our defense. He talks to everybody, and he’s one of the best defenders in the state. We wouldn’t be in the position that we’re in, winning our third state title, without this kid anchoring the defense, cleaning the glass. A lot of things that he does do not show up on the stat sheet.”

Roland added 15 points in his final game, and Terry had nine and six rebounds.

They’ll lead a lineup that should challenge again next season and won’t surprise anyone – including Beecher, if their paths should cross.

“There were a couple of times this season where probably people wrote us off, … but these guys have a ton of fight,” Schimmel said. “I think our fans and community have a lot to be proud of.”