Fremont is synonymous with babies, as the founding home of Gerber Products and host of the National Baby Food Festival each July.

Some of those babies grow up to be giants – as evidenced by this year’s Fremont Packers boys basketball team.

Senior Logan Karnemaat (6-foot-10) and junior Tristan Campbell (6-8) are the twin towers whose presence sets the tone on both ends of the court for the Packers, who are off to a 2-0 start and have high hopes for the rest of the season.

“I guess you could say we ate all of our baby food, and someone must have put some Miracle-Gro in there, too,” Karnemaat said with a laugh.

Karnemaat knows all about fertilizer as a third-generation farmer. He spends much of his time when he’s not in school or playing basketball working on his family’s 3,000-acre farm operation, which includes crops and livestock.

His life goal has always been to get a business degree and return to run the family farm, with playing basketball almost an afterthought.

When pressed on the subject, he said that both Grace Christian and Calvin College in Grand Rapids have shown interest in him, then quickly added: “There are two more I can’t think of off the top of my head.”

Karnemaat is clearly more focused on making the most out of his senior basketball season, which shows signs of great promise after an impressive 45-35 win Tuesday night at Ludington, which made it all the way to the MHSAA Class B Final in 2017.

“I’d say that was our biggest road win in 10-12 years,” said Fremont coach Peter Zerfas, who is now in his 19th year. “It was how we did it. Ludington is a very good team, but we came out with confidence and we were the more aggressive team.”

The scorebook does not tell the true story of the game, as Campbell scored only seven points and Karnemaat just five. The real story was the rebounding and shot-blocking of the twin towers – Karnemaat finished with 10 rebounds and Campbell had five blocked shots, with both of them altering and contesting countless others. 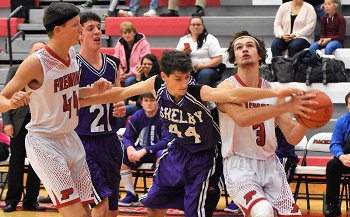 As a result of their presence, Ludington suffered through one of its worst offensive nights in recent memory, scoring just 18 total points over the first three quarters. Senior standout Josh Laman, who nailed the memorable 3-pointer in the Class B Semifinals two seasons ago to send the Orioles to the championship game, had no field goals in the first half and just 10 total points.

Fremont senior forwards Calvin Miller (11 points) and Julian Echavarria, who also have good size at 6-5 and 6-3, respectively, also contributed on both ends of the court.

Zerfas said the key to the big win was the play of his young guards, particularly junior starters Carter Moon (13 points) and Jaxx Miller, who held up under Ludington’s relentless full-court pressure during the second half.

“We have four young guards, and how well they develop will be the key for us this season,” said Zerfas, whose youngest son, sophomore Joshua Zerfas, is one of those young backcourt players. “We have the size and we have some depth, so if those guards keep coming like they are, we have a chance to be really good.”

Zerfas has the Packers competing at a championship level after back-to-back down years in 2015-16 (6-16) and 2016-17 (13-8). Basketball is a big deal in this small town, which has had some great runs in cross country but for the most part is known for baby food, farming and hoops.

Fremont has won a pack of conference and District championships, but Regionals has generally been the end of the road. In fact, the last time Fremont won a Regional championship was 1956, before losing to Stephenson that winter in the Class B Quarterfinals.

Shortly after Zerfas took over as coach in 2000, Fremont had a string of five consecutive District titles, with longtime nemesis Muskegon Heights ending the Packers’ run at the regional level in four of those five years.

Fremont fought its way back to Regionals last winter, before being humbled by Grand Rapids South Christian and finishing with a 17-7 record.

The Packers feel like they have even more pieces in place this winter and are eager to start work towards their first goal, a Central States Activities Association Gold championship, when they open league play Friday night at Reed City.

While he spends much of his time working in relative solitude on the family farm, there’s nothing he enjoys more than the contrast of playing basketball in front of a rowdy home crowd.

“Our students and our community come out and supports us, and it really helps,” Karnemaat said. “We have a good team, but then to have 2,000 fans behind you and get you going, I love it.”

PHOTOS: (Top) Fremont 6-10 senior center Logan Karnemaat holds the ball up high, well out of the reach of two Shelby defenders, during a 75-50 season-opening win Nov. 27. (Middle) Fremont sophomore Braiden McDonald, one of the contributors off the Packers' deep bench, drives to the basket. (Photos by Russell Tindall.)