PETOSKEY – Dennis Starkey remembers it like it happened yesterday.

Thirty-five years ago, at the age of 23, Starkey made his varsity head coaching debut with the Boyne City Ramblers.

“The first game I coached was against the legendary Charlie Paige (Harbor Springs),” Starkey recalled. “I got it handed to me pretty good. I knew I had a long way to go after that ballgame.”

Starkey learned quickly. Now, starting his 31st season as coach of the Petoskey Northmen, the 58-year-old is among the winningest coaches in MHSAA history. His 536 career wins rank 18th all-time among boys coaches – with an average of nearly 16 wins a season.

Starkey should move up that list in the coming weeks as the Northmen appear poised for a promising winter.

Petoskey opened the campaign by capturing its Tip-Off Classic last weekend, beating Marquette 55-38 and Manton 66-57. Marquette won 20 games a year ago, while Manton was a Class C semifinalist.

“It’s a great start,” Starkey said. “We played two good teams. We have a lot of work to do, but we’re excited. This is a good group. These guys were really committed during the offseason. Hopefully, that will pay dividends.”

Petoskey was an uncharacteristic 12-8 a year ago. That squad was comprised of three seniors and nine juniors – and one of the key juniors, 6-foot-9 center Danny Kolp, was recovering from knee surgery.

“I’ve always said you win and lose with seniors,” Starkey said. “Our inexperience really showed last year. Luckily, we’re loaded with seniors this year. We’re hoping to get back to where we were before.”

The Northmen were 20-2 two years ago.

Motivation should not be a problem.

“We were pretty unhappy with how we did last year,” senior Joel Wilson, a two-year starter, said. “I expect a lot from this team.”

“(High school) memories last forever, and we want to make this a memorable senior season,” he said. “We want to reach our full potential. We have a high ceiling.

“We have the athleticism and skills to make a run in the tournament,” he added. “That’s our goal. Petoskey hasn’t been to a Regional (since 2012). We have a good chance to do it this year if we keep playing as a team.”

Petoskey, which returns four starters, put its size and balance on display last weekend. Seth Mann, a 6-5 guard, averaged 17 points in the two wins. Kolp, who has signed with Northwood University, came up big in the paint, averaging 16 points, six rebounds and two blocks. The athletic 6-4 Wilson contributed 13 points a game, and 6-5 Jake Lee 9.5 points. All are seniors, as is starting point guard Collin Kingma.

Petoskey not only used its length to its advantage – especially defensively and on the boards – but played with a focus.

Dennis Starkey started this season much like he has the previous 34, preaching a “team first” approach. From there, he addressed the standards his program is built on.

Starkey asks that his players, especially his seniors, take ownership of the team. As a reminder, after each practice, the coaches step away as the players huddle on the court to dissect that day’s effort.

“The one thing I’ve always enjoyed about coach Starkey is that he emphasizes it’s our team and we can make it how we want to make it,” Kolp, a three-year varsity veteran, said. “We’re not going to be as good if he’s the only one barking at us. He holds us accountable, and we enjoy that challenge.”

“He likes to say we’re all coaches on the court, that we should be coaching and learning from each other,” Wilson added. “He stresses that every day.”

It helps, of course, to have a team that’s already tightly woven. The seniors on this team have been playing basketball together since fifth grade and are “buddies” off the court. 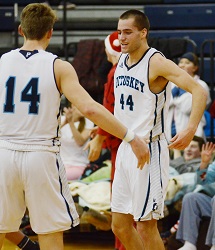 On the court, Starkey clearly sets the tone, though.

“He’s not afraid to get in your face,” Wilson said. “He pushes you hard. But it’s all for the better.”

“We try to play up-tempo as much as we can,” he said. “But we really rely on executing offensively and defensively in the half court.”

It’s an approach that runs deep in the system. Sean Pollion, Matt Tamm and Jason Miller all have 20-plus years coaching high school basketball at the school. Pollion is an assistant to Starkey, Tamm is now the JV coach while Miller just moved over to the girls program. In addition, Kevin Starkey and Jon Flynn, a star on the school’s two Class B Semifinal teams in the late 1990s, are assisting.

“That continuity means so much in high school basketball,” Dennis Starkey said. “Some programs have a hard time keeping coaches for extended periods. It’s been an advantage for us. It’s paid dividends.”

Starkey started honing his skills at Boyne City, serving a one-year apprenticeship under Bob Taylor, who went on to coach in the Great Lakes Intercollegiate Athletic Conference. He replaced Taylor, who took the Lake Superior State women’s job, and then left Boyne City after a season to accept a head coach/athletic director position at Vanderbilt. It was there he met his wife, Karen. After three years, Starkey moved on to Petoskey. To this day, former longtime Petoskey athletic director Gary Hice calls it one of the best decisions he ever made.

Inducted into the Basketball Coaches Association of Michigan Hall of Fame in 2014, Starkey has coached teams that have won 17 Districts and four Regionals.

Starkey would later coach his sons, Kevin and Cory. Cory, who went on to earn all-state honors, played at Bucknell and then a year professionally in Ireland. After earning his master’s degree in international finance, Cory accepted a job with an investment company in Chicago. His boss? Former Charlevoix basketball standout Scott Friske, now a senior vice president at First Trust. Friske and Petoskey’s Damon Huffman, Trevor’s younger brother, were teammates at Brown. Another former Charlevoix Rayder, Jared Hunt, also works at First Trust.

“Basketball opened a door for (Cory) in the business world,” Dennis Starkey said. “He’s been blessed. When you’re involved in this sport, you have so many contacts. And a lot of the northern Michigan guys look after each other. It’s a real special bond they create, all because of high school basketball.”

But the story is not over. Trevor Huffman is also in Chicago and lives with Cory. Huffman is still involved in basketball.

“He’s using basketball as an adult workout platform,” Starkey said. “He has guys come in and they do drills, much like we do in practice. So instead of going to the gym and lifting weights and doing cross-training, his clients, most of them former players, use basketball as a form of exercise to become more fit.”

After graduating from University of Michigan, Kevin Starkey headed back north and took a teaching/coaching job at Manton, serving as an assistant to Hiller. The Rangers first game that season?  Petoskey.

“That was bizarre, coaching against my dad,” Kevin admitted.

When Dennis Starkey retired as a physical education teacher, Kevin Starkey was hired to replace him. He’s now in his third year at the school.

It’s given Kevin a unique perspective on his dad. He played two years for him on varsity (2007-08 and 2008-09) and has now coached with him three years. When asked if he has a favorite story that encapsulates the type of person his father is, Kevin doesn’t have to think long.

“My senior year we were playing Charlevoix and I had just recently broken my hand,” he said. “It was my first game back. We didn’t know what to expect. When the game started, they were sagging off me because (the injury) was to my shooting hand. When I put up that first shot, I hit it. Then, all of a sudden, I hit five 3s in the first half. He never lets it go. It’s something I remember because he was so proud of me. It was my last (home) game and I was just trying not to air-ball it. Somehow, a few of them went in.

“Well, the next year when I came home from college – we sometimes watched old game films, or films of us growing up – he puts that game in first. He was like, ‘Man, that was so cool.’ I say that not because I need credit, but it was one of those things where he was more excited than I was for myself.” 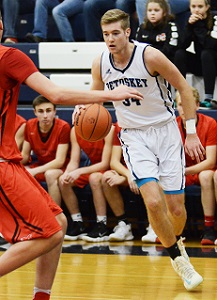 That, Kevin added, is how Dennis is with his players. He wants the best for them.

This team is no exception.

Kolp, who has had two knee operations, is finally healthy. His last surgery was in June of 2016, and he missed the first six games a year ago.

“He really wasn’t himself - until now, to be honest,” Starkey said.

In eighth grade, Kolp landed awkwardly on his right leg, tore a ligament and dislocated his kneecap.

“They couldn’t do the full operation because I was still growing,” he explained. “Two years later I blew it out again.”

Kolp, who plans to go into an entrepreneurial program at Northwood, spent this past offseason working hard in the weight room.

“I was in there five days a week, lifting to improve my upper and lower body,” he said. “Now, during the season, I’m in there two to three times a week to maintain my strength. I feel good. Everything is coming together.”

Wilson, all agree, is the most athletic player on the squad. He was a first-team all-Big North Conference pick as a quarterback and outside linebacker in football. Several colleges have expressed interest, and he is visiting Central Michigan this weekend and will miss Saturday’s game with Zeeland East. Central Michigan is recruiting him as a preferred walk-on with plans to use him at tight end.

“It’s (disappointing) to miss the game, but I have a decision to make that will (affect) the next four years of my life,” he said.

“Seth is a skilled shooter,” Starkey said. “He has good size and length. I think he’s going to have a great year.”

“With our size, if we get it into the post, and (opponents are) starting to play help defense from the backside, and Seth is in the corner, he’ll punish them for it,” he said.

It could be a special season.

Starkey, though, is not one to think too far ahead. He said the best advice he ever received was to “live in the moment, coach in the moment.”

And he knows there will be challenges ahead. There are no guarantees.

“As excited as I am with all the guys we have back, every coach in the league feels the same way,” he said. “Last year there was only one senior on the first and second all-conference team. It’s going to be a very good race.”

As for the future, Starkey, who credits a strong support system at home for his success, is not saying how much longer he’ll coach.

Kevin has an opinion, however.

“It’s something he’s really good at,” Kevin said. “I look at it like this: Don’t throw it away if you’ve still got it.”