CHARLEVOIX – Elise Stuck burst on to the scene with a 21-point, 11-rebound effort in Charlevoix’s season-opening win over Petoskey.

That was two months ago, but it was a harbinger of things to come.

Stuck, an athletic 6-foot-1 freshman, has registered seven double-doubles and one triple-double for the 9-4 Rayders, who are trending toward their best season since a 21-win campaign in 2008-09. Charlevoix was 3-19 a year ago.

The Rayders are achieving this with a lineup that features two freshmen and three juniors. Stuck – who “plays everywhere,” including the point – is the leader, averaging 18.7 points and 11 rebounds per game. She had 10 assists in a win over Gaylord last month.

“She’s the real deal,” Charlevoix coach Liz Shaw said. “She’s so fun to watch. She plays well beyond her years. One of her great attributes is passing. She sees the court so well. She makes everybody around her better. As a team, I think that’s why we’ve been so successful. And not only is she a great player, but she’s a great kid.”

Stuck struggled with her shot Wednesday in a 53-47 setback to Class A Traverse City Central. She still finished with 18 points (all in the second half) and eight rebounds. The Rayders could not contain Central junior guard Margot Woughter, who tossed in 27.

“All players struggle, but great players figure it out,” she said.

Stuck, who turned 15 on New Year’s Eve, comes from a basketball family. Her parents, Erica (Hall) and Matt, combined to score nearly 4,100 points during their all-state careers at Manton. In fact, Matt is seventh in MHSAA career scoring with 2,449 points. He went on to play four years at Oakland University and two years professionally overseas. He’s now in his first season as the Charlevoix boys varsity coach. Erica’s 1,649 points rank second all-time at Manton. She’s in the MHSAA record book twice for hitting 15 free throws in a game.

But those feats are seldom discussed now. Their focus is on the present – and their kids.

And the kids keep them busy playing multiple sports. In addition to basketball, Elise competes in volleyball (honorable mention all-state), soccer and track. Her twin brother, Luke, who’s been battling injuries, plays basketball, football and baseball. Caleb, a seventh-grader, is also a basketball player, although baseball is his preferred sport.

“We always wanted them to love sports,” Erica said. “We’re super excited that they share that same passion.

“Otherwise,” she added with a laugh, “I don’t know what we would do.”

Elise is an emerging talent on the court. She’s a difference-maker, even though she’s still learning the nuances of the game. The more experience she gains, the more she’ll improve, her father said.

“I’m a dad and a coach so I always say she’s doing well, but she has a long way to go,” Matt said. “She has a very good athletic skill set. She’s tall, can run, can jump. She’s a good athlete who’s becoming a good basketball player.”

That’s a role Matt didn’t have to take on when he was a freshman at Manton. Although he was a double-digit scorer on a team that reached the Class C Quarterfinals that season, the Rangers’ roster was stocked with strong senior leadership in Jeff Spalding, Cage Butcher and Chris Herndon. Spalding was an all-state guard.

By contrast, Charlevoix has just one senior on its girls roster this season.

“For me, the transition was easier,” Matt said. “I could just go play. Elise has had a bigger impact (as a freshman).”

Others have taken notice. Ron Stremlow, who coached Erica at Manton, compares Elise’s court presence to two former area standouts who went on to play at Michigan State.

“Elise is a Liz Shimek, Jasmine Hines type player,” Stremlow said. “She plays a different position, but she catches your eye as soon as the game starts.”

Stremlow saw Stuck play in a loss last month to unbeaten Kalkaska. He was not the only one impressed.

“Explosive,” Kalkaska coach Dave Dalton said in describing Stuck. “She can drive the ball, take it the length of the court, left or right. She’s big, strong, fast. She can play with her back to the basket. And she’s a really good passer.” 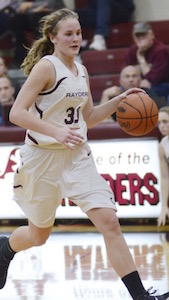 That’s why Shaw utilizes her all over the court, including the point.

“I don’t want to handcuff her,” she said.

Stuck’s game is still a work in progress, particularly on the perimeter. She acknowledges that.

“Coming into the season I had never played point guard or on the outside,” she said. “I was an inside player, and in crunch time I go to my inside game because that’s what I’m used to.

“I worked this summer on being able to take (defenders) one-on-one off the dribble. My outside shooting, shooting off the dribble, shooting under pressure, can definitely get better. That’s something I want to work on.”

Now that her players are settling into roles, Shaw said the Rayders “are getting better and better every game.” Abby Cunningham, a 5-11 freshman, has taken over at center, joining juniors Olivia Jeakle and sisters Rachel and Natalie Nesburg in the lineup. Shaw said last week’s 57-35 win over East Jordan was the team’s most “in sync” game of the season. Jeakle hit two 3-pointers early en route to a 14-point night. Natalie Nesburg chipped in eight points, six rebounds, five steals and five assists while Rachel added seven points, eight rebounds and five assists.

Cunningham is a close friend of Elise’s, and they have helped each other make the transition from middle school to varsity basketball.

“It’s fun to watch them have this kind of success together,” Erica said. “They love their team.”

Shaw is hoping this nucleus can help put Charlevoix girls basketball back on the map.

Charlevoix finished runner-up in the 2004 MHSAA Class C Final to Detroit St. Martin dePorres. That team was coached by Keith Haske, Shaw’s mentor. Haske is now at Traverse City St. Francis, where he led the Gladiators to the Class C Final last season.

Meanwhile, Matt, who runs his own construction company, took over the varsity boys job this season.

“I thought if I can help or contribute in any way,” he said, “why not?”

First, he had to make sure the added responsibilities wouldn’t drastically take away time from watching his kids play.

“Schedule-wise we decided as a family that it would work, that I wouldn’t miss any more games than I would have if I wasn’t coaching,” he said. “On Tuesday nights in our league (Lake Michigan Conference), the boys go one way, the girls the other. We were going to have to divide and conquer anyway.”

Stuck inherited a team short on varsity experience. The Rayders dropped to 3-8 after Wednesday’s night’s 58-45 loss to Gaylord.

But the coach sees improvement. He’s continually stressing fundamentals in practice, giving his players a base to become a better team.

Charlevoix has nine juniors on the varsity, plus a solid group at the JV level, so the future looks promising.

Luke, who has been dealing with kneecap tracking issues and a sprained LCL, returned to JV practice this week. The kneecap problem, he suffered last March, severely curtailed his baseball and football seasons. He was ready to go for basketball, but then sprained his LCL (lateral cruciate ligament) in gym class.

At 6-2, 210 pounds, Luke is a solidly built forward, whose strengths are rebounding and defense.

“He’s a pretty good leader on the court, too,” his father said. “He knows where everybody needs to be – and he’s pretty vocal. About four or five of those guys play travel ball together. It’s a good group.”

Luke was eager to get back in action. 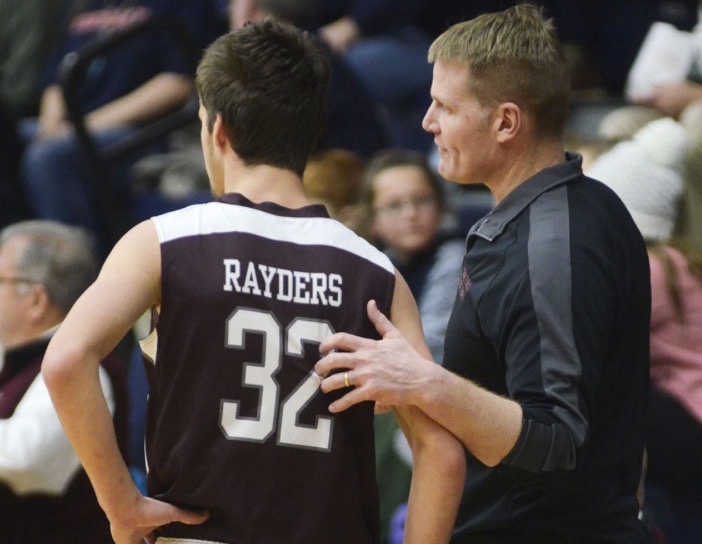 “It was interesting to see the other side of the game (sitting out while injured),” he said. “But it was really (disappointing) to not participate, knowing that you could be out there (contributing).”

Matt and Erica have coached their kids over the years. Both coached the girls 8th grade team last year. Then, Matt and Boyne City’s Randy Calcaterra, a Wayne State grad who played against Matt in college, coached 7th and 8th grade AAU teams that their sons played on.

Getting a handle on that dynamic is not as easy as it sounds, Matt said.

“That’s the hard part of having parents that have played and are coaches,” he said. “Randy and I would always say that coaching is hard, parenting is harder and being a parent-coach is hardest.”

As a parent, Stuck said he’s applies a rule he learned from his father.

“I ask my kids: Do you want me to tell you one thing that you need to work on?” he said. “That’s the rule my dad had when I was going through school. If you want to hear it, I’ll tell you. I apply that same rule. If they want to open it up for more, we discuss more.”

“Sometimes they might regret it,” he added with a chuckle.

Stuck averaged 24.7 points a game in his 99 varsity starts at Manton. He was coached by Rene LaFreniere.

LaFreniere said the 6-4 Stuck was more than a scorer and rebounder.

“The thing people didn’t realize is that he was such a good passer,” LaFreniere said. “He would get double- and triple-teamed and would always find the open man.”

For as good a ballplayer as he was, LaFreniere said Stuck’s an even better person.

“Special person, incredible parents,” he said.  “Humble, never gloated. It was like, ‘I’ve got a job to do.’ And he did it.”

Whereas Matt could use his size in the paint, Erica made her mark from the perimeter.

“She could shoot,” Stremlow said. “Her range was about 25 feet.

“Good upbringing, a coachable player, a team player who understood the game and really pushed herself. When I watch her daughter, I see those similarities.”

Erica, a math teacher in the Ellsworth school system, said the value of hard work was preached when she played.

“People always told me the harder you work, the more determined you are, that will determine how good you end up being,” she said.

The gym is still a home away from home for the Stucks. Countless hours are spent there on a daily basis.

It’s a lifestyle that works for the family. And they wouldn’t want it any other way.

“We don’t think anything of it,” Matt said. “We think of it as a regular day. We enjoy it. That’s all there is to it.”