Friday night, Coldwater High School will once again honor its 1949 Class B boys basketball champions and their coach, Floyd Eby, as it dedicates its gymnasium during a girls-boys doubleheader against Battle Creek Harper Creek. 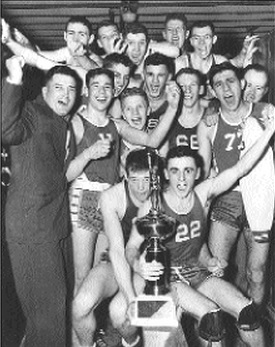 It was Eby and his Cardinals squad that introduced what was called “racehorse basketball” to the high school ranks in that championship season, forever changing the way the game was played, and launching one of the most storied coaches and teams – Lofton Greene’s River Rouge Panthers – to its place in basketball lore in Michigan.

Coldwater won that game at Jenison Field House in East Lansing, 49-42, and Greene told Eby, who also directed Williamston to a Class C crown in 1941, that his teams would play that style of basketball from that day forward.

That was the first time Eby and Greene crossed paths on the basketball court, and when that 1949 Coldwater team was honored in 1999 at the MHSAA Boys Basketball Finals, the two got a chance to meet again. Greene was watching his old school in the Finals that day, and Coldwater had just been eliminated in the Semifinals the night before.

You can watch a feature FOX Sports Detroit produced on the 1949 Cardinals below, and to read more about that season, click here.