It’s hard to overstate the importance of basketball to a community like Muskegon Heights.

On one hand, a bunch of kids playing a game in a gym seems like a low priority, almost trivial in a town whose violent crime rates and percentage of residents living in poverty are among the highest in Michigan.

But on the other hand, the “Tiger Pride” that is on display each time Heights alumnus Dell Stewart and his team of 13 players take the court – and the returning crowd of community members who are getting back on the bandwagon as the wins continue to pile up – could provide the spark to create real change in this beleaguered West Michigan town.

“Basketball has always been a source of pride in this community,” said Stewart, a 1989 Muskegon Heights graduate, who is in his fourth year as the Tigers’ head coach.

“Basketball and all sports almost ended here completely four years ago, but we weathered the storm. We’re back. And we want to be a source of hope and pride.”

The school is now known as the Muskegon Heights Academy, a public charter school which replaced the debt-ridden Heights district in 2012, but the basketball standards are as high as they have ever been in a community which boasts six MHSAA championships – 1954, 1956, 1957, 1974, 1978 and 1979.

Heights has its sights set on another banner after taking its high-energy show on the road Saturday night and improving to 10-1 with a convincing 55-45 victory over perennial power and longtime rival Benton Harbor, which was ranked No. 10 in the state in Class B.

The Tigers beat the “downstate Tigers” on Saturday with their trademark full-court pressure defense and multiple offensive weapons – and now should finally get a spot in the Top 10 of this week’s Class C Associated Press state poll.

The energy of the team starts with the backcourt trio of Jones and his twin brother, Anthony, and senior captain Anthony Gordon. The starters inside are 6-foot-3 sophomore center Kieshon Watson and senior forward Deondre Wilson, but Daniels (a 6-6 junior) and Brown also see plenty of minutes.

“The thing I like about this team is that every game it seems like we have a different leading scorer,” said Stewart, who is assisted on the Tigers’ bench by his younger brother, Terry, a sharpshooter on the 1993 Heights team that lost to Saginaw Buena Vista in the Class B championship game. “We don’t have a lot of size, but we make up for that in different ways. We have the pieces of the puzzle to make a run.”

The win at Benton Harbor was just the latest impressive road victory for the Tigers, who turned some heads with big tournament wins in December over Southfield at Grand Rapids Ottawa Hills and Lansing Sexton at Battle Creek Central. Heights also handed host Kalamazoo Phoenix its first loss on Jan. 22.

Fans at home are starting to take notice – and come back.

When “the storm” Stewart referred to made landfall in 2012, a state-appointed emergency manager had taken over and there was uncertainty about whether the district would exist for the upcoming school year, let alone have a sports program.

That uncertainty led coach Keith Guy and high-profile players such as DeShaun Thrower (the state’s Mr. Basketball in 2014) and Joeviair Kennedy (now playing at Western Michigan University) to go to neighboring Muskegon High School – and many longtime Heights fans went with them. Soon, the traditional football school was now the place to be for basketball as well, as Thrower and Kennedy were joined by 6-9 Deyonta Davis (now at Michigan State) for an undefeated season and Class A championship in 2014.

Amidst all the new-found Big Reds’ basketball hoopla, Heights basketball picked up the pieces. With longtime administrators Glen Metcalf (athletic director) and Jerry Harris (faculty manager) leading the way, Heights was able to lure Stewart away from his job as head coach at Reeths-Puffer and back home to be head basketball coach and dean of students. His first order of business was to convince kids that they did not need to transfer to find basketball success. 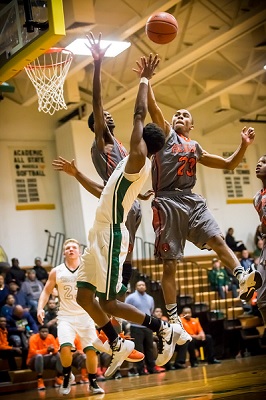 Stewart’s words were backed up by results in 2014, when the Tigers made a run all the way to the Class C Semifinals at Michigan State’s Breslin Center, where they lost to Pewamo-Westphalia.

“I looked up in the stands and saw some of the old fans coming back and even people I hadn’t seen in 15 years, people who were starving to be part of something positive in Muskegon Heights,” said Stewart.

The problem has been that for every step up, there have been two steps back in terms of the Heights’ image.

One month after the Tigers made it to the Breslin in 2014, starting center Marquis Gresham was murdered in a drive-by shooting. Last fall, Heights was back in the news for the wrong reasons, when a home football game against Muskegon Catholic Central was cancelled after a shooting earlier that day.

Those incidents weigh heavy on all of the town’s residents, but they seem 1,000 miles away, at least briefly, when the Tigers work their magic on the basketball court.

One of those Tigers having plenty of fun is junior forward Keshawn Gresham, Marquis’s little brother, who is one of 10 underclassmen on the Tigers’ 13-player varsity roster.

As he laughs and jokes with his teammates, as a big throng of community residents cheer on in support, one fact is apparent:

Basketball is more than just a game in Muskegon Heights.