EAST LANSING – Only three Detroit U-D Jesuit players have seen action in all 27 of their team’s games this winter.

Friday was further evidence of what the Cubs had been missing for parts of this season.

Now together and in game shape after injuries and illnesses, Jesuit has won its seven tournament games by an average of 28 points, adding a 63-25 Division 1 Semifinal win over Okemos to earn its second championship game appearance in four seasons.

The Cubs’ closest postseason win over the last three weeks was by 11 over league rival Warren DeLaSalle in the Regional Semifinal.

Total, Jesuit has won 19 straight games since its last defeat.

“It’s great being on the floor when we’re playing well like this,” Jesuit senior guard Daniel Friday said. “Everybody’s clicking and playing for each other and playing together. It’s really been a pleasure being with these guys on the floor. It’s been translating to blowouts; hopefully we keep that up.”

Jesuit (25-2) will take on Ypsilanti Lincoln in Saturday’s 12:15 p.m. Final at the Breslin Center, seeking its second championship to go with the Class A title won in 2016. Okemos finished 23-3.

Of course, it took only a few minutes into Friday’s press conference for the first questions to come about defending Lincoln’s freshman sensation Emoni Bates. Defense has been the Cubs’ strength as it’s worked through this season’s player absences, adding to the intrigue of Saturday’s matchup. 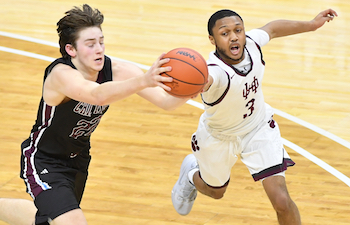 Jesuit has kept teams to 50 or fewer points 13 times this winter, including four times during the postseason. The Cubs held a usually strong-shooting Okemos team to 21 percent from the floor and outrebounded the Chiefs 34-24 including 28-7 on Jesuit’s side of the court.

The Cubs scored the game’s first seven points and led by double digits for good by 1:35 to go in the first quarter. They made 55 percent of their shots from the floor for the game, including 7-of-8 during a second quarter that saw them extend the lead from 13 to 21 points.

“They’re a really deep team. They have a lot of threats outside and inside, and we never really played a team that big before,” said Okemos senior forward Evan Thomas, who led the Chiefs with 13 points and six rebounds. “It was definitely a big challenge to stop them inside, then they’d start hitting outside shots too and it just piled on. I think we worked hard and did what we could.”

“It’s been a very interesting year in terms of starting lineups and who we’ve had available off the bench,” Jesuit coach Pat Donnelly said. “This stretch … we’ve had that opportunity to build chemistry, and that’s what I like. I remember looking down at the stat sheet in the first half and we had 15 field goals on 10 assists. These guys are unselfish. They play the right way.

They move the basketball. They don’t care who’s scoring.”