EAST LANSING – Detroit U-D Jesuit’s first trip to the Class A Semifinals in 2014 was filled with awe.

There was no longer awe Friday, and no less excitement – just a laser-like focus on taking the next step for the first time in program history, led by the best player to wear a Cubs uniform.

Senior guard Cassius Winston has played prominent roles in getting U-D Jesuit to the Breslin Center the last three seasons, and his 27 points and 12 rebounds were one of a few reasons the Cubs got past Macomb Dakota 72-51 in a matchup of undefeated teams considered the best in Class A heading into the postseason.

“Like I’ve said before, this is the final to my high school career, and I don’t think I’ve had a successful high school career unless we can win a state championship,” Winston said. “It means the world to finally get over that hump. We came in two years expecting to win it and came up short. Now we made it past that hump to make it to Saturday, so we’ve got to finish it off.”

The Cubs (27-0) will face North Farmington in Saturday’s noon Class A Final.

U-D Jesuit and Dakota were ranked 1 and 2, respectively, by The Associated Press at the end of the regular season, and both were playing to make an MHSAA Final for the first time. Dakota also was riding a perfect run, with the loss Friday ending its season at 26-1.

The Quarterfinal win over No. 4 Ypsilanti Community on Tuesday to make this third straight trip definitely was worth celebrating. But Cubs coach Pat Donnelly said hoots and hollers were replaced by a quieter focus that showed him again that his players were all business. 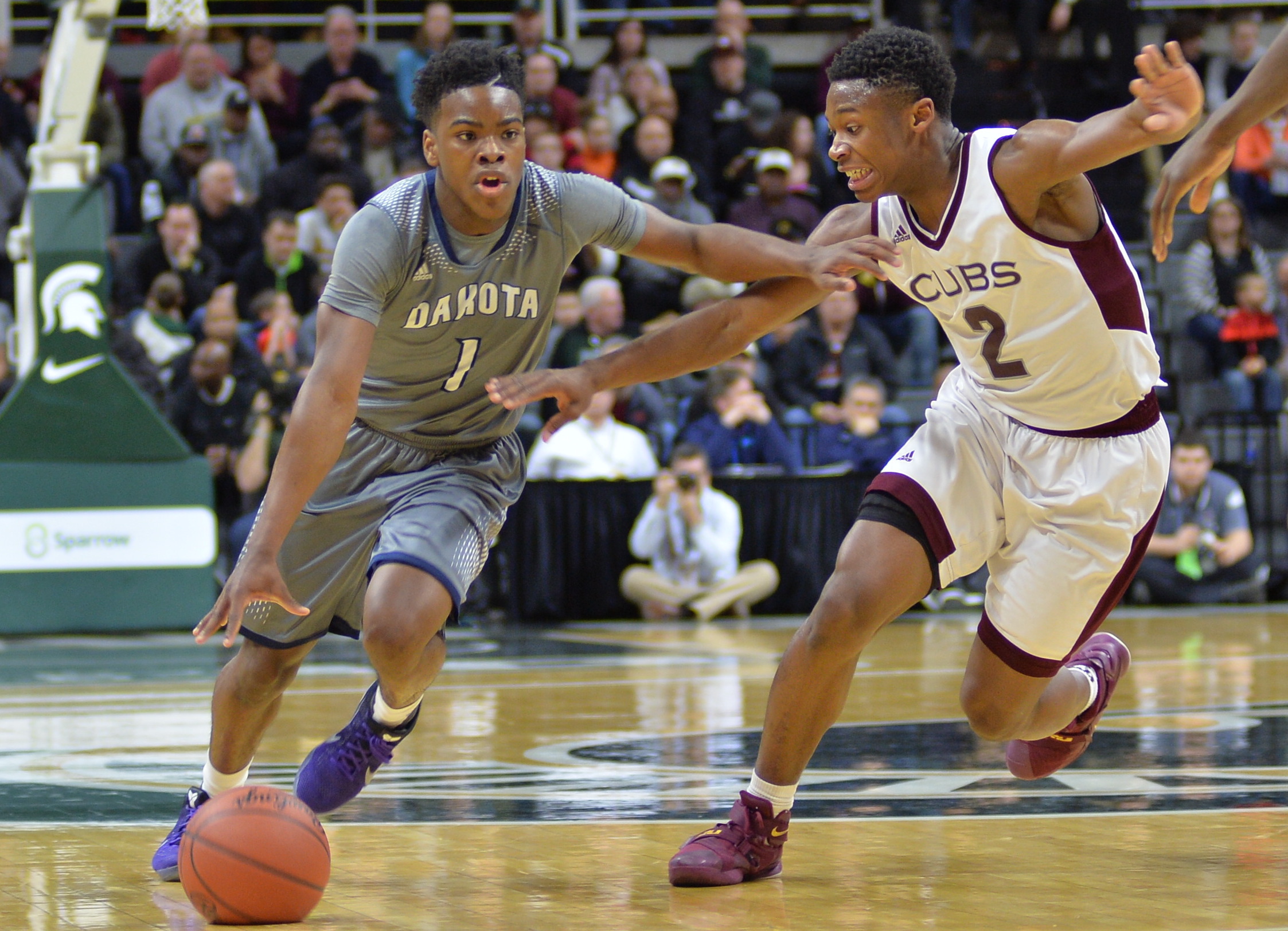 “We did discuss the last two years and the feeling that we had leaving here Friday afternoon, and we talked about that throughout the season,” Donnelly said. “That allowed us to win the Quarterfinal and be very focused walking off the floor. … I think you saw the result of that today.”

It was quickly apparent during an 18-3 run that began 2:41 into the game and ended 2:28 into the second quarter with U-D Jesuit up 25-9. The lead grew to as many as 25 points as the Cubs also held Dakota to its second-fewest in a game this season.

The more sizable U-D Jesuit outrebounded the Cougars 39-24 and also shot 58 percent from the floor to Dakota’s 35 percent success rate, which got off to a cool 19-percent first-half start.

Winston, who will next play at Michigan State and was named the state's Mr. Basketball on Monday, made 8 of 16 shots from the floor in front of a Breslin crowd that included a full lower bowl and a number of fans in the upper bowl as well.

“That was probably the hypest game I ever played in,” Dakota junior Jermaine Jackson said. “Cassius is a great player. Mr. Basketball coming in, that’s a tough task.”

Donnelly said he told Dakota coach Paul Tocco after not to let a Breslin loss take anything away from an excellent season, as the Cougars were now experiencing what the Cubs had experienced twice before.

“Obviously we’re disappointed, but we’ve very proud of the season we had,” Tocco said. “I know the experience of losing to Clarkston in the Regional championship last year was a big-time motivator for us to move beyond that point. It motivated our entire program. And we took another step, two steps, beyond that this year.

"To get here, I’m not going to lie – it’s a lot of fun. We tried to treat it as a business-type trip. We weren’t just happy to be here. We just got outplayed tonight.”