BRIMLEY — Rankings are nice, but the Brimley boys are looking for more as they roll through this basketball season.

The Bays, ranked No. 1 statewide in Division 4 by The Associated Press, improved to 16-0 with a 72-46 triumph over St. Ignace on Tuesday.

Brimley’s run has continued a progression that saw the varsity finish 5-16 in 2014-15 and then add to its win total every season over the next three – going 20-5 and winning a District title last winter.

“Part of the reason for our success is team chemistry,” said 6-foot-3 junior guard Zach Gross. “We went undefeated from the fifth grade on. We’re excited about the ranking, but that only motivates us to work harder. We know there’s a target on our back. Everybody wants to beat the No. 1 team in the state.”

The Bays are well aware of the challenges in store for them during the postseason, where expectations will be high to match that top ranking.

The U.P. has enjoyed a wave of success in the smallest-school bracket especially this decade (the classification changed from Class D to Division 4 beginning this school year). North Central won three straight Class D titles from 2015-17 and also made the Semifinals in 2013. Dollar Bay made the Semifinals last season, following appearances as well by Eben Junction Superior Central in 2011, Carney-Nadeau in 2012 and Cedarville in 2014. Cedarville also made the Quarterfinals last season, losing to Dollar Bay, and has won six Regional titles over the last 10 years.

Brimley took a major step toward assuming a place among the elite, clinching the Eastern Upper Peninsula Conference title last week, outpacing Cedarville and Engadine after finishing second to the Trojans last season.

“Rudyard, Engadine and Cedarville have the strongest teams, which helps us get ready for the tournaments,” Gross said. “Rudyard has a very good defensive team, and Engadine has a run-and-gun offense. They (Engadine) have Andrew Blanchard, who’s a senior guard and a great athlete.”

“Rudyard played a great game here,” said Brimley coach Joel Moore. “That was our closest game, although we had one guy injured. Another was sick and Marcus (Harris) was cramping up. Engadine was probably our toughest game (in a 79-67 victory Jan. 25). They match up with us pretty well. They can score in bunches.”

The Bays have shown on numerous occasions they also can score in bunches, which was evident in their 104-70 victory at Engadine on Dec. 6.

“The transition game is our strength,” said Harris, a 5-10 senior guard. “We have a lot of speed. We’re kind of an explosive team. We’re capable of putting up 90 points on any given night.”

Brimley is also aware of the possibility of teams taking the air out of the ball as DeTour attempted Nov. 30 when the Bays won 83-49. 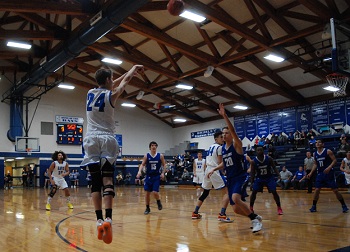 “They tried to go with a delay offense,” said Harris. “We jumped on them early, then it was 13-13 after the first quarter. I think that prepares you a bit. There’s always a chance we could see that in the District.”

“If we see that in the District, I think we’ll be prepared for it,” 6-0 senior forward Hunter Lipponen added. “Our transition game has worked well. We don’t have the real big guy, so everybody has to be able to handle the ball. We have the ball handlers. We also have the speed, and we try to utilize that.”

A victory over Bay Mills Ojibwe Charter in the District opener Feb. 25 at Rudyard would set up a third meeting with Engadine two nights later. The District championship game is set for March 1.

“Ojibwe plays with a lot of pride and heart,” said Moore. “We can’t overlook anybody. Sometimes the hardest thing is to get out of the District because the teams are very familiar with each other. We have to stay humble and hungry. We can’t put much stock into the rankings.”

But the Bays can take confidence from what they’ve accomplished so far.

Brimley opened its season on a positive note, winning 73-49 at Cedarville.

If the Bays win the District, they could potentially see Cedarville for the third time or Ski Valley Conference leader Pellston in the Regional. At that point, Brimley would be seeking its first Regional title since 1995, when it won its fourth in six seasons.

“Pellston is pretty good,” said Lipponen. “We saw them at team camp. They have a big guy underneath who has some very nice footwork.

“It’s very exciting. But we have to take it one game at a time.”