EAST LANSING – The last two weeks have seen Hudsonville Unity Christian thrust into the statewide spotlight with a pair of wins over teams expected to contend for this season’s Division 2 title.

But the Crusaders have belonged in that conversation all season as well, and showed why again Friday in clinching a spot in their first MHSAA boys basketball championship game since 1973.

Unity Christian ran its winning streak to 21 this winter with a 69-30 victory over Ludington in the night’s first Division 2 Semifinal at Breslin Center.

“We talked about flying under the radar because we’ve done that all year long, and that’s been a good thing – that’s fine with us,” Unity coach Scott Soodsma said. “I think we have just really turned it up a notch. These kids are just winners, and they were getting close to the end of their careers, and they want to go out champions. So I think they just actually on their own decided to turn it up a notch.”

But the program has been building toward this opportunity. Last week’s Regional title was its first since 2008, but Unity won its third straight league and District championships rolling toward the end of February.

The Crusaders led Friday for all but 59 seconds when the teams were tied early, and by double digits for the final 27 minutes. The lockdown defense added to a postseason effort that has seen Unity give up only 47 points on average over seven playoff wins. 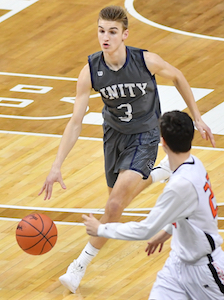 “There was stuff we thought was open when we went in at halftime, but our offense was being played so far away from the basket and so far off the 3-point line that we had a heck of a time taking advantage of any of those things,” Ludington coach Thad Shank said.

“When you’re a team that can really pressure the ball like they do, you don’t even have to play great defense behind that ball pressure because it causes so much havoc.”

On the other side of the court, senior guard Noah Wiswary was the only Unity scorer in double figures with 17 points. But while 12 players got on the board, the team’s shooting percentage stayed at a sparkling 59 percent from the floor for the game. Unity also had 18 assists on 29 field goals.

Although ending on a tough note, the Orioles provided one of the surprises of the tournament. They entered the postseason 9-10, but defeated five opponents all with at least 13 wins to make it to the Semifinals for the second time in three seasons. Ludington finished 14-11.

“Going into the postseason 9-10 definitely isn’t easy when you’ve got a bunch of people looking at you, looking at the first game of Districts and thinking oh, they don’t have a chance,” Ludington senior Sam Bandstra said. “But in the postseason we came together as a team. It wasn’t about us, and we came out and played as a team, and we shocked some people. When we’re playing the intense defense we were playing and really moving the ball and playing as a team – we came together at the right time.”