He was a four-year starter on a Detroit U-D Jesuit team that reached the Breslin Center three times, earning a scholarship to Michigan State University and the Mr. Basketball Award.

But Winston didn't become great by settling for less than perfection.

And now he has what is undeniably the perfect ending to a glorious career.

Embracing the pressure of performing on the biggest stage in the sport, Winston scored 31 points and dished out nine assists in the Cubs' 69-49 victory over North Farmington in the MHSAA Class A championship game Saturday at the Breslin Center.

It was the first MHSAA title for U-D Jesuit, which romped through the Class A tournament to complete a 28-0 season. The Cubs had never gone as far as the Quarterfinals until Winston led them to Semifinal appearances in 2014 and 2015 before taking them all the way this season.

Winston lived up to his considerable hype, going 14 for 16 on the court he will call home as a college player. He drove to the basket at will, while also going 2 for 3 from 3-point range.

"It's definitely a good feeling, knowing that I'm capable of playing that way in this gym," Winston said. "The past couple times, it didn't look too good on this floor, but today I got it going. It's just the perfect moment. State championship. Great game. Then I'm headed right back here in a couple months, so it's the perfect way to end it."

Winston is the first to recognize that he would not have enjoyed a perfect ending to his career without a strong supporting cast. Scott Nelson scored 13 points off the bench, Ikechukwu Eke had 10 points and 13 rebounds, and Gregory Eboigbodin had eight points and eight rebounds for the Cubs.

"Everything you want in a basketball team, we have," Winston said. "We have Matt Schearer. I don't think he took a shot today, maybe one. He doesn't mind. He's gonna play defense, he's gonna get rebounds, he's gonna do what you need to do. We've got Ike and Greg, who average 10 points and 10 rebounds. We've got dudes who come off the bench. Everything you like in your basketball team, we have this year. That's why we became successful." 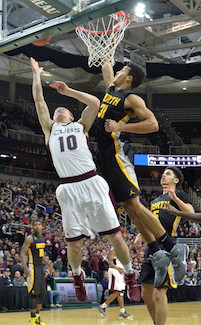 "Eight years ago, I sat in front of a search committee and I told them I thought U of D was a great place," said Pat Donnelly, who has a 142-42 record in eight seasons with the Cubs. "It had the academics. It had great tradition. I thought this was a place we could win a state championship.

"I have to give credit to the guys who have played in our program from the time I got there, how they accepted me, accepted a culture change in how I operate and how we operate as a program. Every year, we've gotten better."

Jesuit never trailed, scoring the first six points of the game on baskets by three players.

Perhaps the biggest indication it wasn't North Farmington's day came when it had a chance to take its only lead – and a dunk off a steal missed with 53 seconds left in the first quarter.

The Cubs, who were leading 16-15 at the time, responded by scoring eight straight points to begin a 14-2 run.

North Farmington got within 34-27 late in the first half, but Jesuit scored the final five points of the half to take a 39-27 lead into the break.

"We felt like if we could try to keep Cassius out of the paint, we'd give ourselves a chance," North Farmington coach Todd Negoshian said. "That's the best I've seen him play in four years. I don't know if it was the big stage or his final game, but that's the Cassius Winston that's going to Michigan State."

North Farmington couldn't get closer than 12 points in the second half, that coming when Jacob Joubert hit a 3-pointer with 6:43 left in the third quarter. A 9-3 run after that gave the Cubs a comfortable cushion the rest of the way.

Nelson scored eight of his 13 points in the fourth quarter to help Jesuit maintain a safe margin over the Raiders.

Billy Thomas, who had 21 points in the Semifinals as a sophomore at Jesuit two years ago, led North Farmington with 23 points.

"That's my brother," Winston said of Thomas. "I want the best for him. Of course, we're playing for a state championship, so we have to limit the best."

The Raiders finished 24-3, reaching the championship game after never having been beyond the Regionals.

"I can't say enough about this group of kids, what they've meant to our program, what they've meant to our school and to our community," Negoshian said. "They've left an impression and a footprint, not just from a basketball standpoint, but from a life standpoint on how to behave, how to carry yourself, how to represent yourself and your family in the proper way. This goes way beyond the basketball court. There's not enough words to describe how proud I am of them."