PAW PAW — Ethan Van Der Slik has some definite goals in mind when it comes to bowling.

The Paw Paw junior is aiming to break personal records set by his mentor and grandfather, Rich Van Der Slik.

“When I heard that I said, ‘Good for you. Beat this old man,” his grandpa said.

The younger bowler has plenty of time to catch up.

So far, Ethan has one 700 series. But there are plenty of opportunities ahead – both for individual achievements and as part of a Paw Paw varsity with experience from last season and aspirations to finish this one even better.

Van Der Slik is the youngest on a senior-laden Paw Paw team that won its Regional last year and is 2-0 this young Southwest Michigan High School Bowling Conference season.

However, after dominating performances at the local level last year, the boys underwent an eye-opening experience at state competition.

Bowling was one of the few winter sports that actually competed through the Finals during the 2019-20 winter season, and the Red Wolves hope to build on that experience if they return to the MHSAA Division 3 Finals this March 26-27. At last year’s Finals, Paw Paw missed the team match play by 148 pins during qualifying despite showing potential with an 852 regular game and high Baker of 187.

“Competition is a lot harder outside our little town,” said Derek Ballard, one of five seniors on the team. “You can’t get nervous; you have to keep striking. You can’t get away from what you do just because you’re in a bigger town.

“The important thing is, if you’re nervous, you’re going to miss your mark. You’ve got to keep steady and if you keep steady, your shots are going to look good.”

“I bowled for 44 years and quit when my shoulder said it didn’t want to do it anymore,” Rich Van Der Slik said. Now he spends his time at bowling centers working with his grandson. 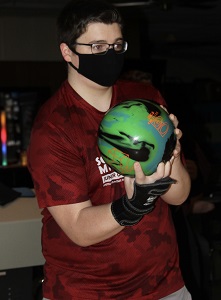 “He’s thinking ahead. He knows when it’s time to make his ball changes.”

Trying to best his grandfather “pushes me to be better,” said Van Der Slik, who has a few warmup routines before his Saturday high school matches.

He and his grandfather go to breakfast, then he shoots splits and strikes at Continental Lanes when the high school match is not there.

Although baseball is his other sport, Van Der Slik also throws a football before matches, an exercise he learned from Scott Brunner, who has the pro shop at Continental.

“It helps me get my hand through the (bowling) ball better; shows me the spin,” Van Der Slik said.

Paw Paw bowling brings together the Zolp family as well.

Boys coach Chuck Zolp is in his 22nd season. His daughter, Jessica, coaches the girls and “I’ve been working (at Rainbow Lanes) since 1972 and bought the place in 1979,” Zolp said.

That is a big advantage for both teams since they do not have to worry about scheduling practice time.  While the Red Wolves boys are an experienced contender, they are relying on a new anchor, Ballard, after the team graduated Michael Hiestand last spring.

“(Derek) helps with the rest of the team, coaches them in-between matches and in practice,” said Chuck Zolp, in his 22nd year coaching the team. “He’s very consistent. He brings a lot to the team.”

The other seniors on the team are Peyton Long, Zach Dooley, Christian Johnson and Vaughn Stiglich. Long, Dooley and Stiglich all bowled during last season’s Singles Regional as well. 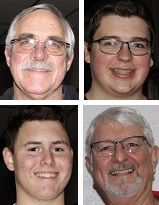 He started bowling at a young age.

“There was a youth sign up out here (at Rainbow) and I asked my dad (Doug) if I could join and I never stopped,” he said.

The biggest differences for bowlers this year are wearing masks and having no spectators. However, MHSAA guidelines allow them to drop the masks at the approach.

“It’s kind of hot after a few games, but it’s not bad,” Ballard said. “We can take it down on the approach, but I usually don’t because it’s annoying to pull it down. I have no problem with it.”

Van Der Slik, who also has no problem with the mask, is aware of his role on the team.

“Being the young guy, I’m going to be the only one here next year so I’ve got to do what I can to make the team better,” he said.

“I see myself as almost the middle man, trying to keep everyone happy and doing the best I can.”

The lack of spectators also does not bother Van Der Slik at all.

“It’s actually not as bad as you would think because I’m a very loud person,” he said. “Everyone hearing me, it’s definitely a scary thing for them but fun for us.”