Jeremy Moore had wanted to get a bowling program going at Cadillac High School for a while.

It appears the Vikings picked the perfect time to give it a roll.

More than a month into its first season, Cadillac’s boys bowling team is undefeated and already the champion of the Big North Conference, winning the lone tournament on the league schedule Dec. 2 in what also was the Vikings’ season – and program – debut.

They edged host Gaylord 338-324 in the championship match that afternoon and have yet to be defeated, earning the MHSAA/Applebee’s statewide “Team of the Month” for December.

“We’ve had our core varsity team. These six guys bowled together in youth leagues for several years,” Cadillac coach Jeremy Moore said. “A couple of them are my nephews, and all of their parents bowl.

“We had high hopes. But when we went in and won (the Big North), now we know they’re really good.”

Cadillac will compete in Division 2 during the MHSAA Tournament, and it wouldn’t be shocking if the Vikings found their way into the first state rankings released Friday by the Michigan High School Interscholastic Bowling Coaches Association.

If not, it could just be a matter of the good word continuing to get out. Cadillac also bowls in the Greater Northwest Bowling Conference with a number of schools from the northwestern corner of the Lower Peninsula (including others from the BNC), and has yet to be challenged. The Vikings are winning their matches by an average score of 28-2.

All six are juniors or sophomores. Sophomore Kyle Vermilyea is averaging a team-high 224, followed by juniors Tyler Campbell (193), Brandon Foster (191) and sophomore Korbin Keller (190). Sophomore Kyle Perry adds a 176 average, and junior Brennen Dagner has been effective in limited frames as the team’s sub. 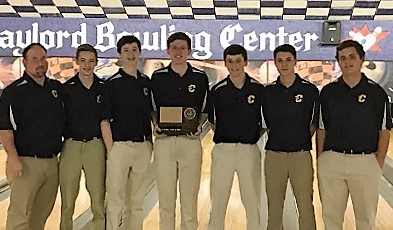 Moore, who works at The Pines bowling center in Cadillac, worked with first-year athletic director Fred Bryant (formerly of Newberry) to add boys and girls programs this season. Moore coaches both.

As noted above, he knew he’d have talent on the boys team. Multiple Vikings had won Junior Gold youth events downstate in the past, and two of his bowlers had competed well against members of the Lowell team that won the MHSAA Division 2 championship last winter. (Cadillac’s girls, meanwhile, entered the season with far less experience but are a solid 4-2 and took fifth in the BNC tournament.)

There have been small adjustments to make for high school bowling. Cadillac is learning the Baker format a bit on the fly – in a Baker game, all five bowlers take turns bowling a frame with two turns per game apiece – but that’s hardly slowed them down. They’re looking forward to continuing to see where they fit among Michigan’s high school elite as the season progresses, especially when the pressure gets higher during Regionals late next month.

Not new is how much Moore’s tight-knit group enjoys competing. But now the Vikings are getting to show their talents while representing their school.

“Up here there’s not a lot to do, so they’ve spent a lot of time in bowling alleys. They had a lot of games under their belts before high school started,” Moore said.

“They’re just always amped up in practice, always pushing each other. These guys have bowled together in youth leagues, and they’ve been friends a long time. They’re always together, wherever they go.”

PHOTOS: (Top) A Cadillac bowler starts a frame during competition this season. (Middle) The Vikings celebrate a Big North Conference championship in their first event as a high school program. (Photos courtesy of the Cadillac athletic department.)