JACKSON – At a time when it needed them most, strikes became contagious for the Corunna girls bowling team late in the third and final game of the MHSAA Division 3 championship match Friday at Airport Lanes.

Freshman Morgan Gilbert caught the bug initially. Bowling in the leadoff position, Gilbert struck from the fourth through seventh frames as Corunna wiped out a deficit against Coloma.

In that seventh frame, three of Gilbert’s four teammates followed with strikes as the Cavaliers defeated Coloma 1,233-1,170 for its first MHSAA championship in bowling.

“We didn’t really have anything going on, and someone needed to step up,” said Gilbert, who rolled 201 in the deciding match. “I felt like we needed to do it now, and if we didn’t do it, then we weren’t going to do it at all.”

Corunna, which a week earlier won its Regional at Eastland Bowl in Kalamazoo, was first after the morning qualifying by five pins ahead of Coloma. The Cavaliers defeated reigning champion Croswell-Lexington in the Quarterfinal and Grand Rapids South Christian in the Semifinal.

In the title match, Coloma won the first Baker game 183-144, and Corunna took the second 201-162, making it even going into the third and deciding individual match. Coloma started strong in the third game before Corunna regrouped.

“I was a little bit concerned, but these girls know what they have to do to battle back,” Corunna coach Ryan Koyne said.” They never give up. We had some nerves out there, you could definitely tell. I might have been the most nervous out of the entire group.”

Junior Hannah Eldridge, who made the Singles Semifinals a year ago, led Corunna with a 208 from the third spot.

“In the individuals you are by yourself, but winning states with a team is so different,” she said. “We just tried to keep each other going and keep making spares, but it was very nerve-wracking. I’m really proud of our team.”

“There are no emotions to describe this,” Scott said. “It was the most thrilling thing you could ever think of. You can’t understand the feeling of winning states.

“It had never been done at Corunna before until today, and I’m the happiest person on earth right now.”

Howes said that bowling well late in games was something the team had done all day.

“I believed we could come back because most of the games we bowled today we were behind in the first five frames but then in the last five frames we came out and won,” she said. “I am very emotional right now. Being a senior and winning conference, regional and state is just beyond how words can explain.

While winning in come-from-behind fashion was nothing new for Corunna, it was a new sensation for Armada’s boys, who trailed by 38 pins after the two Baker games before beating Richmond 1,202-1,166 to win the MHSAA championship.

“We started out good and then sort of hit a soft spot, but we pushed through,” leadoff bowler Edward Seefried, a sophomore, said. “There wasn’t much concern because we know we’re a good singles team and we could pull through. We really hadn’t fallen behind before, so we had to come back, so that was a little different.” 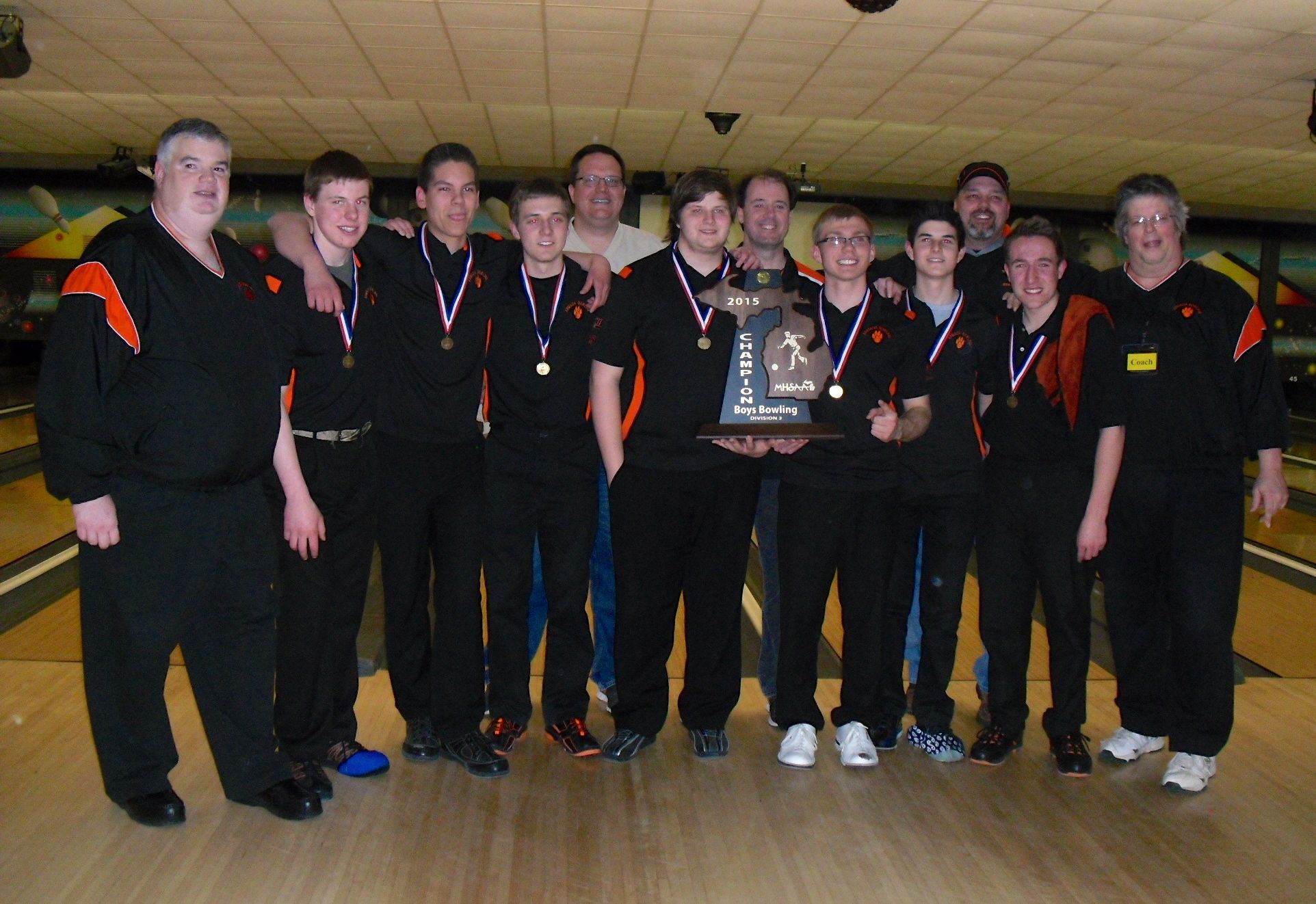 Armada, the Regional champion at Cherry Hill Lanes in Dearborn Heights, won its first Bowling Finals championship in school history and did it against a school with which it shares home lanes.

“We know them very well, so it was good to bowl them, and we knew before the last match that at least the state title was coming back to the conference.”

A 147 in the second Baker game left Armada 38 pins behind Richmond going into the final individual game.

“We were behind in the Baker, but we picked up some momentum late in the second game,” Armada coach James Carl said.

Armada was pretty steady in the final game, while Richmond was not able to keep its momentum from its scores of 178 and 198 in the two Baker games. Armada won the third game 867-794 to erase the 38-pin deficit and win the state championship.

Senior Zack Blackstock, who has been bowling since the second grade, led the way with a 198.

“The feeling is unreal,” he said. “We were down 38 pins, and my coach told me I just needed to cover my guy and every spare counted. I made everything I could. I ended with a 198 and threw it the best I could.

“I think the major turnaround was just keeping everyone together. We’re a good group of boys. When someone gets down, the others bring you up. You’re only as good as your weakest link.”

Seefried threw a 184 for Armada, followed by Kyle Gest (171), Nick Medley (161) and a combined 145 from Brandon Carrizales and Matt Hammer. Medley converted a tough 4-10 split late in the game that Seefried said “really changed things.”

Medley, a senior, said he was not concerned about the 38-pin deficit after the Baker games.

“Two Baker games don’t mean anything,” he said. “In the individuals you can shoot 1,000 pins, and in a Baker game you can only get 400. Anything can happen; you have five bowlers bowling 10 frames. They started off with some open frames, and that gave us a little motivation to get up and start throwing some strikes.