ALLEN PARK – Utica Eisenhower’s boys and Zeeland’s girls both went into the regular game portion of their Team Finals matches behind after the Baker round.

Both rallied and ended up claiming Division 1 championships Friday at Thunderbowl Lanes.

Eisenhower rallied from 34 pins down, taking advantage of splits by Salem in the 10th frame to win the crown by five pins, 1,454-1,449. Zeeland fell behind Jenison, the 2019 champion, but rallied in the regular games of the match to win 1,185-1,155 and claim its first Finals title.

“Just amazing,’’ said Zeeland coach Jeremey Baum. “We had shot an 1,119 early in the day, and the girls never gave up.”

“We fell behind, but we stayed positive,’’ senior Skylar Beverwyk added. “We knew we were going to get their best because they were the defending state champs.’’

Eagles senior Dylan Kelly struck out to finish with a 235 and secure his team’s title.

“Dylan has been there for us all year,’’ said Eisenhower coach John Snider. “He’s clutch for us. We got lucky. We had some things go our way in the 10th frame.

Said Kelly: “We kept our spirits up. It wasn’t over until it was over. It’s a special group. We bonded well. We pick each other up when we’re down.’’

Eisenhower fell behind after the first Baker game, losing 216-177, forcing the Eagles to play catchup. 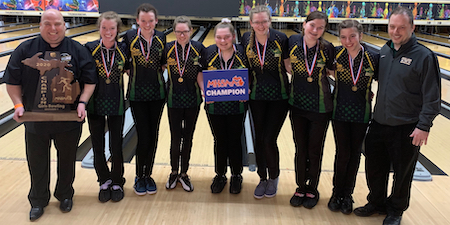 In the girls championship match, Jenison built a 63-pin lead after the first Baker game. Zeeland rallied in the second Baker game and headed into regular games trailing 355-325.

“It’s a grind, but the team kept its composure,’’ said Baum.

Dakota’s run was short-lived as it fell to the eighth-seeded and always tough Davison 1,427-1,359. It was the first time in 16 years Davison had beaten Dakota, head-to-head or in tournament play. Second-seeded Oxford also fell in the quarterfinals, losing to Farmington 1,337-1,313.

Davison advanced to face Salem, which beat Livonia Franklin, 1,475-1,392, while Farmington faced Eisenhower in the other semifinal after Eisenhower had disposed of Swartz Creek, 1,553-1,149.

Zeeland advanced to the championship match by defeating Lake Orion, 1,280-1,194, while the reigning champion was dispatching New Baltimore Anchor Bay, 1,201-1,061.

In the girls’ qualifying round Monroe and Lapeer tied for eighth (3,013), resulting in a roll-off to determine which would face top qualifier Lake Orion (3,344). Lapeer won the tie-breaker, then fell to the Dragons 1,151-1,098.

In its quarterfinal, Zeeland opened some eyes with two bowlers shooting 253 and another 255 to set a school record with an 1,119 pin fall in the regular games portion of its match against Rockford. Zeeland advanced to the semifinals with a 1,484-1,232 romp.

Jenison defeated Anchor Bay by 140 pins, while Zeeland reached the final with an 86-pin victory.