ALLEN PARK – Blake Ryntz had no clue that the tears he was shedding late Friday morning in his father’s arms would – five hours later – morph from ones of sadness to those of triumph.

But that’s what the sport of bowling can do to a person.

Ryntz, a senior on the Farmington-Harrison Unified bowling squad, thought his team had missed qualifying for Finals match play. But he and his teammates actually barely had made the cut and then proceeded to crush the competition, defeating Oxford in the championship match to claim the program’s first-ever MHSAA boys bowling championship.

“To me, it’s motivating. Barely making it in, you’ve got to show them who’s number one,” said Ryntz, who fired a 269 in his team’s final game against the Wildcats. “I went in thinking it was a fresh start. Everything that happened this morning, just forget about it. Inside me, I knew I could drop three really good games to help us get to the Finals.”

That he did, as sixth-seeded Farmington-Harrison cruised past Macomb L’Anse Creuse North in the quarterfinals and then Salem in the semifinals to set up the showdown with their rivals from the Oakland Activities Association. The team shot 1,463 and 1,435 in its first two wins before putting up 1,453 in defeating Oxford.

“It’s surreal,” said Farmington-Harrison head coach Dennis Hermani, whose team shot Baker games of 225 and 221 and a team score of 1,007 in the final. “These kids have bought into our mantra of “This isn’t bowling, it’s family.’ We had alumni from 10-12 years ago drive here today, took the afternoon off from work. JV kids, parents from years ago. They really bought in and support our program.”

Farmington-Harrison entered the tournament ranked No. 1 in the state, having posted the highest Regional score a week ago. The team struggled a bit in its Baker games and bowled sub-par in its two team games. But it snuck past Roseville, Oxford and Macomb Dakota – which narrowly missed qualifying by just five pins.

“I’m so proud of them. We barely made the cut today, by nine pins,” Hermani said. We did not bowl very well this morning, and they were feeling the pressure. All they kept saying (was) that they wanted to get in this (Stadium) room. Once they got in this room, they performed outstanding.”

Along with Ryntz, Evan Yards (202), Jonah Musial (184), Sean Ronald (183) and Christian Dorsey (169) also scored for the team in the final. Devon Osborn and Ryan Wrublewski were also a part of Hermani’s championship squad.

Justin Sisson (208) and Luke Acton (191) led the way for Oxford, a team with no seniors on its roster. Coach JR Lafnear was happy for Hermani and his team, but just as excited about his team’s future.

“I’ve got all juniors and sophomores here and they’re all coming back, so we couldn’t be happier,” said the coach, whose team made its first appearance in the championship match. “The boys battled hard all day. We won the OAA and set our sights in here on doing the best we could. And we were runner-up to an outstanding team from Harrison. I’m not disappointed at all.”

Oxford defeated top-seeded Westland John Glenn is its first match before knocking off Jackson in the semifinals. 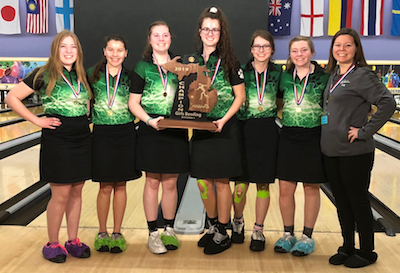 Across the alley, Jenison captured its first MHSAA girls bowling championship, knocking off two-time champion New Baltimore Anchor Bay 1,307-1,200 in the title match. The Wildcats were seeded fourth after qualifying and had to knock off top-seeded Taylor in the semifinals before bouncing the second-seeded Tars in the championship match.

“All season long, I’ve always asked the girls, ‘Just give me your best,’ and today they did that,” Jenison coach Kim Becker said. “They just pulled it out. Everything started falling our way; they pumped each other up. The momentum got going, and it just carried through.”

Jenison led Anchor Bay by 38 pins after two Baker games, but then things began to go against Becker’s team. The Wildcats had six open frames through their four turns in the regular game, and the Tars began clawing their way back into the match.

But then the “Bowling Gods,” as Becker put it, started looking down on her Jenison team. Her anchor bowler, Lauren Slagter, picked up an ugly split in the fifth frame and then used a little luck to strike in the seventh to help right the ship. Up to that point in the game, her team had picked her up. So she hoped that her stretch from the fifth through the eighth frames could do the same for her teammates.

“I was just trying to do my best to make up for what I did in that first half of the game,” Slagter said. “It ended up OK. I’m happy with the turnout.”

Alexis VanWayckhuyse led all bowlers with an individual game of 244, helping her team to a 941 team score. Anna Bartz had a 209, while Sarena Overbeek (182), Racquel Kranenberg (155) and Slagter (151) rounded out the Wildcats’ scoring.

Jenison, the fourth seed in the draw, defeated Rockford in the quarterfinals.

Anchor Bay, which previously had won Division 1 titles in 2007 and 2011, was seeded second in the draw and beat Sterling Heights Stevenson and Westland John Glenn on its way to the final. Kate Kaltz fired a 193 to lead her team against Jenison. Amanda Fsadni (189), Emily Fulgenti (182), Kaitlyn Cavender (168) and Merisa Batkins (140) also scored for their team.

“These girls bowled fantastic,” said Anchor Bay coach Buddy VanWieringen. “This is the best team I’ve had in quite a few years. I’ve had a lot of great coaching help this year. It’s been a fun season.”