LANSING – Kyle Tuttle felt the target on his back all weekend at Royal Scot Bowl, but it was the Xs he marked in the late frames Saturday afternoon that really hit the sweet spot.

The St. Charles sophomore became only the second bowler in MHSAA competition to win back-to-back singles championships by edging Bad Axe junior Ethan Sobczak by one pin, 379-378, in the Division 4 title match.

Tuttle trailed by 15 pins (175-160) after an uncharacteristically well-below-average first game, and then compounded matters by committing a line violation in the opening frame of game two.

“But that’s when he shows how mentally tough he is,” said St. Charles coach Mark Faupel. “Kyle is an extremely hard worker, he’s mature, meticulous and very precise. Anybody else might have packed it in at that point.”

Trailing by eight pins heading into the eighth frame, Tuttle reeled off four straight strikes (he left three pins standing on his last ball) to finish with a 219. He then had to sit and watch Sobczak take aim at the title.

“I thought he was going to double and win it,” Tuttle said.

Sobczak cleared he deck with his first throw in the 10th but left one standing on his second attempt. He cleaned up the spare, but it wasn’t enough to dethrone Tuttle.

“I had a terrible start, no doubt about it,” Tuttle said. “But thankfully I was able to pull it together when it counted.”

Tuttle, who carried a 210 average into the weekend, defeated Oscoda freshman Grant Huebel in the Semifinals, 433-402, and Dryden senior Patrick Kaliszewski in the Quarterfinals, 418-329.

Tuttle was seeded second to Bailey Budnick of Rogers City – the 2013 Finals champion – after the morning qualifiers.

“We talked before the second game, and I told him he needed to go get it,” Faupel said of Tuttle, whom he’s helped coach since the sixth grade. “(Sobczak) was not going to let it get away. Kyle had to go out and win it.”

The other two Quarterfinal qualifiers in the boys competition were Niles Brandywine senior Jakob Azilagyi and Hanover-Horton sophomore Zach White. 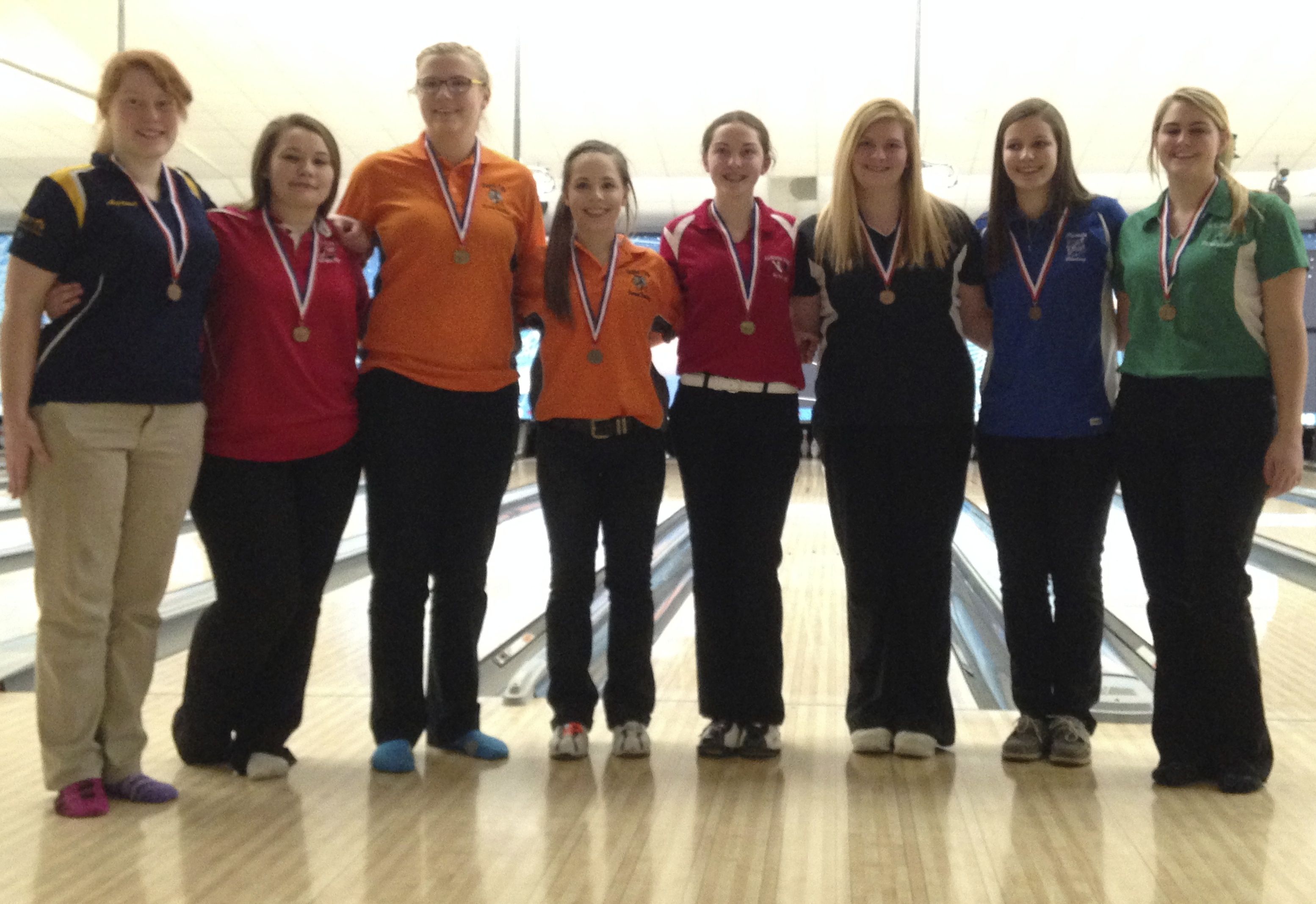 Hanover-Horton junior Emma Davis made it look easy in the Division 4 Girls Singles Finals, as she cruised home with four victories in bracket play by a combined pinfall of 469.

Davis, who came out of the qualifying round seeded second behind Ithaca senior Chelsea MacLennan, strung together two-game totals of 532, 408, 444 and 384, the last of which defeated runner-up Rebecca Bannasch of Rogers City by 43 pins.

“I really felt good all day and was able to put together some solid games at the right time,” said Davis.

Solid is an understatement. Davis rolled 245-287 to defeat St. Ignace senior Sharman Colegrove in the round of 16; 221-187 against New Lothrop junior Jenna Johnson in the Quarterfinals; identical 222s versus Oscoda senior Paige Huebel in the Semifinals; and 213-171 over Bannasch in the title match.

“Her consistency, from start to finish, was right where it needed to be,” said Hanover-Horton coach Rob Davis. “She had a couple of great games in the round of 16 and from there it was all Emma. She was focused and throwing the ball really well.”

Davis qualified for the round of 16 last year but did not advance further.

“I slowed things down a bit more this time, and it seemed to work well for me,” Davis said.

Bannasch reached the Final by defeating Mason County Central senior Lindsay Koch, 361-298, in the round of 16; Ithaca junior Arianna Woodrow, 346-267, in the Quarterfinals; and Portland St. Patrick senior Madison Schrauben, 332-324, in the Semifinals.