By Dick Hoekstra
Special for Second Half

LANSING – It took the third highest series of bracket play to do it, but Bronson sophomore Brandon Hyska eliminated three-time reigning champion Kyle Tuttle of St. Charles 482-456 in a Quarterfinal match and went on to capture the Division 4 individual championship in boys bowling Saturday at Royal Scot Lanes.

In the girls Final, senior Kendra Schuitema of Ravenna bowled strikes in frames 5-10 and an extra frame to pull away from senior Paige Kortz of Napoleon and also earn an individual title.

Hyska, the No. 2 seed after morning qualifying, rolled his best series of 487 in the first round of bracket play to set up the match with the No. 7-seeded Tuttle.

Tuttle was disappointed, especially after his St. Charles team lost by just 13 pins in a team Semifinal a day earlier.

Hyska then defeated No. 3-seeded sophomore Korey Reichard of Vandercook Lake 318-268 in a Semifinal and No. 1-seeded senior Chase Elkins of Grass Lake 453-377 in the Final.

“I got off to a good start, and had a 50-pin lead,” Hyska said. “So I had to stay clean, make strikes and spares, and throw good shots.”

Hyska felt he could be a contender after throwing the best score of 1206 of the six Division 4 regionals the previous weekend. He also had the experience of making the final 16 as a freshman a year ago before losing in his first match of bracket play.

“I knew I had a good chance to come out here, do what I can do, and shoot good scores,” Hyska said.

Schuitema, on the other hand, never expected her success. 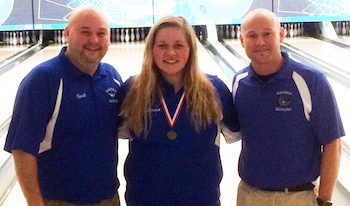 “I was a champion at Regionals last year, but I never thought I would be a state champion,” she said.

She placed fifth at her Regional this year and came into bracket play as the No. 7 seed after morning qualifying.

“Coaches just kept saying you can beat any girl here,” Schuitema said. “I didn’t believe it, but I did it. What a way to end up senior year.”

She defeated No. 10-seeded Melissa Steinbis of Bad Axe 369-313, and then No. 2-seeded Mackenzie Johnson of Vandercook Lake 419-402. Johnson’s series was the third best of the day, but Schuitema managed to throw her best series to beat her. Then she overcame a 10-pin deficit to edge Jennifer Stratton of Hudson by just eight pins at 360-352 in a Semifinal and recorded her second-best series of 410 to earn the title.

Schuitema started to believe she could win it all with the Semifinal victory. But it wasn’t until the sixth frame of her second game, which was the second of her seven straight strikes, that she felt she had it won.

“I was mainly focusing on not showing my emotions, and getting my spares, because the lanes are getting harder,” Kortz said. “I got a couple bad breaks that were mentally tough. At the end, she found out what line to shoot. I was still struggling to find the line.

“I wanted to leave it all on the table my senior year. I made it to state two previous times, but never made the cut.”

Elkins finished fourth in a Regional won by Hyska, but secured the No. 1 seed Saturday by 27 pins after morning qualifying. He defeated No. 16 seed Drake McFarland of St. Charles 482-318 with his best series of the day, and then won two super close matches. He edged No. 9 seed Cody Johnson of Sandusky (who was coming off a spectacular 526 series) 469-461 in a Quarterfinal and No. 5 seed Chase Castro of Beaverton 413-407 in a Semifinal to reach the Final.

“I actually missed more opens in those two games than I did all day,’ Elkins said of the Final. “I think the nerves got to me, and the adrenaline. But I’m happy with my performance today.”