Tubbs was a member of three of the championship teams, but also part of Davison’s loss in the Final a year ago to Macomb Dakota.

That loss gave Tubbs and the Cardinals drive to get back to the Finals this season.

"I think you always think about that loss in the back of your mind, but I really think it was a building block to this season," Tubbs said after the Cardinals defeated Farmington Hills 1,206-1,139 in the championship match this time.

"To be a part of three of these championships, especially winning one during your senior season, is pretty special. What a great way to end your high school career."

Kailee's dad Robert Tubbs with the help of many coaches, assistants and educators has helped build the Davison boys program into a state power since taking over the Cardinals 12 years ago.

He was choked up after watching his daughter throw her final shot as a high school bowler. However watching Kailee end her season with an MHSAA title was just icing on the cake.

“Her freshman year at the state finals, after two frames the coach said, ‘Get in there,’ and she hasn’t left the lineup,” said Tubbs, who watched his daughter shoot 184 in the regular game portion of the final.

With Kailee Tubbs the lone senior on the Cardinals squad, don't be surprised if Davison isn't back a year from now seeking to add to the run.

"It really comes down to our feeder programs," said Robert Tubbs. "We do such a great job developing our younger bowlers, and when they get to the high school level they know what to expect."

Davis’ 275 during qualifying helped her team secure the top seed in match play with a total of 3,406, nearly 150 pins better than second-seeded Farmington (3,258). 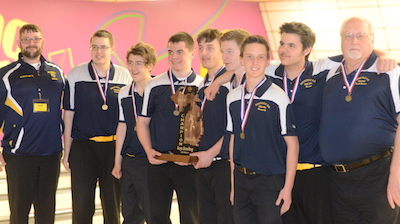 Davison advanced to the semifinal by beating Zeeland, 1,254-1,134, while St. Clair Shores Lakeview eliminated Howell, 1,235-1,213. Harrison moved on to the semifinals with a 1,308-1,114 win over Sterling Heights Stevenson and then defeated Brownstown-Woodhaven 1,178-1,172 to advance to the championship match.

While Davison’s girls have been dominant, Wyandotte Roosevelt’s boys captured their first MHSAA title under first-year coach Charlie Cassise with a 1,342-1,211 victory over Macomb L’Anse Creuse North. The winners built a 411-305 lead in the Baker portion and were led by Cory Coffey’s 214 in the regular game.

"The kids came into today knowing what to expect. They had a game plan and executed it," Cassise said. "I've been around this sport 50 years, and I can honestly say nothing feels better than watching these kids win a state championship."

Brent Calhoun added a 191 in the Final for the champions, while Jacob Schultz had 183, Gabe Cassise 179 and Devin Challfour 164.

Jacob Mackowiak led L’Anse Creuse North with 204 and was followed by Kevin Rhoney with 199.

Grand Haven’s Logan Batka had one of the highlights for the day on the boys side, rolling a 289 during qualifying to lead his team to a score of 1,131 pins – which bumped the Buccaneers up to sixth heading into match play. They ended up reaching the quarterfinals.