STERLING HEIGHTS – In a sport filled with so much unpredictably, the Davison girls bowling team continues to be a model of incredible consistency.

For a sixth straight year, Davison advanced to the championship round of the Division 1 tournament Friday. Once there, the Cardinals improved to 5-1 in those championship matches, earning a 1,368-1,189 win over Oxford at Sterling Lanes to repeat as champions and win their fifth title in six years.

The only blemish was a loss to Macomb Dakota in the 2015 championship match.

“The girls are all dedicated and they know when come into our program, they need to give it their all,” Davison coach Bryan Davis said. “We have a great youth program. You get a couple or three good bowlers every year; it feeds into itself.”

In the boys event, Salem won its second MHSAA title with a 1,285-1,232 win in the championship match over a Hudsonville team that also was seeking the program’s second title.

“They were strong all season,” Salem coach Kathie Hahn said of her team. “I have four seniors so I was hoping for a good ending to their year. I was a little nervous and then as the (Final) came on, I was more nervous because if they started stringing (strikes), it could’ve been hard. We weren’t really stringing strikes today. But they held in there, they never gave up and were tough all the way. I can’t be more proud of them.”

The Davison girls dominated the entire day, finishing first out of the qualifying block with 3,572 pins and then starting its run to the Final with a 1,237-1,104 victory over Utica in the Quarterfinals.

The Cardinals then knocked off Rockford in the Semifinals by a score of 1,272-1,039.

Oxford finished third out of the qualifying block with 3,079 pins, and started a run to its first-ever Final with a 1,177-1,053 victory over St. Clair Shores Lakeview in the Quarterfinals. 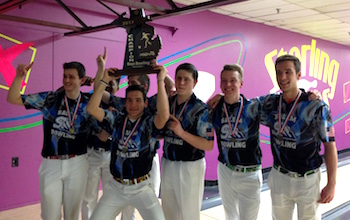 Facing a Macomb Dakota team that knocked off No. 2-seeded Lake Orion in the Quarterfinals, Oxford earned a crack at Davison with a 1,230-1,169 win over Dakota.

Oxford head coach JR Lafnear knew the force his team was up against in Davison, and could only admire the brilliance of the Cardinals in the Final.

“That’s a juggernaut,” Lafnear said. “They are tough to beat, and we would’ve had to have been at the top of our game. We are happy with our performance. Of 100 teams in Division 1, 98 would rather be where we are. We are pretty pumped up about it. I’ve got two sophomores and a junior coming back out of this group, so we are excited about the future.”

Like the Oxford girls, the Salem boys finished third out of the qualifying block and began the elimination round with a 1,293-1,132 win over St. Clair Shores Lakeview in the Quarterfinals.

Hudsonville had all sorts of momentum going into the Final after knocking off the reigning Division 1 champion and No. 1 seed out of the qualifying block Wyandotte Roosevelt in the Semifinals by a score of 1,366-1,227.

But Salem was too much for Hudsonville to overcome.

“The boys showed up today,” Hudsonville coach Paul Bentley said. “They bowled good all day. We just ran into a good team in Salem. They bowled well that match.”