Bowling coaches in Macomb County point to a number of factors to explain why high school programs in their county have been and remain so highly competitive.

One is tradition – and another is the automotive industry.

Greg Villasurda is in his sixth season coaching the girls program at St. Clair Shores Lake Shore, and he’s worked for Chrysler Corporation for the past 25 years. A graduate of Clinton Township Clintondale, Villasurda has been a bowler since his youth – and he said where he grew up, there were bowling establishments seemingly on every corner.

“I could walk to my bowling alley,” he said. “There were so many good bowlers back then. When I grew up, we didn’t have competitive bowling. We bowled for recreation. Back then all the dads worked for the Big 3, and they all bowled. That’s what you did.”

The numbers tell the tale of how that bowling way of life has cultivated success at the local high school level.

It should be noted that teams in other areas, like Genesee, Oakland and Wayne counties, also have excelled in high school bowling over the last 15 seasons. But since 2005, teams from Macomb County have won nine MHSAA Division 1 Finals titles (five boys, four girls) and finished second seven times (four for the boys, three for the girls).

Bowling is a sport the entire family can enjoy together and, in an odd way, this is how Villasurda became involved with coaching. His daughter Taylor was a freshman at Lake Shore in 2013 when she tried out for volleyball but was cut.

“She was really upset she didn’t make (the volleyball team),” Villasurda said. “She came home and said one of her friends was on the bowling team and (that) she wanted to bowl. I said, ‘What?’ She said yes and I said, well, let’s go. I bought her a ball, but it was just two weeks before tryouts. So we bowled every day to get her ready. She goes to try out and bowls a 216 and beat everybody. That opened up the floodgates.”

Taylor graduated from Lake Shore in 2017 and attends Siena Heights, where she competes on the bowling team.

Last season, Villasurda had one of the state’s top bowlers and a title-contending team. Led by then-junior Dani Decruydt – the 2019 Division 1 singles runner-up – Lake Shore qualified for the Division 1 Team Final by placing third at its Regional, and the Shorians finished a respectable eighth at the championship tournament. Lake Shore was also co-champ (with Macomb Dakota) in the Macomb Area Conference Red. Lake Shore, the smallest school by enrollment in the Red, had won the division title outright in 2019 and was second in 2018, Decruydt’s freshman year.

Lake Shore is a good example of the overall strength of the programs Macomb County. A member of the MAC Gold in 2016, Lake Shore moved to the Red where perennially strong programs like Dakota and L’Anse Creuse North compete. The Shorians took their lumps that first season within the division, but has competed well since. With all but one starter returning this season, Lake Shore is expected to be in the mix again. 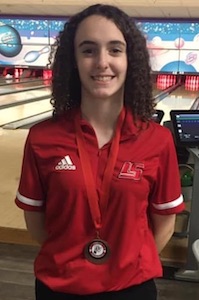 Utica Eisenhower’s boys won their program’s first MHSAA Finals championship last season, as the Eagles came from behind in the final few frames to defeat Salem by five pins in the Division 1 championship match.

Eisenhower was a member of the MAC White last season and entered the MHSAA tournament ranked No. 1. Coach John Snider is in his seventh season this winter, and his experienced team is competing now in the MAC Red.

“The competition is extremely strong in the county,” Snider said. “The people I worked with in the MAC, the guys are so dedicated, so knowledgeable about the sport. They are good, solid, caring people. There are a lot of people committed to making this sport a success.”

Eisenhower’s top bowler is Carter Milasinovich, one of five juniors returning. Milasinovich averaged in the mid-220s the past two seasons and is backed by fellow juniors Nolan Horne and Jacob Matheson, whose mother Lisa Matheson coaches the girls varsity team.

The bowling community is a tightly-knit group. Proprietors, according to Snider, have bent over backward in their attempts to serve the public at large and the students competing in the sport. Snider said practices have been all but eliminated because of COVID-19 restrictions on the hours bowling centers can be open and how many people proprietors can accommodate.

“I’m real proud of the organization and the people behind us,” Snider said. “It’s a labor of love for all of us.”

Snider has bowled nearly his entire life and, like many, got his start through his parents who also bowled. One reason he got into coaching was the opportunity he had to coach his son during his senior year.

Eisenhower had its share of success before last season, as the Eagles had won the MAC White three of the last four seasons. But 2020 was magical. Eisenhower won six tournaments before going to the Finals. The Eagles trailed Salem until the final frame before pulling out the title-clinching victory.

“We were down like 70 to 80 pins in the seventh,” Snider said. “We talked all year about being gentlemen and not giving up, and I was thinking about the speech I was going to give them after we lost. I’m glad I didn’t have to give it.”

Eisenhower opened this season Jan. 30 with a strong victory (18-12) over Sterling Heights Stevenson. Those two teams plus Dakota are expected to challenge for the division title.

Dakota was a Regional champion last season and the top seed going into the Finals Round of 16, but was defeated by Davison in the first match.

“It happens,” Dakota coach Jason Kavanagh said of the loss to Davison. “We had a great year. Heck, we had a Baker game of 300, and I’ve only seen that one other time in my five years of coaching.”

Dakota always seems to be in the mix when it comes to deciding the Division 1 champion, and with five seniors returning, including Gregory Guzik, this season should be no different. The school will sponsor three junior varsity teams, one more than last year.

Kavanagh points to the tradition at the school and in the community, as well as the sport being passed on from generation to generation as keys to bowling being so popular and thus, competitive, in the county.

“A lot of it has to do with their parents who are good bowlers,” he said. “And they’re having the kids come here and compete carrying on what they’ve done.

This bowling fever is not limited to the Red or the White divisions, nor is it just in the northern part of the county. Craig Geml is in his eighth season at Warren Woods Tower, a member of the MAC Gold. The last seven he’s coached both the boys and girls programs. Noah Tafanelli, a senior this season, won the MHSAA Division 2 individual title last season. Tafanelli’s sister, Kayla, was a freshman last season and advanced to the Division 2 singles semifinals.

Geml contends that much of the success programs like his and many in the county have achieved got its start on Detroit’s eastside. Geml grew up in the 7 Mile Road and Kelly Road area in Detroit, and attended Harper Woods Notre Dame, a school that bordered Detroit’s city limits. Geml won a number of amateur bowling tournaments before competing in the sport while attending Wayne State University.

“Bowling was a working-man’s game, a middle class sport, back then,” Geml said. “It’s what you did. I bowled at two different lanes back then in Detroit, and that’s what your friends did. It’s a family-oriented sport. It’s almost hereditary. It’s grown into your physique.”

As time progressed and families moved further north into Macomb County, they took the sport with them and introduced it to their children.

Geml’s teams have won eight MAC Gold titles (boys and girls combined) and he’s proud of the success they’ve earned. Both squads have four starters returning this winter. And although neither team reached the MHSAA Finals a year ago, Geml did have six of his bowlers (out of 10) qualify as individuals.