By Sarah Jaeger
Special to Second Half

WATERFORD – What a difference a year makes.

After the 2013 Division 2 Singles Finals, Alex Ouellette from Bay City John Glenn left Century Lanes after coming in second place, vowing to return and win it all.

Fast forward to Saturday, and Ouellette is the 2014 boys champion.

"I knew if I stayed slow and made good shots, I could beat anyone and that's all I had to do," Ouellette said.

The senior cruised through the morning block, even shooting a 300 in the fourth game, and qualified first with a score of 1,463.

"I kind of didn't realize I had the front 8 because I was focused on being consistent and making good shots," Ouellette said. "Then it just came down to the 10th frame, and it was just three more strikes."

"He never really struggled throughout the day," Bay City John Glenn coach Craig Block said. "After those first couple matches when we got up there and shot the 300, I'm sure he felt on top of the world because I did."

In the first round of match play, Ouellette edged junior Anthony Kelley of Flint Kearsley by just five pins. But it was smooth sailing as Ouellette then went on to beat sophomore Chad Stephen of Kearsley in the Quarterfinal and junior Cody Wilkins in the Semifinal.

However, Warren Fitzgerald senior Alec Nunn was waiting for him in the Final to settle a score from 2013.

"He beat me out last year, and I wanted to get another chance at him again," said Nunn of his loss to Ouellette in the previous year's Round of 16. "Runner-up doesn't feel too bad, but I wanted another shot at him."

While each bowler has his unique style and form, Nunn has an uncommon approach, throwing right-handed and sliding on his right foot.

"I asked him when he first started, ‘Do you want to change?’" Warren Fitzgerald coach Rick Schultz said. "He said no, so we just worked with what he had and everything has worked out fine for Alec."

Ouellette got out to an early lead with a 248 to Nunn's 177 in the first game. Even though the second game margin was only two pins, Ouellette had too big of a lead and won his school's second singles title with a match score of 479-410.

While both boys finalists were looking for redemptions on the lanes this year, they were not the only ones.

Tecumseh senior Lauren McKowen missed making it into last year's Finals by one pin and had to watch as teammate Jordan Richard won her second straight singles championship. 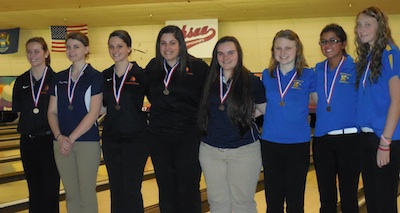 But instead of setting her sites on the top prize like Ouellette, McKowen decided to take it one step at a time.

"I just wanted to take it day by day, senior year try and make it your best and that's what happened,” McKowen said.

She placed fourth in the Saturday morning qualifying block and proceeded to beat senior Alysha Sobeck of Gaylord and senior Katelynn Maxwell of Flint Kearsley in the bracket.

McKowen had to beat Richard in the semi to get in the Final. After the first of two games, only two pins separated the teammates. But in the end, McKowen was able to pull out the win 481-431.

"I am the one coach that's not shy about saying I hate singles, and it's for that reason," said Ken Richard, one of Tecumseh's coaches and Jordan's father. "It's tougher for me than most coaches because one was my daughter. But you know the girls have grown up together inside a bowling alley. This wasn't their first head-to-head match, and Lauren came out on top."

With McKowen hoping to become the fourth individual singles champion for the girls in school history, she still had to face Samantha Knight, a senior from Richland Gull Lake, a team in only its fourth year having a bowling program.

"I never really thought when I started my freshman year with our small teams that four years later I'd be here," Knight said.

Knight qualified in the 11th position from the morning but wasn't going to let one bad game get her down.

"She bowled a 133, which just plummeted her scores down," said her coach and mother, Hilary Knight. "But she found her ball, found her line and just kept on going. I know that can really throw you one way or the other, but she managed to rebound."

"Fighting in a lower seed is kind of fun," Samantha Knight added. "You're kind of an underdog."