STERLING HEIGHTS – For one champion, it was that same old story. And for the other, it was a long time coming.

The MHSAA Division 1 Bowling Team Finals saw Davison High’s girls three-peat, and the boys from Detroit U-D Jesuit begin what they hope will be a similar streak in claiming their respective trophies Friday at Sunnybrook Lanes.

On the girls side, Westland John Glenn gave the two-time reigning champion Cardinals all they could handle in the Final. Davison eventually won 1,509-1,447.

Cardinals coach Tracy Greene said the squad bowled “a lot of tournaments all year to get them prepared for the pressure of head-to-head competition. … It all paid off.

“We lost three seniors from last year, but we had two great freshmen. To come back and do a three-peat was awesome. Unbelievable. The girls bowled so good, I’m proud of them.”

Greene, the team’s anchor bowler, said the squad felt plenty of pressure to repeat once again as they entered the Finals with a target on their backs and a drive to win again.

“There was pressure, but we pulled through,” she said.

Myranda Livingston, Davison’s lone senior, subbed in for Greene for the final frame of the championship match, sealing the win with a few emotional throws.

“It was like the best feeling in the world, and the worst feeling, because it was my last ball I’ll ever throw for high school,” Livingston said.

The senior said watching her teammates bowl in the close Final was “very nerve-wracking,” but she did what she could to keep them calm and focused.

“I keep the girls motivated,” she said. “I do whatever I can to keep them pumped up. I think these girls are very talented, and honestly, next year I think they can come back and win it, because I’m the only one that’s leaving. So they’re basically going to be the same team.”

“I definitely think we have a great chance of winning next year as well,” she said.

Westland John Glenn’s Emily Dietz nearly bowled a perfect game in the Final, throwing nine straight strikes before leaving two pins standing in the 10th frame to finish with a 277.

Davison was led by Taylor Davis’ 247 in the Final.

In the boys competition, meanwhile, the chants of “Shave the beard!” began as soon as U-D Jesuit wrapped up its 1,409-1,360 win against Grand Haven. 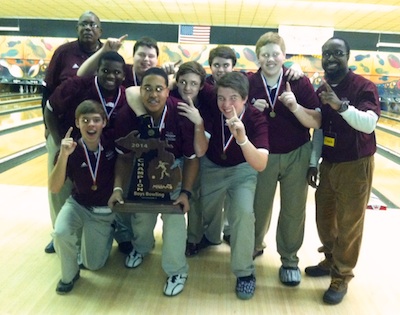 Cubs coach Darrin Flowers had promised his team he would shave the long beard he’d been growing for a year-and-a-half if they won the title. So out came the razor as the team celebrated.

“I said, ‘If you win states, I’ll shave it off on the lanes,’” Flowers said. “So I started with a beard this morning, now it’s gone.”

But he, and the rest of the team, gladly traded it for the championship trophy, as the Cubs have been razor-close all season to winning one, but fell just shy taking second place recently in the Catholic League finals and MHSAA Regional.

“We’ve come in second in a lot of past tournaments, and we’ve been really disappointed,” Jesuit junior Ben Szmatula said. “Just being here, holding up the trophy, it’s just amazing. Just knowing we’re the best in the state shocks me.

Despite the earlier tournament disappointments, Szmatula said the Cubs had a “fire” inside them to keep going.

“We’ve always had a sense of confidence that I don’t think any other team has had,” he said. “It was something that we’ve always wanted a lot. We were so close all those times, it took a while to get there, but we got there.”

Cubs senior Lloyd Lyons was somewhat at a loss for words when describing his feelings after four years of striving for this moment.

“I can’t believe it,” he said. “It’s indescribable right now. It’s something that we’ve been wanting to do the past four years. To finally accomplish it, there’s no explaining it. To get here and obtain it is amazing. It’s something we can always look back upon.”

While his beard had been around for a while, Flowers’ tenure with the program is longer. He bowled for the school, graduating in 2001. He’s been coaching Jesuit for four years – the whole time aiming to take the Cubs to the top.

“I started with our senior Lloyd Lyons, and I promised him that I’d get him there,” Flowers said. “So it’s more than just a championship for these guys. It’s priceless.

“I am beyond proud of these guys. Just to see how hard these kids have worked to get here is amazing to me. As a coach, what more can you ask for? Hard work, dedication. These kids grinded it out today. Execution got us here. And execution brought us that trophy. These guys took it to the next level.”

And while it’s been a long time coming, the Cubs were hoping to take a page out of Davison’s book and keep the championships coming.

“I know this will not be our last time here,” Flowers said.

Keith Reid led Jesuit with a 247 in the Final. Justin White bowled a team-high 229 for runner-up Grand Haven.