But twice on the same day?

That is what will forever make the 2018 Division 1 Finals at Sterling Lanes so unforgettable.

The Oxford girls and Waterford Kettering boys teams both rejoiced in winning their first titles in school history, as both pulled out their matches in the final frame.

Oxford’s girls team outlasted Macomb Dakota, which entered the regular game of the championship match trailing by 26 pins. Dakota rallied and actually was leading in total pins going into the last two bowlers before Oxford’s duo of juniors Megan Armbruster and Claire Sandstrom made sure the reigning runner-up Wildcats wouldn’t lose in the Final two years in a row.

Armbruster bowled two strikes and finished with 27 pins in her 10th frame to set up the last between Sandstrom and Dakota anchor bowler Danielle McBride.

Unfortunately for Dakota, McBride had an unlucky split on her first ball of the 10th frame, leaving three pins and only being able to pick up two of them.

With the door open, Sandstrom bowled a strike and then added nine more pins in her 10th frame to finish off the title for Oxford.

“A weight was lifted off of my shoulders,” Sandstrom said of when she saw McBride’s ball end with a split. “But I had to stay focused on what I was doing and make my shot.”

For Oxford coach JR Lafnear, it was the end of a 13-year quest for a Finals title, one that nearly resulted in a championship last year before the Wildcats fell to powerhouse Davison in the title match.

“That is what propelled them to work so hard over the summer in practice,” Lafnear said. “Shooting spares and corner pins and doing all that stuff. They were here and got a taste of all the excitement. They really wanted to get it done this year.”

Dakota was seeking its second Division 1 title after winning in 2015.

“They battled through a lot of adversity today and could have gotten knocked out several times,” Dakota coach Kevin Wemyss said. “They showed their character today.”

Davison held an 11-pin lead over Kettering after the two Baker games, and the match stayed close until the final frame of the regular game. 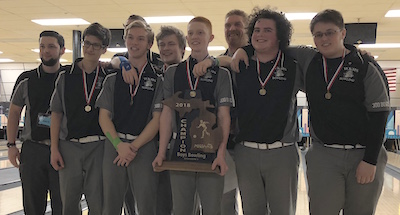 The last bowler of the match was Kettering junior Hunter Gates, who stepped up needing 14 pins to give his team the title.

Gates firmly got a strike on the first roll to send the Kettering team jumping for joy, and then the celebration officially began on the next ball when Gates knocked down seven pins.

When he did so, he quickly put his hands over his face and wept tears of joy as he was mobbed by teammates.

“I was just trying to stay cool, calm and collected,” Gates said. “Bowl like I know how I do. My teammates had all the faith in the world in me.”

Kettering head coach JR Olerich said he wasn’t sure if Gates knew he needed only four pins on what turned out to be his final ball.

“If he did, it probably would have been a little bit tougher,” Olerich said. “We all knew.”

Kettering achieved a rarity in that it went wire-to-wire for the title.

Davison was trying to carry the torch at the Finals for the powerhouse girls program, which failed to qualify for the tournament after winning it five of the previous six years.

This was the first time the boys team advanced to the championship match.

“We graduated four starters from last year, so we were really looking at this as a rebuilding year,” Davison coach Robert Tubbs said. “But we went into Regionals and we won the Regional, and we came in here and qualified second. We looked at it as house money. It’s hard for those guys to take it on the chin and say you were four pins from a state championship. These guys, they are not my best average team in my 14 years, but they got more heart, more grit and more determination than any other team I have coached.”

The Oxford girls finished second out of the qualifying block and then earned wins over Saginaw Heritage (1,223-1,207) in the quarterfinals and Holt (1,193-1,152) in the semifinals.