BATTLE CREEK — The Battle Creek Pennfield bowling teams are building impressive resumes again this winter after finishing the 2016-17 season on a historical note.

The Panthers capped last season by claiming both the Division 3 girls and boys singles championships – becoming the first program in MHSAA history to sweep the Singles Finals – and a day after Pennfield’s boys won the Division 3 team title.

The success has continued into a new campaign. Last weekend, the girls and boys teams won the Battle Creek All-City tournament, the girls’ ninth consecutive title and the boys’ seventh. Both teams are 2-0 in dual matches with Interstate 8 Athletic Conference play beginning in January. And the boys earned the 100th win in school history two weeks ago against Sturgis – joining the girls, who reached the century mark last season.

Both James Ruoff and Haley Hooper are back this season after claiming those individual Finals championships in March. Both teams also are building for title attempts, although admittedly that path should be more treacherous this winter – Pennfield moved into Division 2, where it is one of the smallest schools.

The Panthers’ boys slowly worked their way up to last season’s team title, finishing third at the Finals in 2015 and second in 2016.

“The first year I coached we were 0-11 and the boys never jelled,” Hinds said. “They never came together as a team, so I started preaching team unity and relying on each other. It’s not an individual sport.

“They came together at the end (of the 2016 season) and we ended up in third place. The second year after that, they jelled and we were .500. We ran into some stiff competition – let me tell you. They made a run to second.

“Last year, we won it all. It was a great feeling to win it all.”

Ruoff, a junior who has been bowling since he was 2 years old, threw a 300 last year and amassed an 800 series this year, both in youth leagues.

“Lindy Burton, owner of M-66, got me started,” he said. “My entire family bowled out here. 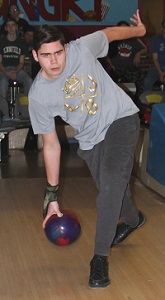 “Once I turned 4 she got me my first ball, and that’s when I really got into the youth leagues.”

“He was the young one, just a sophomore (last year), but he does a lot of extracurricular bowling,” the coach said. “He’s the one who has it in his heart; the burning, the yearning.

“The other guys bowl and like it but have other sports or interests. But when they came together as a team, they won it all.”

“I went to a few matches and Coach Roach talked to me when I was younger,” he said. “We’d been to some matches with my parents, and we saw how everything went,

“I like to bowl, a lot. As soon as I saw the competition, I was excited.”

“Not (good) so much for the bowling because this house plays really tough, but having all my bowling family behind me made a big difference,” said Ruoff, who was the 15th seed and upset second seed Adrian Hall of Corunna, 416-313, in the first round.

That was a reverse deja vu.

“The year before, I was the third seed bowling against the 14th seed, and I got knocked out first round so I had the confidence that I could do it,” Ruoff added.

Ruoff, who lugs six 15-pound balls “with different cores, different drillings, different layouts” to each competition, also sparked the Panthers’ 1312-1129 win over Corunna for the team title the day before.

In his fourth season of varsity bowling, senior Sean Young also has been with Pennfield’s program since the rise began.

“That was all the tension buildup for us,” he said of the title run. “We were tired of losing.

“Our coach helped us with that. He’s a big mentor for us. When we’re down, he tells us how to get back up.”

Seeded 16th individually, Young lost to top seed Gage Nickelson from Wyoming Kelloggsville, 452-410, in the first round of singles but, “I ended up ninth in state because my series were so high first round.”

A key to a repeat team title is spares, he said.

“That was our biggest thing last year. We really, really improved on our spares,” he added. “If we repeat, we’ll be first team in the state to move up a division and repeat, so that’s our goal.”

Hooper’s road to the title was similar to Ruoff’s path.

In the championship match she defeated Hannah Bergsma of Grand Rapids South Christian, 399-325. 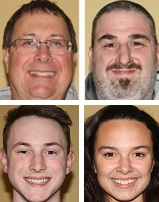 Hooper is not one to bask in her success.

“I never felt like I had it won until the end of my final match,” she said. “It was mixed feelings. I was on cloud nine, but the other girl was really upset and I know she could have beat me on any given day.

“Winning state was definitely a great experience, but I also know that a lot of those girls could beat me on any day. I had a good day.”

Hooper’s success is fueled by her ability to pick up spares, Roach said.

“She hits her target every time and if she doesn’t get a strike, she picks up her spares,” the coach said.

“She’s an outstanding spare shooter. She’s the most consistent.”

This season’s Division 2 tournament is at Super Bowl in Canton (M-66 also will again host Finals, but in Division 4.). And the Pennfield girls are of course motivated to make it a two-day event.

Bowling in the team competition the day before singles is a big help, Hooper said.

“It helped warm me up and get used to the lanes, but (it was tough) because it was so disappointing from losing the day before and then coming back the next day,” she said.

After the girls team won Regionals last year, it narrowly fell to Caro 1122-1120 at the Finals in the first round of match play.

Hooper said last year the team did not really bond, but this year the girls know what is important to advance.

“Staying focused in practice and really being a team,” she said. “It’s more team bonding and coming together as a family.”