One day earlier, Ploof was part of her third team championship. As dominant as Kearsley's girls have been in recent years, they've never had a team championship and individual winner in the same year.

"This weekend is perfect," Ploof said.

Ploof is coached by her parents, Robert and Pam, who have guided the Hornets to four team titles in the last five years. One year before that streak began, Lindsay Ploof was the individual champion in 2011.

"Lindsay's a big influence on her," said Robert Ploof, the team's head coach. "She's here rooting her on today. It's been awesome. Hannah is just a good kid. She's been a team captain every year. She's president of the National Honor Society. I can't believe she's mine. I give all the credit to her mom; mom definitely did it."

Hannah advanced through the qualifying round at the MHSAA Finals all four years, but didn't reach the championship match until Saturday. She lost 393-342 to Madchen Breen of Warren Regina in the round of 16 last year after coming in as the No. 5 seed. She made the Semifinals in 2014, only to lose 378-322 to Samantha Knight of Richland Gull Lake. As a freshman, she lost 411-371 to Mikki Mathews of Jackson Northwest in the round of 16. 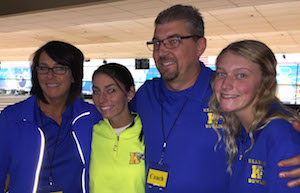 "It was definitely not an easy thing to do," Ploof said. "I've been working for four years for this, so it paid off. We try to bowl a lot of tournaments. As you saw, our team is pretty successful. Being in these types of situations, I'm used to it now."

Ploof dominated during her six qualifying games, averaging 218 to take the top seed by 146 pins over Breen. Urben was the third seed, 153 pins behind Ploof, reaching the Final with a 389-302 victory over Breen.

The degree of difficulty increased for Ploof after qualifying, however. She trailed Makayla Lancioni of South Lyon East, 198-159, after one game in the Round of 16. Ploof responded with a 224 in the second game to win, 383-353.

After a 420-323 victory over Jamie Bleiler of Jackson in the Quarterfinals, Ploof escaped with a 401-384 victory over Kayla Wild of Tecumseh in the Semifinals.

"In the Semifinals, she had a strike to win and she put it there," Ploof said. "There's nothing you can do about that. It's up to whatever. She left a 10 pin. It should not have stood. She should have won that one. I think everybody has those."

Ploof went up against a bowler with MHSAA championship experience, but in another sport. Urben was a .418 hitter as a freshman on Wayland's Division 2 championship softball team last spring. In bowling, she was 22nd in qualifying at the MHSAA Tournament last year, 35 pins out of the 16th and final qualifying berth.

"I'm just really surprised I made it this far, because there are so many good bowlers here," Urben said. "It's a really good experience to have going into the future. I learned adjustments. I learned how to stay consistent. I'll just practice harder next year and hopefully get back to the same spot where I was, and hopefully win it."

In the boys tournament, Sturgis junior Austin Robison won the championship with a 427-399 victory over Melvindale sophomore Marcus McClain in the Final.

Both bowlers made it to the Final despite no experience in the MHSAA individual tournament. Robison didn't advance through Regionals last year, while Melvindale didn't even have a team last season. 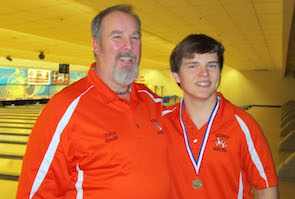 "I cut myself short in Regionals, which actually fueled my fire and made me want to come back and bowl my own game," Robison said. "I was in the cut most of the day, then I just threw myself out of it, throwing bad games. Every year I improve. After last year, it hurt me. I had to better myself and come back stronger than ever."

Robison eliminated Millard in the Semifinals, 412-373. Robison's closest matches were his first two, as he beat Byron Center junior David Northouse, 383-364, before winning 394-373 over New Boston Huron senior Cody Farr in the Quarterfinals.

"Usually pressure like that doesn't get to me," Robison said. "It somewhat did, because it's the state championships. I bowl better under pressure than just regular bowling."

"The only thing the pressure does is makes him focus on what he's doing," Smith said. "Instead of just going out there and winging it, he knows every shot is going to count. He's a lot more coachable in a situation with pressure than he is when we're just shooting team games, because he thinks he can get away with his carry. When it comes down to every shot's going to matter, it helps him focus."

McClain came out of qualifying in sixth place with a score of 1,255, a 209 average. He knocked off defending champion Chad Stephen of Kearsley in the Semifinals, 397-325. In his other matches, McClain won 448-387 over Sparta senior Derek Austin in the Round of 16 and 433-331 over Coldwater senior Shawn Johnson in the Quarterfinals.

Robison had a 226-208 lead over McClain after the first game of the final match. Robison closed it out with a 201-191 advantage in the final game.

"This is the first year our school had a high school team," McClain said. "We just talked to the A.D. Last year I bowled in tournaments, anything I could bowl, and practiced."