When thunder was heard with the runners about to head down the stretch in the MHSAA Division 2 boys cross country race, the leaders were oblivious to the ominous conditions.

“I was too focused on where I was and where I wanted to start picking it up,” Coldwater senior Shuaib Aljabaly said.

Aljabaly ran the fastest time of the day in any division, winning Division 2 with a time of 15:12.2. Nick Foster of Ann Arbor Pioneer won Division 1 in 15:16.1.

Otsego junior Alex Comerford was second in Division 2 in 15:24.7.

“I didn’t see (lightning) at the end,” Comerford said. “I definitely could tell it was going to come on. I don’t think anybody really noticed in the last half mile.”

Runners were urged to move quickly through the chutes following the Division 2 race. Two separate lightning sightings resulted in the final race of the day, the boys Division 1 race, to be delayed by an hour and 10 minutes.

The victory capped an undefeated season for Aljabaly, who won 12 races.

“My first year here was my sophomore year,” he said. “I surprised myself; I was eighth. Coming back, I knew there were a couple kids who were just super good. I just tried reaching for them; I ended up placing third. Both of them were seniors. I was like, ‘This is my year; let’s take it.’” 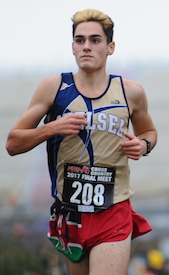 Aljabaly is the first Coldwater athlete to win an MHSAA boys title since Russ Hickey in 1991.

The key move was made on a downhill right after the two-mile mark.

“I’ve been training to get him in the last half mile,” Comerford said. “I just couldn’t do it. He’s such a good competitor. I run with him all the time. He’s the best guy you could possibly lose to.”

Chelsea, which has qualified for 16 straight MHSAA Finals, won its first championship by a 96-110 margin over defending champion Corunna.

Chelsea’s best finish before Saturday was fourth place in 2008.

Corunna, led by third-place overall finisher Ben Jacobs (15:35.9), had four runners in the top 21 of the team race, but also counted a 52nd-place finish.