BROOKLYN – It’s been 26 years since a ninth-grader from a high school in the northwest portion of Michigan’s Lower Peninsula made MHSAA cross country history.

Ryan Shay of Central Lake won the 1993 individual race at the Class D championships back when there were separate races for team and individual qualifiers. No freshman boy came close to duplicating Shay’s feat in the quarter century that followed.

But along came Hunter Jones.

Jones joined Shay as the only freshman boys to win a race at an MHSAA Lower Peninsula Final when he ran away with the Division 3 title in 15:45.0 on Saturday at Michigan International Speedway.

Since the Final was moved to MIS in 1996, the best finishes by freshman boys before Saturday were fifth-place showings by Rockford legend Dathan Ritzenhein in Class A in 1997 and Whitmore Lake’s Zach Carpenter in Division 4 in 2006.

Jones, whose school is 70 miles away from Central Lake, was aware of Shay’s running legacy. Shay went on to win the NCAA 10,000-meter championship for Notre Dame in 2001 and claim five national road race titles. He died while racing in the U.S. Olympic marathon trials in New York on Nov. 3, 2007. 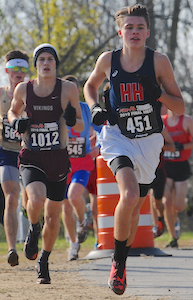 That would be pretty awesome to be as good as him,” Jones said.

Someday, a young runner may say the same about Jones.

He won 12 of his 13 races this season, taking fourth at the Benzie Central Pete Moss Invite on Aug. 24 behind runners from Division 1 and 2 schools.

His time Saturday ranks second at MIS for a freshman in any division, trailing only a 15:40.9 by Rockford’s Cole Johnson in Division 1 in 2014. Jones broke the Division 3 freshman mark of 16:03.8 set by eventual three-time champion Yami Albrecht of Caro.

Jones ran solo from the outset, winning by 28.9 seconds over Vandercook Lake senior Andrew Frohm. Frohm emerged from a tight battle for second place in 16:13.9. There were only 4.3 seconds between the second and fifth finishers.

“He pulled away,” Frohm said of Jones. “I was more looking at the guys who were second, third. The last 100 meters, I outsprinted the guy that was in second.”