Bill Huddleston’s impressive cross country achievements at Benzie Central during the mid-1980s could soon be matched or surpassed by his 17-year-old son Brayden.

Bill was a four-time all-stater, ran on three MHSAA title teams, and posted a personal-best time of 15:32, which ranks fourth on the school's all-time career list.

Fast forward 30 years, and Brayden, already a two-time all-stater, is hovering over those marks.

On Saturday, Brayden and his Benzie Central teammates will seek a third consecutive MHSAA Lower Peninsula Division 3 championship at Michigan International Speedway. The Huskies, who have won eight boys titles, captured three in a row once before – from 1984-86 when Bill was a standout on the team.

Benzie enters Saturday's Final ranked No. 2 in the coaches’ poll behind Lansing Catholic – the same scenario as last year.

"It would mean a lot to me and my teammates," Huddleston said of a potential three-peat. "That's definitely the goal – to bring back another title and make it 14 state championships (boys and girls) for the school."

The Huddlestons have had a personal stake in seven of those crowns. Brayden’s older brother, William, was on Benzie's 2009 championship team while older sister Makayla was on the girls’ title-winning 2011 squad. A cousin, Theresa Warsecke, was the lead runner on that 2011 team.

"There's a lot of talent in that family," Kelly said.

Brayden is the latest to step to the forefront. The junior won last Saturday's Regional by 40 seconds.

"I told him before the race I would like to see him run away with it," Kelly said. "I felt like he needed a good win heading into the state finals – to get that feeling of 'I'm ready.' That's exactly what he did.

"It was a good confidence booster. That's what you've got to have – 100 percent confidence if you're going to go in and have big goals."

Huddleston finished 27th (16:41.5) as a freshman and ninth (16:09) as a sophomore at his two previous MHSAA Finals. He ran a 15:40 earlier this season, and he's hoping to beat that Saturday. He's currently fifth on the school's all-time list, eight seconds behind his father, which, of course, has led to some good-natured fun between the two.

How often is it brought up?

“I’m working on it,” Brayden added. “It’s definitely a landmark I want to reach and surpass.”

Could it happen Saturday? That would be an opportune time since Benzie will be facing a talented field that includes Lansing Catholic, Hanover-Horton and Shepherd. Lansing Catholic beat Benzie in the Cougar Falcon and Portage Invites earlier this year.

But that was the case last year, too. Then Benzie won the MHSAA title by 54 points.

"Anything is possible," Kelly said. 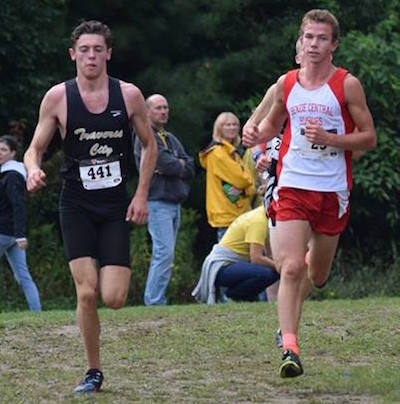 "It will be a challenge, but I think the boys can do it," Bill Huddleston said. "They're really coming together as a team. They're all improving."

Kelly, who believes it could come down to the fifth runner, likes his team's experience.

"Our top guys are juniors and seniors," he said. "Four have run there (MIS) multiple times. I like it that I have that experience. I think the kids are confident and will be relaxed."

Williams can motor, too. He ran a 15:47 at Portage, edging Huddleston by four seconds. It was the first time Benzie put two runners under 16 since the 1980s. Williams finished 25th overall in last year's LPD3 Final, Robotham 34th.

Huddleston, though, is the leader.

"He's the kind of guy who thrives on competition in big meets," Kelly said. "A lot of people get nervous, but kids like Brayden get excited."

Huddleston enjoyed a strong track season in the spring, taking fourth in LPD3 in the 1,600 and sixth in the 3,200. He was also on the 3,200 relay team that came in fourth.

Two weeks after the MHSAA Finals, he set a school record in the two-mile by running a 9:19 in an elite race outside Chicago.

Huddleston didn't let up either. His brother, William, a senior majoring in engineering at Ohio Northern, took an internship in Traverse City over the summer so he was home to train with Brayden. One of William's cross country teammates at Ohio Northern came up to train as well. Ohio Northern won the Ohio Athletic Conference championship Saturday.

"Brayden looks up to his brother," Kelly said. "He learned a lot about discipline. He would see his brother go to his job all day, come home and then still put the miles in. It was great for him to see that because it's easy to be talented, but it's a lot tougher to be disciplined and take that talent and continually improve."

Huddleston started the season by locking horns with Traverse City Central standout Anthony Berry in an invitational at Benzie. The two were going almost stride for stride until Berry surged ahead in the final mile. Huddleston still finished with a personal best 15:40.

"He knows he can run with just about anybody," Bill said. "He gets out there and goes for it. He doesn't shy away from (the competition)."

Kelly said competing against runners like Berry sets a bar for Huddleston to try and reach. 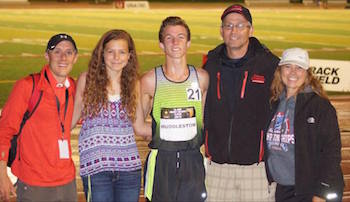 Not only is Huddleston's confidence up, so is his foot speed, which has really helped him close out races.

But right now all Brayden Huddleston is thinking about is Saturday. What would be a good day for him?

"Individually, I would be happy if I could be in the top three and run a 15:30 or so," he said. "Most of all, though, I want to do as well as I can for my team so hopefully we can three-peat."

That's what Kelly likes to hear.