BROOKLYN — Hunter Jones isn’t running against his peers on the current MHSAA Lower Peninsula Division 3 cross country scene, because he’s actually without peer at that level.

The Benzie Central junior is actually in pursuit of a legend from the past.

Jones is one victory away from becoming the first boy to win four outright MHSAA individual championships after another dominant performance Saturday at Michigan International Speedway.

Jones crossed the line in 15:08.39, the third-fastest time in Division 3 history.

The only boys to win four races at an MHSAA final meet is the late Ryan Shay of Central Lake. Shay won his races every year from 1993-96, but his time in the 1993 individual race wasn’t the fastest in Class D that day back when there were separate races for individual and team qualifiers.

Jones has beaten all comers in Division 3 for three years in a row.

“Ryan Shay is a big inspiration for me,” Jones said. “I look up to him very much. He was the only guy who won four times in a row. That’s my goal, to be like Ryan Shay. He was an NCAA champion; I want to get to that level.

“We’re about an hour-and-a-half from (Central Lake). I met their family. It’s really cool.” 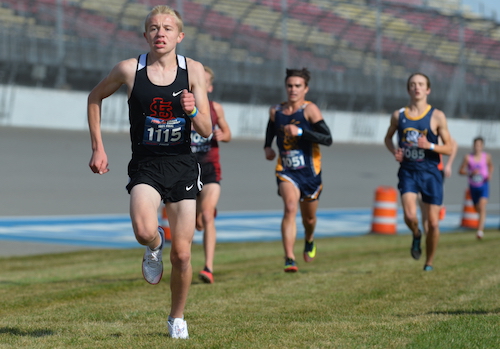 The only runners to beat Jones this year were Division 1 stars Riley Hough of Hartland and Peter Baracco of Farmington, as well as Connor Ackley of Hilliard Davidson in Ohio. All three finished ahead of Jones in the Spartan Elite race at the Spartan Invitational, while Hough also won a showdown with Jones in the Pete Moss Invitational on Benzie’s home course.

“I raced Riley a couple times,” Jones said. “I was pretty disappointed with how I did. It is what it is. I’ve just got to concentrate on my own race and try to get faster; that’s all I can do.”

As Jones crossed the line, runner-up Noah Morrow of Manton was just coming into view down the long home stretch at MIS. Morrow finished in 15:49.09.

Morrow was also second at Regionals to Jones, who ran 14:44.4 that day.