Three sets of Kalkaska brothers will be running together again this weekend. And most likely Tyler Guggemos and Hayden Moore, both seniors, will be leading the Blazers.

This time, they’re running in the mud – the Charlevoix Mud Run.

The Mud Run is held every year by the Charlevoix Rayders. It’s a favorite of most teams as they overcome obstacles and challenges while getting a little dirty in the process. With multiple knee-deep mud pits, logs and other obstacles strewn throughout the course, overcoming those are at least as important as racing opponents when it comes to achieving a good finish.

Many of the teams are Kalkaska’s opponents in Lake Michigan Conference races and possible obstacles for MHSAA Finals qualification. And East Jordan, a league opponent, also is hosting the Regional.

The Mud Run will help the Blazers along in meeting the season goals.

Guggemos and Moore hope to qualify for the Lower Peninsula Division 3 Finals at Michigan International Speedway in Brooklyn. They’ve set their sights on individual qualification but have high hopes the whole team will be there, including their younger brothers Gavin Guggemos and Camden Moore, and senior twins Jake Olds and Dave Olds.

“We would like to finish in the top half of the teams at the Lake Michigan Conference meet and take a shot at qualifying for the state finals,” said Kalkaska cross country coach Doug Brown, who has coached all the brothers since they started running middle school track. “We'd have to be in the top three finishers at Regionals to do that.

“We'd at least like to get two or more runners to the state finals.” 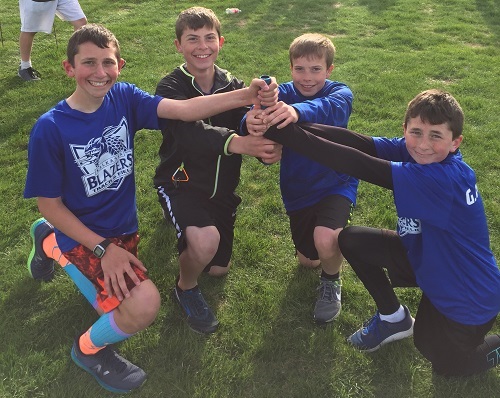 Hayden Moore would love to reach the Finals with his younger brother coming along.

Tyler Guggemos, who has a shot this fall at breaking Kalkaska’s cross country school record, agreed.

“I would like to make it to the state cross country meet and be in the top five in the state,” he said. “It would be great if the team made it too!”

The Blazers are off to a good start competing in McBain, East Jordan and Benzie Invitational meets with Guggemos finishing first for Kalkaska and Moore second. Their younger brothers as sophomores round out the top four. The twin Olds brothers are also pushing them along.

There’s a little sibling rivalry helping the Blazers, the boys acknowledge, but none noted between the brothers. The six boys have been running for Kalkaska together for six years, starting on the middle school track.

“Having a brother on the team is a gift and a curse because, well, we are brothers and it’s fun to spend time together, to an extent.”

“It's nice to have someone to try to chase,” he said. “It's not a rivalry because he makes me want to be better.

“It's fun to train together,” Gavin continued. “My goals this year are to run in the 17s and make it to states.”

The younger Moore views it similarly.

“It’s not really a competition, although it is fun to compare times and say that you’ll catch them,” Camden said.  “When it comes to times it’s fun to try to beat his when he was in my grade.” 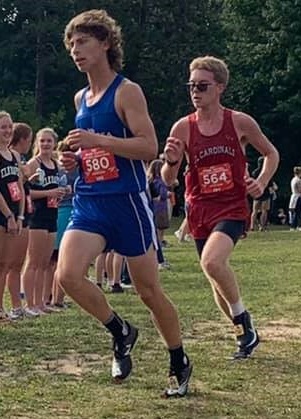 “I think that it's a rivalry in that my brother races to beat my PR (personal record) at the same age and I race so that he can't beat my PR when he gets to my age,” he said. “We also have a rivalry over summer miles.”

The Guggemos and Moore brothers teamed up to run the 3,200 relay as sixth and eighth graders and then qualified for the Track & Field Finals in the 3,200 last spring as freshmen and juniors.

Brown is looking for even more success for all three pairs, but he remembers fondly the start in middle school track, especially the 3,200 relay team.

“I was very happy for them, because we thought they were a good team in middle school, and it was great to see them live up to their potential a few years later,” he said. “They were thrilled to be able to make a trip to the state meet together.”

Looking ahead, Kalkaska will host an invitational Sept. 21 after going to Elk Rapids on Sept. 16.

At Elk Rapids, the brother pairs will compete against Coach Brown’s son Seth, a sophomore. The Elks also have a brother duo – junior Caleb Kerfoot and sophomore Christian Kerfoot.