BROOKLYN – When Carson City-Crystal’s Coleman Clark crossed the finish line Saturday, he raised his arms over his head and belted out a loud scream.

He had plenty of reasons to celebrate.

The senior captured the Division 4 individual title at the MHSAA Lower Peninsula Boys Cross Country Finals, beating out a loaded field in the second of two races in the division. He broke 16 minutes, finishing in 15:58.55.

“My goal was to come in here and win it,” said Clark, who finished runner-up to Breckenridge’s Mason Sumner a year ago. “And to have my team win as well, this is awesome.”

Clark said his strategy was to take an early lead and keep it. That’s what he did.

“Throughout the race, it could have been anybody’s. But once I got to the stretch, I knew I was going to win it,” he said. “This is the strongest front pack we’ve had in a long time. There were a lot of top runners up there. I’m friends with a lot of them. I race them all the time. 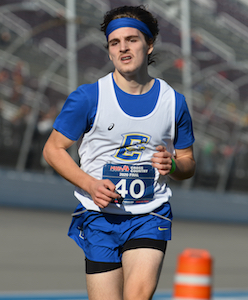 As a team, Carson City-Crystal was solid one through five. Junior Ashton Keiffer finished 25th overall, earning all-state honors after running a time of 17:38.74. Also scoring for the Eagles were sophomore Brayden Clark and seniors Jared Shepler and Calvin Clark.

“In past years, we haven’t had a super, great team,” Clark said. “This year, we’ve got the most amazing, talented group of guys I’ve ever raced with. I knew that we could pull off a state title if we worked hard.”

Head coach Grant Woodman knew a championship would not come easy. But when he learned his team had accomplished the feat, he was more than fired up.

“It’s pretty freaking awesome,” the coach said, still somewhat in disbelief. “Our history at the school is pretty steeped with tradition, so to bring a state title back is pretty cool.

“We knew it was going to be a fight from the beginning. Saugatuck, Breckenridge and Webberville, we’ve been fighting back and forth with those teams all season. Breckenridge is in our league, and we’ve been keeping an eye on Saugatuck on the other side of the state. They are a powerhouse every year.

Concord was third overall, followed by Kalamazoo Christian and Saugatuck in the top five.