BROOKLYN — It finished as expected, with a duel between Algonac senior Morgan Beadlescomb and Corunna junior Noah Jacobs.

However, the two fastest runners in the state this season had company for longer than anticipated during the MHSAA Lower Peninsula Division 2 meet Saturday at Michigan International Speedway.

A pack of four runners entered the stadium with about 1,200 meters remaining, with Pontiac Notre Dame teammates Brendan Fraser and Nathan Mylenek intent on crashing the party.

With the finish line in sight on the long straight away, the two favorites separated from Fraser and Mylenek and launched a battle for the championship. Beadlescomb prevailed to repeat as Division 2 champion with a time of 15:26.5. Jacobs was second in 15:30.5, with Fraser taking third in 15:39.4 and Mylenek fourth in15:40.5.

Even at the highly competitive Portage Invitational on Oct. 10, Beadlescomb and Jacobs cleared the field by the mile mark and raced to the two fastest times in Michigan this season. Beadlescomb edged Jacobs by one second that day with a time of 14:59.

The difference this time was the wind, into which nobody was willing to push the pace alone up front.

"This race was completely different," Beadlescomb said. "I knew it was going to be a kicking race before the first mile. Something inside me was just saying, 'Go,' but I had to stay because people behind me will just use me and that will waste energy."

"Neither of us likes to take the lead and eat the wind," Jacobs said. "I figured somebody would take it for us, which happened."

They met twice during the regular season, with Jacobs finishing nine seconds ahead of Beadlescomb in the Spartan Elite race at the Spartan Invitational on Sept. 18 before Beadlescomb won Portage.

"He's a great kid," Beadlescomb said of his rival. "We wish each other luck every time we see each other. It's good competition. We're hard and we push each other, but it's good. It really helps both of us. I can't wait to see what he does next year as a senior." 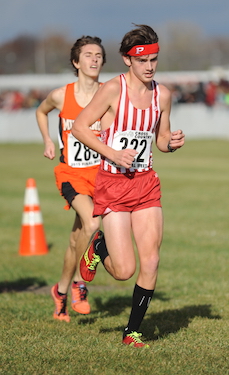 While disappointed over finishing second, Jacobs would prefer a race like Saturday's to any of the easy victories a runner of his caliber routinely racks up during a season.

"It's a lot more fun to go out there and have great competition and really do something special than if you win your conference by 30 seconds or something like that," said Jacobs, who was fifth in the Final last year. "It's special to go out and see your training pay off in a big-time situation like that. I wanted to win today. I'm handling this well right now, but deep down I'm pretty hurt. I wanted to come out and win today. Morgan's a great competitor. I knew it would be a tough race. He outraced me."

The battle for the team championship wasn't nearly as close, as Fremont rolled to a 69-162 victory over runner-up Otsego.

Fremont had four runners in the top 19, led by fifth-place junior Matthew Zerfas in 15:44.7. Zerfas was fourth last year.

Ranked No. 9 coming into the meet, Otsego's boys were the lowest-ranked team to take home a championship or runner-up trophy in any division Saturday. Only 12 points separated second-place Otsego from fifth-place Corunna.

Third-place Clio (171 points) had the best finish in school history, improving on fourth-place showings in 1963 and last year. It was the first time since 1963 and 1964 that the Mustangs have made the top 10 in back-to-back years.

PHOTOS: (Top) Algonac’s Morgan Beadlescomb (446) and Corunna’s Noah Jacobs (294) stayed with the lead pack early before breaking away near the end of the Division 2 Final. (Middle) Fremont’s Cole Hamilton (322) works to stay ahead of the Clio’s Ethan Taljonick. (Click for more from RunMichigan.com.)