BROOKLYN – Evan Bishop of East Grand Rapids had already established himself as one of the elite runners in a state known for producing great distance talent.

But while Bishop had credentials and a reputation that stacked up favorably with anyone’s in Michigan, he didn’t have an individual MHSAA championship on his resume.

That changed Saturday when he won the Lower Peninsula Division 2 meet with a time of 15:12.6.

In the process, he defeated one of the runners who deprived him of getting an MHSAA championship sooner, Dearborn Divine Child senior Anthony Hancock. Hancock was second in 15:18.2.

Bishop was second in cross country last year to Otsego senior Alex Comerford. In the spring, he took second to Hancock in the 3,200-meter run with a time of 9:08.03. In between those performances, Bishop earned All-America honors at the Foot Locker National Cross Country Championship in San Diego by placing ninth.

“Last year I made it to some of the national meets, and it was a big surprise,” Bishop said. “This year coming back, it’s like I know I’m at that level. I’m just trying to improve upon last year. I’ve checked those boxes. I made it to nationals, I was second three times last year. Honestly, this season, my biggest goal was winning this race. I couldn’t be happier.”

Bishop emerged victorious in a race that featured four runners who have broken 15 minutes. It was unlikely anyone would break that barrier Saturday on a muddy course and in windy conditions. 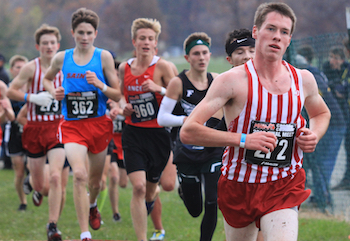 “If the weather would’ve been a little bit better, the extreme level of the field this year is just amazing,” said Bishop, who won 10 of 11 meets and didn’t lose to a runner from Michigan this fall. “Times could have been really fast.”

When Hancock crossed the line, he immediately turned around to watch the battle for third place. He had a vested interest in the outcome because his twin brother, Michael, was battling Fremont’s Nathan Walker. Michael Hancock edged Walker by two tenths of a second with a time of 15:23.7.

“Going into it, we were hoping for one and two,” Anthony Hancock said. “It didn’t end up happening, but we did end up going two and three. I knew Michael and Walker would be battling it out. I had a feeling Michael would beat him, because his kick is so strong. I turned around, and I saw him pass him.”

Walker did come away with the satisfaction of leading his team to a championship, as Fremont dominated the field with a 68-point performance. Otsego was second with 176. It was Fremont’s eighth MHSAA championship, the last coming in 2015.