ELLSWORTH — Running fever is running rampant in Ellsworth, and it’s got quite a grip on the small Antrim County school.

Despite having fewer than 100 students in their high school, the Lancers’ boys and girls cross country teams thrive on a statewide level, thanks to nearly two dozen runners who grace the team’s roster — a number that holds pretty steady from year to year.

“I like to believe I don’t do any recruiting,” said head coach Ruben Oviedo, in his sixth year leading Ellsworth’s program. “I simply invite kids. Honestly, I just want our kids doing something.”

Running is the avenue that many at the school elect to take. Sometimes they’re just following in the footsteps of an older sibling. Some start with other sports but become drawn in by friends who are on the cross country team. Others are persuaded into giving running a try by Oviedo, who has even sought out kids who aren’t involved in anything as they’re heading to the bus after school to see if they’re interested.

“It’s fun to try to get kids who wouldn’t be invited to a high school varsity sport,” said Oviedo. “It’s fun when they say, ‘I hate running.’ It’s fun to say, ‘You’re the kid I want’ and to challenge them.”

What all of them discover is a family atmosphere that welcomes each of them with open arms, and where they get an opportunity to develop and compete on a perennially strong squad.

“I think a lot of people just like being a part of something,” said senior Isaiah Romeyn, the top runner on the Lancers’ boys team. “Cross country is a lot different from other sports, where it’s more of a family environment. It’s a lot more like an actual family.”

That kind of vibe is what drew Oviedo to running in his own right. The 2008 Ellsworth graduate joined the cross country team his sophomore year and helped the Lancers reach the MHSAA Lower Peninsula Division 4 Finals three straight years, highlighted by a sixth-place finish in 2007.

“That’s what kind of roped me in was so many friends and people were doing it,” remembers Oviedo. “Why not? (Former head coach) Kirk (Ikens) just made it all about being a team and making it fun.”

Oviedo has carried over that philosophy since taking over for Ikens in 2013. 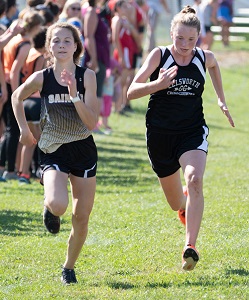 “They let me punish them into running, but I like to say that running isn’t punishment,” said Oviedo. “I’ve never used running as a punishment. Most of the time I like to use it as an escape. Hey, we’re stressed out. We’re having a bad day. Let’s go run and lose our minds in the woods. That’s one of the things I’ve tried to put into place. We try to get out of Ellsworth, and we try to go somewhere else to run different places just so it’s not the same place all the time.”

The Lancers often have ended the season in the same place, however — the Division 4 Finals. The boys squad has put together a string of four straight Finals’ appearances, with last year’s fourth-place finish the school’s highest. They were the only team among the top five with an enrollment under 100 students.

The girls team has qualified for the Finals in back-to-back years, last year tying for 17th. Both teams have the capabilities to return to Michigan International Speedway — the annual site of the Finals — again this year, too. Ellsworth’s boys have six of their top seven back, while the girls return four of the top seven.

Romeyn earned all-state honors a year ago when he finished 13th at the state meet. His older brother Winter, a redshirt junior on the men’s cross country team at Michigan State, was a two-time all-stater in 2013 and 2014, finishing ninth and eighth, respectively, at the Finals. Winter also proved to be a big influence on getting Isaiah into running.

“He started me with running, and he encouraged me to join the team,” said Isaiah. “I ran because he was on the team. It was mainly because he was there. I wanted to be with him.”

Isaiah remembers watching his brother’s success, but also seeing what a tight-knit group the Lancers were and feeling connected himself.

Romeyn is getting his biggest push within the team from junior Robbie Wise, who was Ellsworth’s fifth counter at last year’s Finals, but has seen his performance jump so far this season. A good summer of work equated to a fast start to the season and vaulted Wise into the company of Romeyn.

“I can’t believe how much effort I put into it,” said Wise, a football player who converted to cross country as a freshman. “My first year I would remember all these insane runs. Ruben would say, ‘OK we’re going out for six miles.’ Just one mile sounded insane. Now, as somebody who runs over the summer — I got over 150 miles in over the summer — six miles doesn’t sound near as bad.”

Seniors Lucas Sweet, Richard Adams, Alex Adams, and junior Caleb Godwin give Ellsworth a formidable veteran lineup that has shown it can compete with anyone in the state.

The girls team is anchored by a pair of sophomores in Christy Figueroa and Judy Veldboom. Figueroa has competed at the Finals the past two years, including with a 38th place as an eighth grader that was Ellsworth’s best individual finish in a 19th-place team performance. 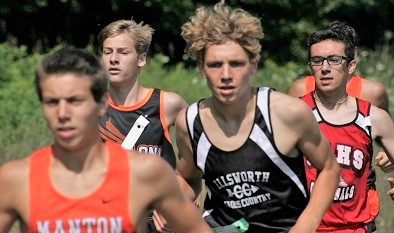 “It was really stressful being in my shoes (as an eighth grader), but I enjoyed it,” said Figueroa, who started participating in the sport as a sixth grader and quickly proved to be a natural.

Veldboom burst onto the scene last season as a freshman and created a dynamic duo with Figueroa. The two were separated by six places and a total of 14 seconds at the Finals and have a healthy competitiveness between them.

This season Figueroa and Veldboom have seen eighth grader Maia Romeyn, the younger sister of Winter and Isaiah, enter the picture to give the Lancers even more depth at the top.

“She’s pushes me and Christy to keep going,” Veldboom said. “She’s one of my best friends, so she inspires me to run faster. She’s a great asset.”

Ellsworth is one of the few schools in the Northern Lakes Conference that has enough runners to earn a team score in league meets, which it’s dominated in recent years. On the Regional level the Lancers have formed a rivalry with East Jordan, a school just a few miles down the road but with more than twice as many students.

“I think we can get first place in the Regional and make it to states,” said Veldboom. “That’s my goal for this team. I think we have a really strong team.”

Ellsworth is undaunted about running against the Red Devils or any of the other larger schools it races. Those are the kinds of tests Oviedo likes to give his runners as they navigate through the season, and the Lancers have shown they’re capable of holding their own.

“It shows that we really put in the effort and want it,” said Wise, who has the bar set as high as possible for his team. “I hope this year we can win states. We got fourth place last year. I think it’s within our grasp.”

PHOTOS: (Top) The Ellsworth boys and girls cross country teams after a Northern Lakes Conference meet this season. (Middle) Judy Veldboom, right, tries to get past a St. Ignace runner near the finish line of the House on the Hill Invitational. (Below) Isaiah Romeyn runs with a pack during the Central Lake Invitational. (Top two photos by Olivia Adams; below photo by Chris Dobrowolski.)