Not by a long shot.

So, he took zero time to soak in the moment after he won the MHSAA Division 2 individual cross country championship Saturday at Michigan International Speedway.

Instead, he turned around and kept a close eye on the runners finishing behind him, hoping to see the white Corunna singlets not too far back.

The first teammate he greeted was his sophomore brother, Ben, who finished eighth in 16:01.8.

Before long, he would be reunited with the rest of his teammates. When the places were added up, not only did Jacobs win an individual championship, but he led his school to the team title.

With his time of 15:28.0, Jacobs joined 1998 winner Jared Aldrich as the only Corunna boys to win the individual title. He won by 12 seconds over Pontiac Notre Dame Prep senior Brendan Fraser.

“I came into the stadium, and the wind was in my face,” said Jacobs, who recently committed to run for the University of Wisconsin. “It was a battle that last mile, it really was. It was one of the harder races I ever ran. The course was a little bit soft; it wasn’t exactly ideal. I’m proud. I gave it everything I had, and my team gave it everything they had. That’s all you can ask for. What I take away from it is it’s a great last race in my Corunna jersey.”

The cross country championship has eluded Jacobs, who has two MHSAA Division 2 track and field titles in the 3,200-meter run on his resume. He was 56th as a freshman, fifth as a sophomore and second to two-time champion Morgan Beadlescomb of Algonac as a junior. 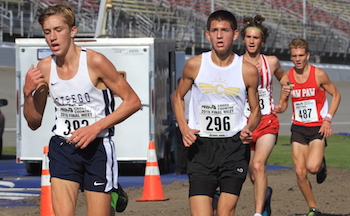 Jacobs has a personal best of 15:00 in cross country and 8:55.57 in the 3,200, so he had hoped to put his name among the all-time greats who have ever run at MIS. That plan changed when he saw that rain from earlier in the week turned portions of the course into slop.

“Originally, I wanted to run in the 14s,” Jacobs said. “But running the warmup on the course and figuring everything out, it wasn’t worth my time to go out and only think about time. It wasn’t going to be beneficial. It was just going to end in a day I felt I could do more.”

Even with the graduation of Jacobs, Corunna should be well-positioned to repeat next year.

The Cavaliers ran only two seniors Saturday, the other No. 5 man Kyle Mesh. There might even be a future individual champion in the Jacobs household.

Ben Jacobs was fourth among non-seniors and the second sophomore in Division 2. His time was only 5.2 seconds slower than Noah ran as a sophomore at MIS.

“He was one of two guys who PR’d today,” Noah said. “He ran awesome. A lot of people in Michigan don’t know Ben that well. Ben’s a sophomore this year. He has a lot of big things coming. He’s faster in the mile (as a sophomore), but in the 5K he’s a little behind me, but we’re close.”

Fremont has won eight MHSAA championships, but was trying to repeat for the first time. Grand Rapids Christian finished third with 139 points.