Hartland’s Riley Hough and Pinckney’s Caleb Jarema don’t see a lot of each other during their respective seasons, despite their schools being both located in Livingston County.

Hartland is in Division 1 and Pinckney in Division 2, for starters, and they are in different conferences as well.

They might have a rare chance to compete against each other in October’s Portage Invitational, provided Pinckney coach Jim Wicker can get his team into the Division 1 portion of the meet.

Otherwise Hough, who won the Lower Peninsula Division 1 Finals individual race last year, and Jarema, who was second last year in Division 2, may not face each other during this fall’s MHSAA season.

“We know each other pretty well,” Hough said. “We don’t talk too much, but when we’re racing we’re always talking a little bit.”

That is, until it’s time to go.

“Yes,” Hough said. “That’s when it gets silent and pretty serious.”

Both played soccer before turning to cross country. Hough got his start running while working on conditioning before playing soccer in the fourth and fifth grades.

“Then I did some local 5Ks, like the Howell Melon Run and the (Howell) Headless Horseman runs, and I saw I did pretty well for my age,” Hough said. “So did my parents. So we decided I could try cross country in the sixth grade, and it took off from there.”

Jarema took a different route. He played soccer and ran cross country his first two years of high school before giving up soccer before his junior year in 2020.

“I just started to enjoy running a lot more than soccer,” he explained, “and it became really hard to do both.”

It certainly worked out. Jarema improved from a 38th-place finish as a sophomore to second as a junior.

Both come from running families.

Jarema also was inspired by his older siblings. Brother Aaron is a senior at Ferris State University, while sister Courtney ran for a season at Oakland University.

“My brother was running for Pinckney, and I would be at his meets and it just seemed like a really fun environment,” Jarema said. “My brother was one of my role models, and I liked watching him run. I wanted to do the same thing he did, and then I ended up really enjoying it.”

Hough’s father, Jeff, competed at Corunna in high school, then went to Central Michigan University before finishing his career at William & Mary. He is an assistant coach at Hartland, and father and son talk running while driving to and from meets, among other things.

“He’s fortunate, or unfortunate, however you look at it, that he has to live with me,” Jeff says. “So we can discuss these things one-on-one. He’s very consistent at what he does, and it’s just a matter of improving from race to race. We’re down into small detail things now. He’s got the racing portion down now, We’re into the small, nitty-gritty things that can make a difference.” 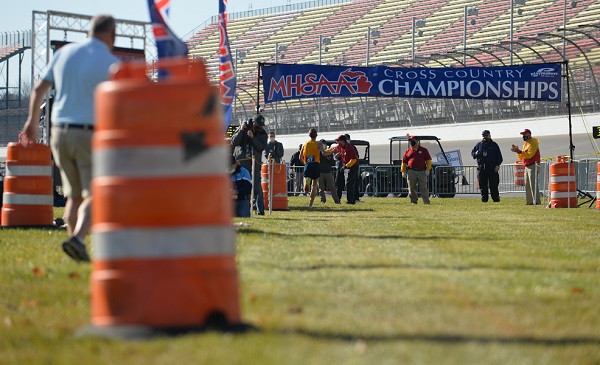 Both also know they are on everyone’s list this season. Hough's 14:49.62 last year was the second-fastest Finals time, all classes and divisions, since the championship race went to 5K in 1980. Jarema was one of only four runners to break 16 minutes in Division 2, and the other three runners graduated.

“There definitely is a mental pressure of having a target on your back,” Riley Hough said. “I’ve had it for a while and I know what it’s like. It’s hard. It helps push me along as well. It’s a little easier now that I’m used to it. Now that I’m a senior, I have these fast times and people are going to be gunning for me. It’s definitely going to be interesting.”

The times are the times, which give both confidence without veering into cockiness.

That also allows Jarema to admit, without any personal animosity, that he’s never beaten Hough.

“I feel I’m as good as anyone in the state,” Jarema said. “I mean, Riley is a phenomenal runner, and I may not be better than him. But I feel I can compete with him, for sure. So I feel there’s a target on my back, and yeah, I would say that it pushes me to be better off, for sure. I know there are kids who are working just as hard as me and are looking for the same type of breakout season.”

Both runners are part of teams that are close. Jarema talks about the importance of family, both his own and one created by his teammates. Hartland coach Matt Gutteridge, meanwhile, talks about Hough’s contributions on and off the race course.

“What I appreciate about Riley is how consistent he is,” Gutteridge said. “Whether it’s the training, or showing up and doing the little things, the leadership, I mean, he’s stepping up his game everywhere. He’s a consistent teammate and a consistent athlete. It’s fun to coach someone who’s that darn consistent.

“What he’s been able to do day in and day out still surprises me,” Gutteridge added. “He’s smart about his training. Even when he gets nicked up, he doesn’t shut it down. He pushes through it and is smart about it. That’s where I think he’s going to be successful, long-term. He really listens to his body, trusts his coaches, and the sky’s the limit for him.”

“You could tell way back in the sixth grade he was going to be something special,” Wicker said. “He was always in the front, even if he was running against older kids. His talent and his competitive nature are just natural.

“He has high expectations and he really wants to be a Division I recruit,” Wicker continued. “He’s being recruited by some pretty good schools. I’m really proud of him. He’s doing a good job of staying grounded, keeping everything in perspective. He’s working hard, and I’m expecting big things from him.”

Hough and Jarema may have a few other chances to race each other this fall – potentially in non-MHSAA events after the Finals in November – and they’re both looking forward to possibly competing head-to-head.

“We definitely have conversations before the race, but once we get on the line it’s dead,” Jarema says of pre-race chit-chat. “He’s a super-nice kid, and I do really enjoy competing against him. You know, it’s more fun to compete against people who are friendly.”