MUNISING — The Gogebic and Brimley boys had never been crowned Upper Peninsula cross country champions before Saturday, and Houghton won for the first time in six years.

The race for the individual Division 1 title boiled down to a sprint between Houghton senior Clayton Sayen and Marquette senior Garrett Rudden over the final 150 yards, mostly uphill at Pictured Rocks Golf Club.

“This is just an unbelievable feeling,” said Sayen. “It was a great race. Garrett and Luke (Rambo) are amazing runners. Adam Bruce of Gladstone is also an awesome runner. I don’t know if I would have won if I didn’t have them pushing me. I knew it was going to be a battle and I gave it every ounce I could. Seth is also an excellent runner. It’s great to have people like this to run with everyday.

“I can’t explain how well our team did today. This is almost like a dream come true. I love the pain. I wouldn’t trade it for the world.”

Rudden led after the final turn before Sayen caught him shortly before the finish.

“Clayton’s finish was awesome,” said Houghton coach Traci Welch. “He had me worried going around the last turn and up the hill. But I knew he could do it. He doesn’t like to lose.

“We have such a great group of kids. Most of them I’ve coach for 4-6 years. I think our depth made a difference. We had big races from some of the guys.”

Bessemer-based Gogebic, which also includes athletes from Wakefield-Marenisco, captured the Division 2 crown with 22 points, followed by three-time reigning champ Ishpeming at 36 and Ironwood at 99. 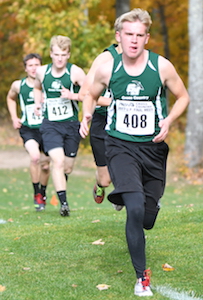 “It’s nice that everybody was healthy and did what they set out to do,” said Gogebic coach Lauren Korpi. “The guys have been working so hard. I think the West-PAC (Western Peninsula Athletic Conference) is one of the best out there. Running against Houghton all year really helped us, and we’ve become friends with them.

“We’re losing four seniors, but we’re hoping our program continues to grow. We have some strong underclassmen coming up. The future looks pretty good.”

“I didn’t really have a strategy,” said Giroux. “I just tried to run as hard as I could. I’m happy with how I ran. I think this is a confidence builder going forward. As a team, we’re a little disappointed. But it was a good day overall.”

“This wasn’t our best performance this year,” said Ishpeming coach P.J. Pruett. “We ran against Gogebic twice this year, and we beat them twice. Spencer ran real well, and we had a great season. We were missing our three seniors from last year, although we placed among the top two or three teams all year. Spencer is the number nine champion for Ishpeming cross country, plus we are losing only one senior.”

Brimley edged Chassell on a tie-breaker for the Division 3 championship. Each team scored 60 points, and third-place Rudyard had 118. 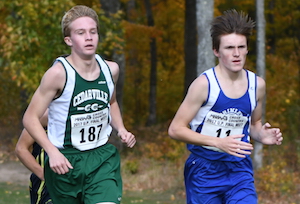 “We’re so excited about that,” said Brimley coach Scout Hester. “We had some good competition over here, and it was fun watching the boys compete. We’ve had good athletic programs, only we couldn’t seem to get over that hump. This is an exciting day for our program. All seven of our runners put it out there.”

“I ran the first mile in 5:20,” said Plotkin, who was clocked at 11:04.9 after two. “I don’t know what happened in the third. It felt like it was fast, only my time didn’t show it. Tom and I wanted to pace with each other. I set the pace for both of us and took off in the last 400 (meters). The first mile was right where we wanted it.”

PHOTOS: (Top) Houghton’s Clayton Sayen (127) works to stay just ahead of Marquette’s Luke Rambo (209) and Garrett Rudden (210) during the Upper Peninsula Division 1 Final. (Middle) Isaiah Aili leads a pack of Gogebic racers on their way to winning the Division 2 title. (Below) Brimley’s Austin Plotkin, right, and Cedarville’s Thomas Bohn pace each other at the front of the Division 3 race. (Photos by Cara Kamps; click for more at RunMichigan.com.)