Jacobs is considered the state’s preeminent high school distance runner by many heading into this, his final season. He was runner-up at last year’s MHSAA Lower Peninsula Division 2 Final with a time of 15:30.5, which was ninth-fastest in any division and third among non-seniors, and he’s also the two-time reigning LPD2 champ in the 3,200 and set a meet record in the spring with a time of 8:55.57. Jacobs earned the first Michigan National Guard “Performance of the Week” of this school year after clocking a 15:43 to win the Medium Schools race at the annual Corunna Earlybird Invitaitonal while outpacing all runners at the event by at least 55 seconds.

Jacobs holds Corunna’s cross country record of 14:59.5, which he ran at the Portage Invitational last season in finishing second to now-graduated Algonac standout Morgan Beadlescomb – who also finished ahead of Jacobs at the MHSAA Final. Jacobs did win the Greater Lansing and Greater Flint meets and his Regional, and gained additional individual acclaim over the summer by winning the 2-mile championship at the New Balance outdoor national meet with a time of 9:03.71. Even with a bright future guaranteed, he has continued to set lofty high school goals, including leading his cross country team to its first MHSAA team championship since 1997. The Cavaliers finished fifth in LP Division 2 last season, and five of the team’s top seven from that race return. They also are getting an additional boost from Noah’s sophomore brother Ben, who is already coming close to or surpassing Noah’s personal records at that age. Noah Jacobs also should continue to drop his school record time this fall, as he’s running faster than at this point a year ago.

In addition to his running excellence, Jacobs carries a 3.98 unweighted grade-point average (4.12 weighted) to rank among the top few in his graduating class. He’s considering University of Michigan, Michigan State, Notre Dame, Wisconsin and Stanford and careers in business or statistics after his running days at Corunna are complete.

Coach Bryan Heid said: “Noah has run every day since the summer before his freshman year. He also encourages others to do the same and to believe that they can do things they would otherwise not even dream of. He sets incredibly high goals and then goes out and puts those words into action. He is patient and sticks with the process. Every year he gets better and better because he does not try to skip steps. … If you want to understand what makes him a great leader, watch him after he crosses the finish line of a race. He knows that his race is not done until all of his teammates have finished. You will see him back out on the course cheering for the guys in the race he just ran with everything he had. Somehow he finds more and encourages the rest of our guys to give their best as well. Personal records are great, but team success is what truly drives him and causes him to celebrate. When our team has a great race, he is on top of the world even if his individual race did not meet his goals.”

Performance Point: “I was pretty happy with that (Earlybird time)," Jacobs said. "I wanted to run just a little bit faster, but I didn’t fully empty my tank. I ran a controlled race, didn’t try to overdo it at any point; I stayed comfortable but pushed it. … I wanted to go out and lead our group of guys; hopefully as a team we can chase a state title as well. I showed everybody that I’m still fit and I didn’t back off even though I’ve accomplished some of my goals.”

Big finish: “I have two big goals this season; the first is the win a team state title, and the second is to break the state record Dathan Ritzenhein has (14:10.4 for Rockford at the 2000 Finals). We’re into the part of the season where there’s a lot of training, and there are a couple races where it won’t show up and people won’t see it and question where I’m at. But once I get (there), in October, I’ll be ready to run really fast. … This is my fourth year doing the same general type of (training). I know what it’s like at this point  in the season. It gets kinda hard, but at the same point, I know I’m going to see the benefit of what I’m doing now.”

High school matters: “It’s everything to me, that I can still do this for one more year, help out all the guys who helped push me through the years, and carry on the legacy of the guys who helped me when I was younger. Still represent my school and community in a good way, still be the change in athletics in Corunna, trying to lead the way for the generation of guys who are working really hard to be successful.” 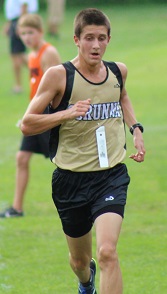 Brother’s catching up: “I see everything he does. I know how he works, really well, what works for him and what doesn’t. Everything we do for the most part is together, and it’s great to have him chasing all of my records because he’s going to work for it. But it’s also great for me because I have to have that edge in the sibling rivalry when we go to family reunions in 10 years. (So) I’ve gotta make him work for it; nothing's going to be easy for him.”

Getting down to business: “My dad is a business guy, and he owns a small business and has been successful and given us a good life – when we need a pair of running shoes, it’s not a problem, and we’re able to eat out once in a while. I would like to be at that same point when I’m that age where I can support my family well. And statistics, I’m a big numbers guy. During cross season I look at us, I look at other teams and where we stack up. Our cross coach was our stats teacher when I had it, and he made it interesting, and I saw all the difference fields you can go into.”