In only his second season running cross country, the Braves standout has assumed the lead position as fastest in the Upper Peninsula. Bruce won two league championships last week, at the Mid-Peninsula Conference meet (16:50) and three days later at the Great Northern Conference final (16:53) to earn the Michigan Army National Guard “Performance of the Week.”

Bruce arguably is a more accomplished wrestler – he started in that sport in first grade and is a three-time MHSAA Finals qualifier and two-time placer, taking third at 130 pounds in Division 3 last winter. He decided to try track & field as a freshman, but as a pole vaulter – he wanted nothing to do with running. But his coach convinced him to run a 1,600 time trail, and Bruce broke 5 minutes – and as a sophomore he won the U.P. Division 1 championship in the 3,200. Bruce holds the track team’s records in the 1,600 (4:31.7, breaking a record from 2005) and 3,200 (9:52.8, breaking a record from 1988) and ran the cross country program’s record 5K this fall, a 16:05 at the El Harger Invitational at Pictured Rocks Golf Course, the site of this Saturday’s U.P. Finals.

In his first season last fall, Bruce finished fourth at the U.P. Division 1 Final behind a cast of senior standouts – Houghton’s Clayton Sayen and Marquette’s Garrett Rudden and Luke Rambo – and he chased Negaunee’s 2016 champion Colton Yesney in regular-season competition. This season, Bruce took advantage of a rare opportunity to make his mark downstate Sept. 5, when he finished second in the Division 3 race at the Holly Invitational with a time that also would’ve placed him first in the event’s Division 2 race. Bruce also carries a 4.0 grade-point average and is ranked third in his graduating class. He’s undecided where he’ll attend school after graduation but intends to run; he plans to study either education or physical therapy, depending on which of his finalists he selects.

Coach Gary Whitmer said: “This is my 18th season of coaching at Gladstone High School, and I never have had a dedicated and driven athlete like Adam; he loves to run. He is such a team leader, always encouraging all athletes – boys and girls) – on our team to do their best. He likes to ask me what the workout for the day is, and than he will get the attention of the rest of the team to make sure they know what is going on. … This year the U.P. state Finals will be in Munising – we ran the course on September 25, and Adam broke the course record, running 16:05 on a cool rainy day. We are hoping that Lake Superior doesn't bring in its nasty October weather and that we have a beautiful day this October 20, and Adam will have a chance to break 16 and bring home a U.P. state cross country title.

Performance Point: “For me personally, it was amazing, because not just individually did I have the success, but our team really stepped it up – especially at the second conference meet, the GNC,” Bruce said of the league title double. “We finished just behind Marquette, with our closest finish ever in our program history to them, so we’re super proud of that. Individually, it was something that I’ll never forget. It’s something that makes me proud, and I can say that it was for my school and the hard work paid off a little bit there. Hopefully it will help me have a better performance at the Finals – it gives me some confidence, and it gives our team a lot of confidence, so we’re excited about this weekend.”

Next U.P. star: “All four years of my high school – I started out in track & field and I came into cross country as just a junior – watching those guys succeed when I was a freshman, it was always my goal to be like them. And the best part about it, I don’t know if it’s to say ‘filling the shoes,’ but being able to step up and show the young runners all of this hard work and just keeping your team motivated and keeping yourself motivated, that you can get there too. Because to be honest, at the beginning I never thought I’d be running some of those times that I ran this year. I’m proud of myself for that, but I think that comes with having a great coach and having good community involvement. At all of our meets, having everyone there to support me, that really helps a lot. Those guys, Yesney from Negaunee and Rambo from Marquette and all those guys, they were a big part of it to because they pushed me all four years of high school so far. They’ve made me want to be better. They’ve made me strive to be like them. I think it’s cool to say that I can fill in the footsteps of those guys, like I’ve been trying my best to do this year.”

Late starter, fast learner: “I had run only one 5K before I came in as a junior, but what really helped me was having a little bit of work my first summer in cross country. I ran a lot that summer and got some mileage under me, and my coach helped me a lot. Coach Whitmer and Coach (Jim) Murtha up here are very knowledgeable about the sport, so them just teaching me that it’s going to come with time and you need to be a little bit patient, because my first few races I struggled a lot. I didn’t have the best times, and I was kinda bummed about that. But then I started to realize that it takes more than overnight to be successful in a sport. So I think I took it patiently, but at the same time I think I picked up on things really quickly. I learned to adapt to the 5K, and to me I fell in love with more of the longer distance because the longer the distance, the more fun I have doing it. … And I think obviously running against the stiff competition I had last year up here really helped. The guys from Negaunee and the guys from Houghton – they treat you like family, we’re all a big family up here – so it was awesome having those guys because I really learned from them.” 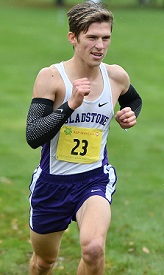 It’s the experience: “The thing is in athletics, I think the competition part of it is awesome, but at the same time these experiences that you get are ones that you’ll never forget for the rest of your life. For us to head down to Holly, it was something I can really say that I’ll never forget for the rest of my life. One, the competition was awesome and I enjoyed it a lot, and I had a fun time. … (And) what I thought was cool about that was the downstate kids, they got to experience a little bit of something that they never see – they never see schools come down from the U.P. for those meets like that. It was neat for us as well, because the majority of the kids on our team – we have a young girls team and really a young guys team – it was the first time they’d really ever experienced anything like that. So I think Holly was huge for us. It was a big building point for our season and a big building point for me. Taking second there gave me some confidence, and then I went in two weeks after that and ran my (best time) of the season so far. “

Wrestling with running: “I think a lot of my running success came from wrestling, because what I learned in wrestling is you’re only as good as you’re willing to train yourself to be. That relates a lot to cross country, because my mental toughness is something that helps me as opposed to others. I think I have that mental edge that comes with wrestling. I feel like I’m really able to push myself. Even when I’m struggling and having a bad day, I’m still able to finish because I know mentally I’m strong enough to finish. … (Wrestling) was also a downfall for me at first, because at first it took me a while to realize that running you can’t go 100 percent every day. You want to get in there and go 100 percent and give it your all, but you’ve got to take your easy days in running, and I think that’s one thing that took me a while to understand. But now that I’ve started to get it under control, it can only go up from here.”