BROOKLYN — On top of the normal pressure of racing in the MHSAA Cross Country Finals, runners in the boys Division 1 meet Saturday had to wait through two weather delays before taking the course at Michigan International Speedway.

Every team and every runner had different ways of coping with the extra dose of stress.

What did Ann Arbor Pioneer do?

“We just act like it never happened,” Pioneer junior Nick Foster said. “Our team stayed loose and tried to act like it was a normal race, a normal start. We actually did start singing Bob Marley’s ‘Don’t Worry About a Thing’ to stay loose. It’s fun. We knew this was a good opportunity for our team. We wanted to execute.”

The Pioneers brushed aside the one-hour, 10-minute delay and swept the team and individual championships in Division 1.

Pioneer edged Plymouth by a slim 107-110 margin, while Foster unleashed a fierce kick to win a three-man battle for the individual title.

Rockford senior Cole Johnson was leading with the finish line in sight, but Foster stormed from behind to take the lead with about 20 yards remaining. Foster crossed the line in 15:16.1, Johnson was second in 15:18.2 and White Lake Lakeland junior Harrison Grzymkowski was third in 15:18.4.

“I realized it was coming down to the end,” Foster said. “I saw he was fading, so I tried to catch him. There was also someone right behind me. I just gave it everything I had at the end, just to see what happened. Cole’s such a good runner. I didn’t think it was possible.” 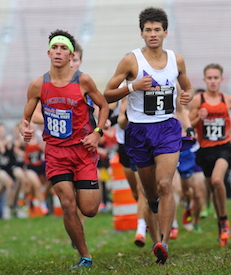 It was the sixth team championship for Pioneer, which last won in 2008.

“That’s more important to me than winning individually,” Foster said. “I just know if I get first, that’s the best I can do for the team. We have such a strong team this season with a lot of seniors. I wanted to do it for them.”

By coming in second, Plymouth had the best finish in school history, eclipsing third-place finishes in Class B in 1944 and 1947. The Wildcats hadn’t finished in the top 10 since taking 10th in Class A in 1961.

Led by sophomore Carter Solomon’s fifth-place overall finish in 15:24.2 and with only one senior in the top six, Plymouth might improve upon that showing next year.