But, perhaps as expected, it was much more.

Plotkin crossed the finish line in 17:20.7, winning his fourth MHSAA Finals championship and becoming just the second boys cross country runner to do so, joining Central Lake’s Ryan Shay who accomplished the feat in Lower Peninsula Class D from 1993-96.

"I tried to get under 17 minutes, but going under 17 is hard to do on this course," said Plotkin. "There's a lot of rolling hills out there. It's a very deceptive course. I just tried to run this like any other race, and it paid off. I tried to focus and do what I needed to do."

Plotkin was followed at Gentz's Golf Course in Chocolay Township by Cedarville senior Thomas Bohn, who finished runner-up for the third straight season and this time in 17:31.1. Brimley junior Cameron Hoornstra was third at 18:00.5.

Rudyard was crowned Division 3 team champion for the first time in a decade with 72 points, followed by Dollar Bay with 93 and Brimley with 96.
"This was kind of a surprise for me," said Rudyard coach Mark Rice. "I thought we could be runner-up. We depended a lot on our No. 5 runner (sophomore Ross Malaska), and he came through for us. Hayden Mills (who placed fifth at 18:20.1) was working with a little bit of an injury issue a few weeks ago, which I think came from running too many races. We're going to revamp our schedule next year." 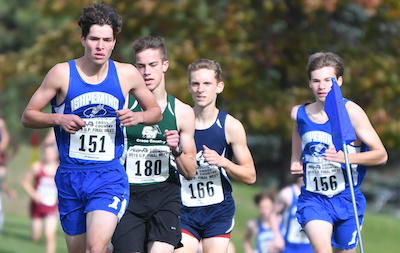 All aboard. Here comes the Hematite train!

The Ishpeming boys, who call themselves that, chugged to their second straight Upper Peninsula Division 2 cross country championship Saturday with 27 points.

The title also was the fifth in six years for the Hematites, who were followed by Ironwood with 51 points, Gogebic (Wakefield-Marenisco/Bessemer) at 67 and Norway at 92.

"My wife (Christie) and I start them off in grade school," said Ishpeming coach P.J. Pruett. "When cross country season starts, they're ready to go. Our program is very solid. We have a lot of runners coming back next year. The future looks bright."

"The wind picked up for our race, which made it very challenging," said Broberg. "But I still won, and running into the wind makes it that much more satisfying. I wanted to go out hard, and the first 800 (meters) was very fast."

Cavagnetto's time was three minutes, 20 seconds better than a year ago.

"I wanted to go out fast and stay with Jonah and Adam, and I think it worked out very well."

Marquette secured its first Division 1 title in five years with 51 points, followed by 2018 champ Sault Ste. Marie with 57 and Houghton with 63.

"We've alternated No. 1 runners throughout the year and (senior) Hogan Nemetz was our top runner today," said Marquette coach Kyle Detmers. "Sault was right there. Hats off the (coach) Jim Martin. They have a great program, and Houghton has a real good team. 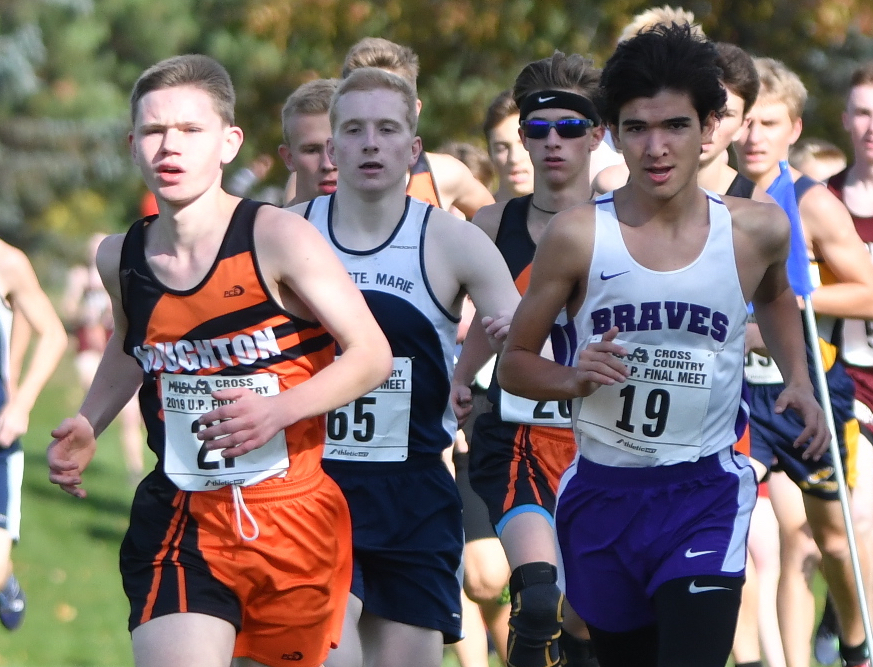 "I appreciate the Gentz family allowing us to use their facility. This is an excellent setting for a meet. I also appreciate the efforts by our athletic director Alex Tiseo, assistant coach Mike Leanes and the many volunteers."

"I wanted to stay with the front pack in the beginning," said Wood. "I ran with Giovanni for a while, then I made my move a little after the mile mark. I felt I could break away.

“It feels good to get a PR (personal record). This is definitely a confidence boost and a good way to end the season. Our whole team did pretty well."

Mathews said he was pleased with the overall conditions.

"The weather conditions were great today," he added. "The only problem is it was real windy. We (freshman Drew Hughes and Mathews) had a pretty big gap in the beginning. Only, I think Joe could sense I was feeling it. A couple times, I almost stopped. Joe was in a little better shape today."