BROOKLYN — Zachary Pettinga of Saugatuck lost the race, but didn't lose his sense of humor.

Explaining the decisive move made by Evart's Santana Scott, Pettinga said, "The top of his head blinded me. I lost my footing and everything."

Scott was rocking a look that made him look more like a senior citizen than a high school senior, with the top of his head shaved completely while keeping the hair on the sides and back.

The things high school kids will do in the name of team bonding.

"It's a team thing," Scott said. "We do it every year. I was a senior, so I got to decide, me and a couple other seniors. We thought this would look cool."

Despite the crazy look, Scott was all business when the gun went off.

He separated himself from Pettinga in the second mile to win in 16:05.7 in the MHSAA Lower Peninsula Division 4 championship race Saturday at Michigan International Speedway. Pettinga's second-place finish in 16:22.2 led Saugatuck to the team championship by a 51-92 margin over Bear Lake/Onekama. Harbor Springs was third with 179 points. 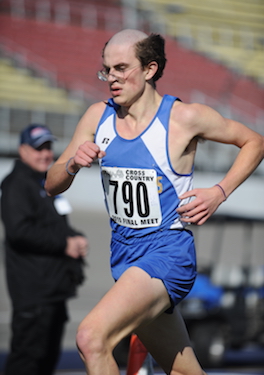 Scott became only the second MHSAA cross country champion for Evart, the first coming in 1952 when Gaylord Denslow was the Class C-D champion with a two-mile time of 11:02.1. Scott has talked with Denslow, who still lives in Evart.

"He's pretty cool," Scott said. "He gives me lots of running advice. He says just be one with your team and run for your team, not for yourself. That made a big impact this year."

"Last year I just ran my heart out," Scott said. "Today it was to win. I didn't get the time I wanted, but races happen. I think it's actually windier than last year."

Saugatuck will probably be favored to repeat after winning Division 4 for the second time in three years. The Indians had five juniors, a sophomore and a freshman in a lineup that put five runners in the top 15. Pettinga and fellow juniors Nick Butch and Orlando Carrion were on Saugatuck's 2013 championship team and 2014 runner-up squad.

Bear Lake/Onekama had three runners across before Saugatuck, but didn't have the Indians' strength at the No. 4 and No. 5 spots. Bear Lake/Onekama has been creeping closer to the top, placing ninth in 2012, fourth in 2013, third in 2014 and second in 2015.

PHOTOS: (Top) Saugatuck’s Orlando Carrion (919) pushes toward the finish with teammate Keegan Seifert following close behind; they finished 14th and 15th for the team champion. (Middle) Evart’s Santana Scott improved from runner-up in 2014 to claim the individual title. (Click for more from RunMichigan.com.)