MUNISING — The Sault Ste. Marie boys made a statement in the wind and cold Saturday, earning their first Upper Peninsula Division 1 cross country championship in six years with 42 points.

Sault, which placed five in the top 14, was followed by reigning champ Houghton with 65, Gladstone 70 and Marquette with 71 points.

“This is the first time all seven of our boys ran together all year,” said Sault coach Jim Martin. “We’ve been banged up all year, but the kids never stopped believing. The parents were very supportive, and the kids were great to work with. They never complained. We knew Marquette would be tough, and Houghton really came on late in the season.” 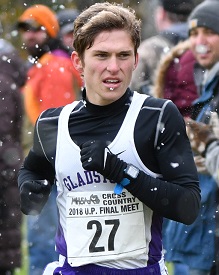 “My time wasn’t the greatest, but I’m happy with it,” said Bruce. “I’m proud of the way our team ran. If Marquette hadn’t pushed us all year, this wouldn’t have happened. We have a lot of work to do, but we’re pleased. I think this will give us awesome motivation for track.”

Ishpeming completed its first perfect season in school history, taking its fourth title in five years with 32 points. The Hematites were followed by defending champ Gogebic at 47 and Newberry with 70.

“The guys were pretty motivated,” said Ishpeming coach P.J. Pruett. “When one made a mistake, another picked it up. We’ve been doing two meets a week for six weeks. The kids were pretty tired, but they still picked it up.

“We never had any injuries this year. We’re 10 deep and went back and forth all week about who would run today.”

Gogebic senior Uriah Aili earned his first Finals title with the day’s fastest time (17:02.5). He was followed by classmate Devon Byers (17:16) during a snow squall off Lake Superior.

“Devon and I were going to run together and see what happened, and we started pulling away at about 1 1/2 miles,” said Aili. “(Ishpeming) really did good. We had the numbers, but they were just a little better overall.

“It’s awesome to go out this way (as a U.P. champion), and running with my teammates was even better.”

Chassell took five of the top 13 places and claimed the D-3 title for the fourth time in five years with 41 points, followed by 2017 champion Brimley with 54 and Rudyard with 72. 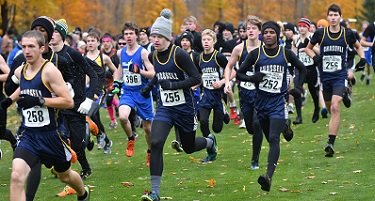 “We anticipated a close race, and our guys wanted to regain the title,” said Chassell coach Marco Guidotti. “All our guys did their best to take the places we needed, and we had some youth really step up.”

“It was quite windy and cold,” said Plotkin. “After the first loop we could feel a lot of heat from the sun (during its brief appearance), but my kneecaps went numb.

“Thomas ran with me most of the way. I was waiting for the wind to be on our back, and that momentum carried me into the home stretch.”

PHOTOS: (Top) Gogebic's Uriah Aili (217) leads the Division 2 pack Saturday with Ishpeming's Spencer Giroux (161) and their teammates Devon Byers (219) and Jonah Broberg (159) following close behind. (Middle) Gladstone's Adam Bruce heads down the home stretch on the way to finishing first in Division 1. (Below) Chassell placed five of the top 13 in Division 3; here Ben Tuomi (258), Kurtis Kytta (255), Gabe Torola (257), Kolson Kytta (254), Abraham Gockenbach (252) and Elijah Soumis (256) break out of the start together. (Photos by Cara Kamps. Click for more at RunMichigan.com.)