BROOKLYN – Getting beat by Coleman Clark occasionally last year only made Mason Sumner a stronger runner.

Sumner, a sophomore at Breckenridge, competes regularly against Clark, a junior from Carson City-Crystal, because both schools are in the Mid-State Activities Conference.

They took their individual rivalry to the biggest stage in the state Saturday, dueling for the championship in the MHSAA Lower Peninsula Division 4 Final at Michigan International Speedway.

“It’s nice to have that competition there,” Sumner said. “Last year, it was definitely back and forth a lot. He had the edge last year in wins. I built up my experience in racing and was able to win more this year. It’s nice to have that in earlier races and every race in the season, because then you’re used to it by state. You don’t get nervous and stuff.” 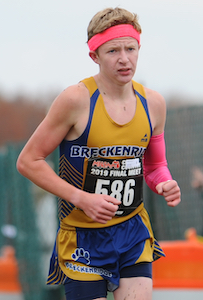 Clark, who was the conference champion as a freshman, welcomes the challenge from Sumner.

“It’s really nice having that competition at every meet,” Clark said. “When I was a freshman, he was in eighth grade, so my conference meets were really easy. I didn’t have competition. When he came up last year, I’ve had a lot of competition in conference meets. It pushes me to be better.”

Sumner and Clark sat back while Carlos Gascho of Johannesburg-Lewiston set the early pace. They pulled ahead at the two-mile mark, then Sumner made his move a half mile later.

“It went how I wanted it to go,” Sumner said. “I wanted to just sit there and kick. It was going to come down to who could kick at the end.”

Sumner led Breckenridge to its first MHSAA championship since the Huskies won Class C in 1976.