However, it was the perfect motivation to end the season the same way as last year.

The Warriors won their second-straight Lower Peninsula Division 2 Final on Saturday at The Meadows at Grand Valley State.

Gull Lake’s Bryce Wheeler won individual medalist honor with a stellar 138, which was four under par for the weekend.

Brother Rice led by only four strokes entering the final round, but pulled away throughout Saturday.

The Warriors were led by junior Lorenzo Pinili, who fired a 3-under-par 68 to finish the weekend at 144 and tie for second individually with Spring Lake senior Evan McDermott (71-73).

“I think we had a tough day yesterday as a team,” Pinili said. “We thought we should’ve played a little better so we kind of took that and just put it as a goal to play better and not make the same mistake. I’m proud of how the team played today.”

Pinili was the only golfer in the field to shoot under par Saturday, and was 5-under-par through eight holes.

“I started off really hot,” he said. “And that just gave me so much room to work with. I got a little tired at one point, but then I got it back and finished strong.”

“It was close at the top, but the whole team just settled down and we talked about how tomorrow (Saturday) is a new day and we are going to play better,” Baer said. “We played like we knew how to play, and we really came together to get this win.”

The Warriors had won last year’s Final by 28 strokes, but associate head coach David Sass knew it was going to be more competitive this time.

“There were a lot of quality players in this field, and I think Division 2 golf is tough; it’s good golf,” Sass said. “It feels incredible to go back-to-back, and it’s hard to do.

“It was a battle the whole way, and it kind of turned into a test of who could get mentally focused the most. This course is extremely difficult, and big numbers are waiting for you on any hole. We bounced back after bad holes and played extremely well. I’m so proud of the way they performed.”

Wheeler, who didn’t place in the top 10 a year ago at the Final, shot a first-round 67 to grab a four-shot lead and then held off a group of competitors to win his first state title.

He closed with an even-par 71.

“Expectations were pretty high coming into this, and obviously I’ve had a pretty good year,” Wheeler said. “I think it’s all about preparation, and I had nearly two weeks of preparation for this. 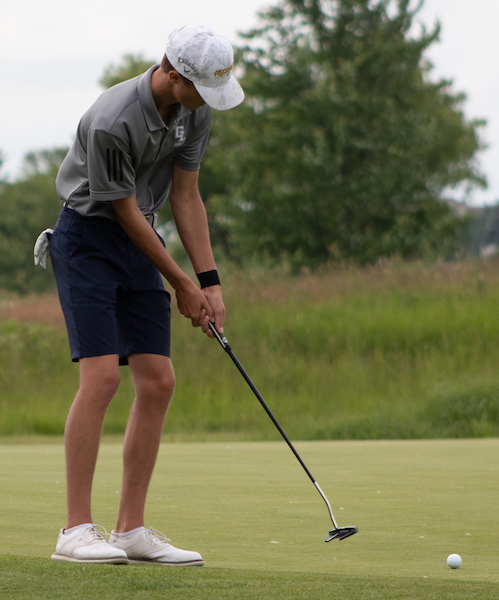 “I definitely felt like I had the potential to do this, and I just feel grateful to be able to do this. It’s awesome.”

Wheeler’s lead was shaved to one early in the round, but he made back-to-back birdies. He said he knew where he stood the entire way.

“I always look at the leaderboard, and I think it helps me because I feel like I do better under pressure,” Wheeler said. “I was nervous on the first hole because I never had to keep a lead before, but I just had to keep my head down and keep grinding.”

He finished his round getting up-and-down for par from the left rough on No. 16 and drained a six-foot putt.

“That was pretty cool, and I definitely wanted to make par on that last hole just to end the weekend,” Wheeler said. “It felt good for it to go in.”

Wheeler helped carry Gull Lake to its best Finals’ finish in school history, and his team accomplished the feat with an impressive final round.

The Blue Devils entered the day in sixth place, but moved up the leaderboard with stellar play and timely putts.

They fired a 312 on Saturday and also were led by freshman Hank Livingston, who had an 11 on the first hole but recovered brilliantly to shoot a 79 and 157 for the tournament.

“The kids never gave up, and they just kept going,” Gull Lake coach Thurman Walters said. “Everybody had rough patches, but we knew that if we play our best and make the best score you can then you give yourself a chance. I’m really proud of these guys, and it was definitely  a lot of fun.”

Walters also was thrilled with his No. 1 player’s effort.

“I’ve never seen anybody work like he does on his game,” he said. “You can’t have a kid with a better work ethic, and now we have to find him a school that will open their eyes and say, ‘Hey, this kid is pretty good.’”