EAST LANSING – Until Saturday, Clarkston Everest Collegiate had never won an MHSAA Finals championship in any sport during the school’s eight-year existence.

That all changed during a five-hour round of golf Saturday afternoon, as its boys team lapped the field en route to capturing the Lower Peninsula Division 4 championship at Forest Akers West on the campus of Michigan State University.

The Mountaineers fired a two-day total of 637 followed by Kalamazoo Christian (665). Muskegon Catholic was third at 685, Mount Pleasant Sacred Heart fourth at 690 and Clinton rounded out the top five with a 692.

Everest Collegiate used a strong second day to run away from the field after firing a 317 to take a two-stoke lead into the second round. The Mountaineers were followed closely by Kalamazoo Christian (319) and Sacred Heart (328) during Saturday’s round.

Everest Collegiate coach David Smith credited the strong start in the opening round to his golfers focus heading into the Final. That, coupled with making clutch shots, allowed the Mountaineers to pull away late in the second round.

"The memories from this day will last a lifetime,” Smith said. “We will go down as the first state championship team in school history. It doesn't get any better than that.

“It’s amazing,” he added. “This is such an amazing group of young men to be with.”

Everest Collegiate had never played the championship course until Friday. Smith was being honest when he said he didn't know what to expect before the opening round of play. But to see the team grow up this weekend nearly moved him to tears.

"You can teach the kids the basics of the game, but to watch them make shots in critical situations and just watch them grow as players is something you can't teach," Smith said. "My senior Tyler Rozwadowski came in and nearly won the whole thing as an individual player, and he never saw the course before until now. It's stuff like that which makes this victory even more impressive. I couldn't be prouder." 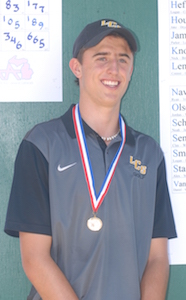 Taking the medalist honor was Lansing Christian sophomore Parker Jamieson, who fired a 71-76 two-day total of 147. Rozwadowski finished with 149 strokes, followed by White Pigeon's Jordan Olsen, Kalamazoo Christian's Colin Sikkenga and Collin Powers of Muskegon Catholic Central, who all tied for third at 154.

Jamieson, a Lansing native, is no stranger to the Forest Akers courses, and he played West as a veteran over the past two days. Needless to say he is already thinking about next year's tournament, as it will be played at Forest Akers East.

"I can't help not to think about coming back to Forest Akers next season and repeating," Jamieson said. "I really battled the heat out there Saturday, but so did everyone else. I focused on making good shots, making every shot count out there. It was definitely a grind."

"I came into Saturday's round with a number in my mind that I wanted to shoot and I almost hit that number, but I came up a little short," Rozwadowski said. "I would have loved to have won the individual championship, but I wouldn't change anything winning a team title with my guys. This is pretty special."